30 years ago today WrestleMania 2, one of the most infamous and controversial WrestleMania’s ever, took place. To mark the occasion Throwback Thursday on WrestlingDVDNetwork.com takes a look back at the good, the bad, and the ugly of one of the most polarizing events in WWF/E history, as seen, where else, but on the WWE Network.

WWF WrestleMania 2: What the World Has Come To (WATCH) 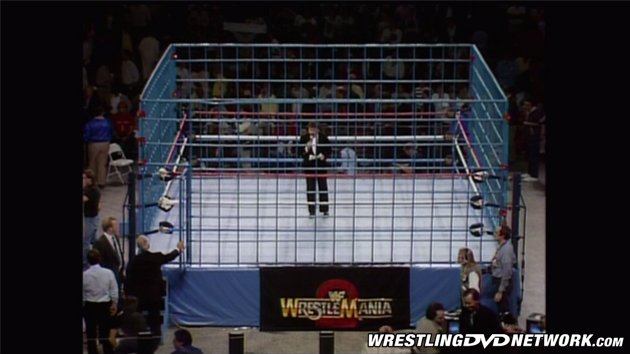 CHAMPIONS AT THE TIME:

Vince McMahon welcomes us from New York and introduces guest commentator Susan Saint James. After Ray Charles’ stellar rendition of “America the Beautiful”, “Mean” Gene, from Chicago, breaks down the New York card, after which we get a promo from Roddy Piper about the upcoming “boxing match” against Mr. T.

Just as this match finds its pace, it’s over, and the New York fans aren’t happy about it. After Orndorff’s foot gets caught in the ropes the two brawl to a double count-out at 4:15. Afterwards chaos reigns as no one knows what’s going on.

Next up we get a promo from Mr. T about the upcoming “boxing match” while in the background Howard Finkel announces the result of the first match. 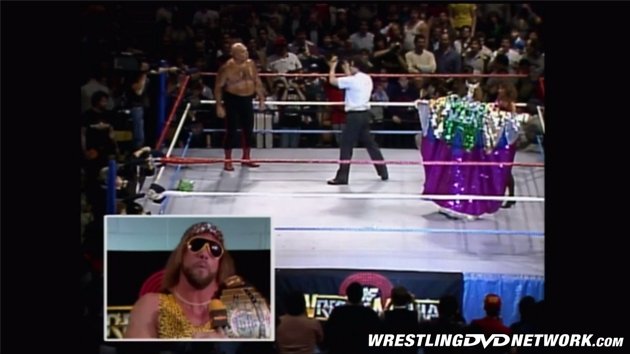 This was one of the hottest angles in the Federation at the time. This isn’t a very good match, per se, but it’s fun while it lasts. The match is notable for Steele being one of the very first to kick out of Savage’s flying elbow drop on TV. Moments later, with the help of the ropes, Savage pins Steele at 7:09 to retain the Intercontinental title.

Between matches we go to Chicago for a physical promo between Bill Fralic and Big John Studd while back in New York Vince and Susan discuss snakes.

This one isn’t much of a match. Though fast-paced and physical it’s pointless as the opener. The undefeated Roberts catches Wells coming into the ring with a knee lift and then hits a crushing DDT for the pin at 3:06. After the match Jake wraps the snake around Wells who nearly vomits in the center of the ring.

Up next is a video package highlighting the Piper/Mr. T feud followed by a promo from Hulk Hogan in L.A. about the main event. 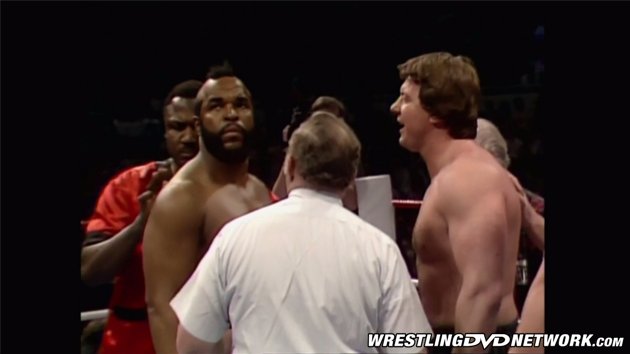 There’s not much that can be said about this train wreck that hasn’t already been said. This main event turned into a comedy of errors and has gone down as one of the worst matches in WrestleMania history. In the end Piper bodyslams Mr. T at 1:17 of the 4th round, giving Mr. T the win by disqualification.

Now we move to the Chicago portion of the event where Gorilla Monsoon, “Mean” Gene Okerlund, and Cathy Lee Crosby greet us and talk about the show.

Not much of a match here. After some dropkicks and running off the ropes Velvet misses a crossbody from the second rope, nearly lost her top, and is pinned by Moolah at :59. The Chicago crowd is not happy. 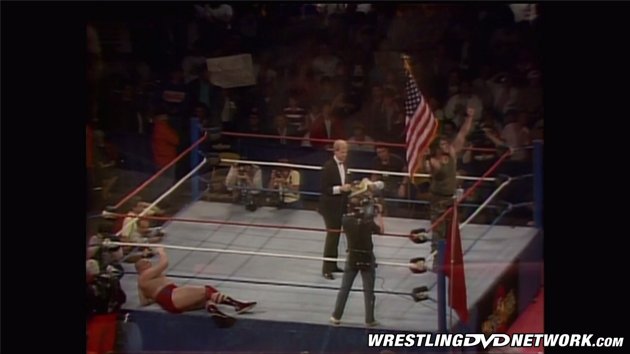 The introductions are longer than the match, which is nothing more than punches and kicks. The two brawl until the referee is knocked down and Blassie tosses the cane to Kirchner by mistake. The Corporal waffles Voloff and scores the pin at 1:36. After the match Kirchner waves the Stars and Stripes.

This isn’t that bad of a match, and in terms of a “Battle Royal” it’s one of the better high profile incarnations. Clearly the intention was to put Andre over but Bret Hart was arguably the biggest star coming out of this match. Bruno Sammartino, meanwhile, looks lost for much of the match. In the end Andre tosses Bret Hart on top of Neidhart for the win at 9:11.

Next we go back to New York for a classic promo from Roddy Piper then back in Chicago for promos from Jimbo Culver and The Iron Sheik about the outcome of the “Battle Royal”. 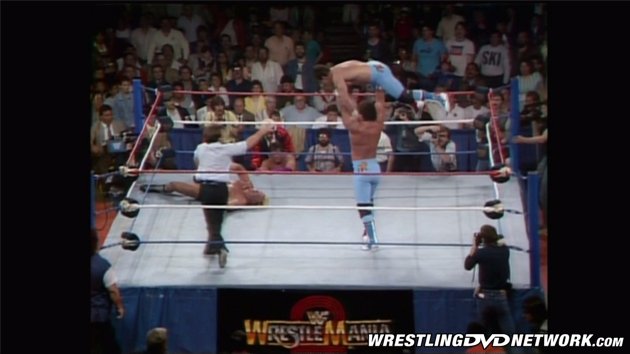 One of the best tag team matches in WrestleMania history, this one doesn’t depend on old-school tag team psychology to tell a great story. This is the match that saved this event to be sure. After Valentine collides with Dynamite in the corner Davey Boy scores the pin at 12:28, winning the first and only WWF Tag Team title for The Bulldogs (a 294 day reign) and ending The Dream Team’s lone WWF Tag title reign at 226 days.

After promos from Capt. Lou, Ozzy, Davey Boy, and Cathy Lee Crosby we go back to New York where Vince and Susan Saint James send us to Los Angeles for the final portion of the card where Jesse “The Body” Ventura, “Lord” Alfred Hayes, and Elvira welcome us.

This is the best of the meaningless matches of the night. Both Hercules and Steamboat look great, and their prime positioning on the card and the booking of the match suggest that Vince McMahon was more than high on both men at this time. After a solid back-and-forth match Hernandez catches Steamboat’s knees coming off the top allowing “The Dragon” to hit the flying crossbody for the pin at 7:34. 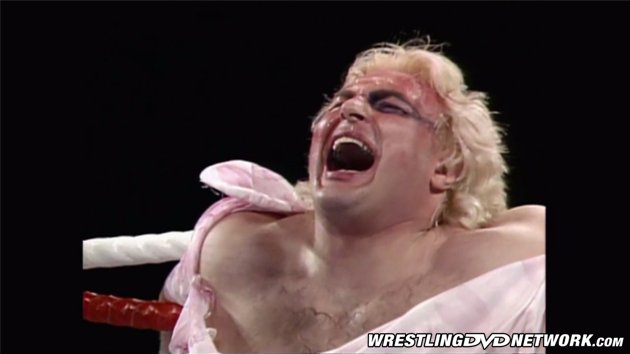 This is the comedy portion of the show. Adonis’ “Adorable” gimmick was relativity new, and groundbreaking for the time. Uncle Elmer, on the other hand, was all but done with the WWF, leaving after the May 3rd SNME VI. After the antics and whatnot Elmer misses a leg drop allowing Adonis to climb to the top and land a splash for the pin at 3:05.

Up next we get another vintage Hulk Hogan promo with “Lord” Alfred Hayes about the upcoming “Cage Match” main event.

Though the Funks had been making life for JYD difficult there wasn’t all that much of a story leading into this one. Unlike the tag title match this is more of a traditional “rasslin'” tag team match with Terry Funk going all-out. After a back-and-forth battle Terry Funk brains JYD with Hart’s megaphone to score the pin at 11:43 in a bout that if not for the tag title classic would be the match of the night. This really is a helluva match.

As we see the ring crew struggle to bring out the big blue cage (created specifically for this match) we take a look back at the history of the Bundy/Hogan feud before hearing from Heenan and Bundy. Back in New York Vince and Susan Saint James discuss the main event and the possibility of “Bundy-Mania”. 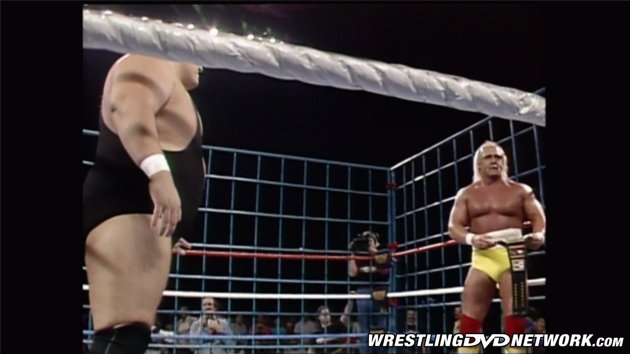 This match is often cited as one of the worst WrestleMania main events ever. The match, however, isn’t nearly as bad as many make it out to be. Violent, bloody and short, this match delivered the perfect blow-off to the Hogan/Bundy angle. It’s not perfect, but the match delivers in terms of action and was the key reason 40,000 fans in three time zones left their homes to see it. After power slamming Bundy and kicking the big man away, Hogan scales the cage and escapes with the WWF title at 10:15. After the match Hogan bounces Heenan around the cage and celebrates until the show abruptly cuts to black. 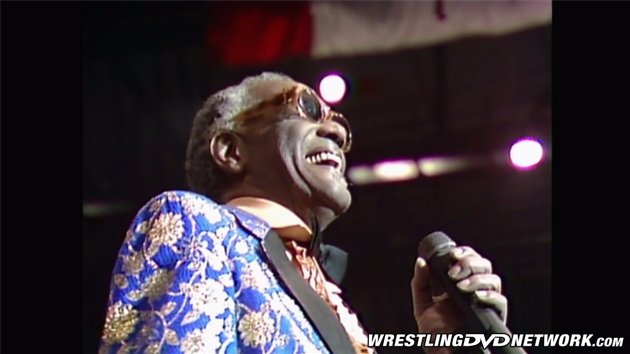 That’s all for TBT this week – thanks again for reading! So, are you a WWE Network subscriber? Then check out WrestleMania 2, see the event for yourself, and let us know what you think.

And a quick shoutout to the guys over at WWENetworkNews.com delivering great news, updates, reviews, and opinions on everything WWE Network: for fans, by fans.

Whether it’s WrestleMania 2, WrestleMania 32, or any other Mania they’re all on WWE Network for only $9.99 per month. Your first month is FREE! Click here to subscribe to the WWE Network.