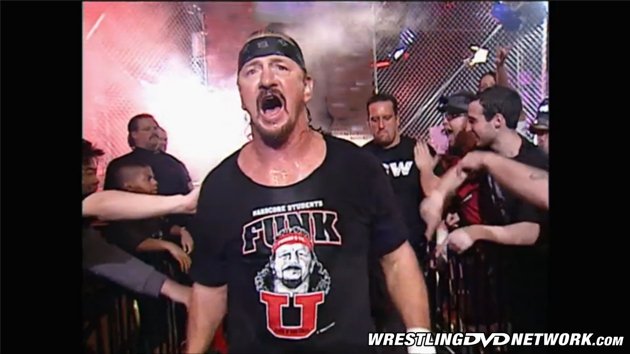 Throwback Thursday celebrates by taking another trip through the archives of the WWE Network, this time to find forgotten classics in Terry Funk’s 50-year career.

By the time Funk debuted in the WWF in July of ’85 he’d been wrestling for 20 years and had even retired in Japan in 1983 (the legendary AJPW “Forever” promo). This match with Junkyard Dog, part of the most notable feud of “The Funker’s” short WWF run in the WWF, is classic Terry Funk. 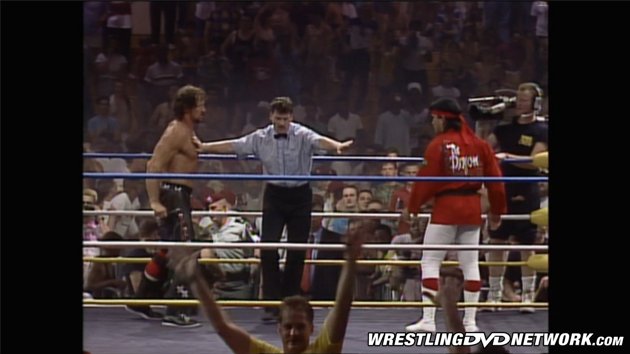 After leaving the WWF in 1986, Terry Funk returned to AJPW before taking most of 1988 off to make films, including Road House. In 1989 Funk returned to NWA-WCW and began a legendary war with World Champion Ric Flair. Before that feud could begin in earnest Funk would do battle with former World Champion Ricky Steamboat in a classic encounter that marked Funk’s first high-profile match in NWA-WCW and set the tone for Funk’s run in 1989. 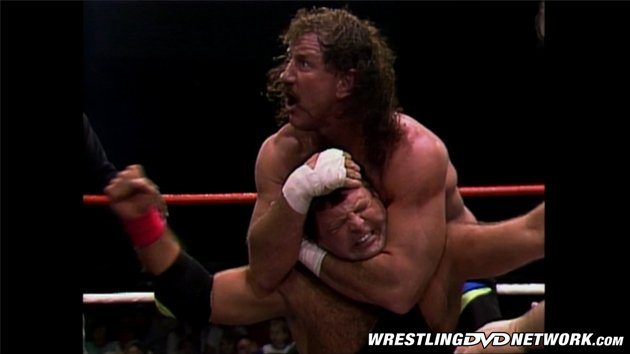 One of Terry Funk’s greatest rivals has been Jerry “The King” Lawler. Funk’s most recent retirement match, in fact, was against Lawler on October 24, 2015. Back in 1990, however, the Funk/Lawler feud was over the USWA Unified World title. The two met in the semi-finals of the 21-man tournament to crown a new USWA Champion on October 8, 1990, with Lawler defeating Funk by DQ. On November 5, 1990 Funk took the title from Lawler, setting up this wild war of a rematch. 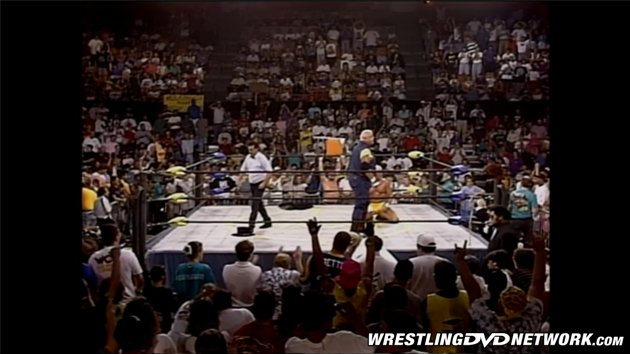 Terry Funk’s career began to rise in the early ’90s thanks to independent promotions in the U.S. and Japan, including NWA-ECW and FMW. Funk returned to WCW in May 1994 at the Slamboree ’94 event, joining The Studd Stable that night. This match, a solid, stiff fight of a match, helped set the stage for September’s Fall Brawl PPV event and the last truly old school “WarGames” in WCW history. Plus, Dusty breaking the wooden chair over Meng’s head never gets old.

After WCW, Funk returned to the independent scene and to NWA-ECW, where by 1997 Terry Funk was Paul Heyman’s hardcore Babe Ruth. Airing a week before ECW’s very first PPV (Barely Legal), where Funk was set to battle Sandman and Stevie Richards for a shot at ECW World Champion Raven, “The Funker” teamed with Tommy Dreamer for a classic ECW war that set the stage brilliantly for ECW’s biggest main event, to that point, in company history. 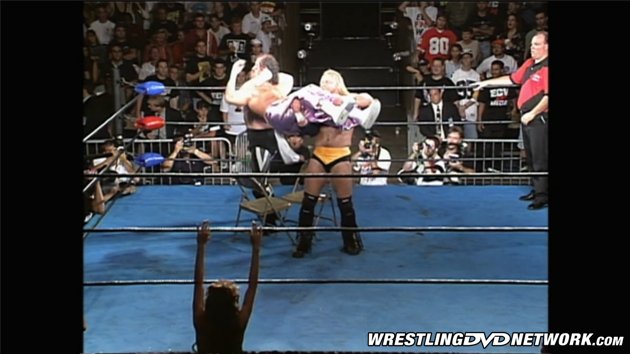 Eight days before this event Terry Funk lost the ECW World title to Sabu in a brutal, unforgettable “Barbed Wire Match” (0:00 – 3:57) at Born to be Wired. This match, the long-awaited rematch of the legendary bout that put ECW on the map in February of 1994, would mark the end, in-ring, for Terry Funk in ECW (a return in 1998 was cut short due to illness). Funk would retire in September only to un-retire a short time later.

After a brief stint in FMW, Terry Funk returned to the WWF for the first time since spring 1986, debuting as Cactus Jack’s partner “Chainsaw Charlie” on the December 29, 1997 edition of RAW. The two would win the WWF Tag Team titles from the New Age Outlaws at WrestleMania XIV in a “Dumpster Match” only for the titles to be held up the next night, setting up this unforgettable “steel cage” rematch to fill the vacancy. 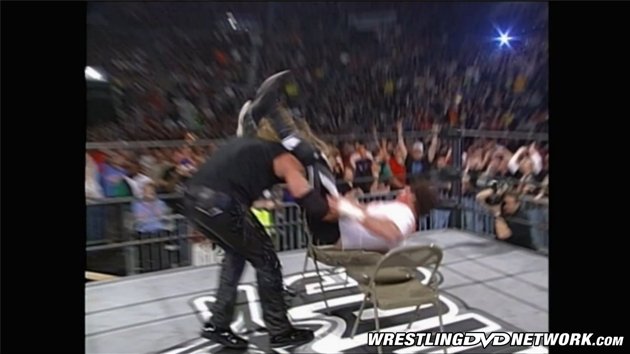 For health reasons Terry Funk took 1999 off. When Funk returned to wrestling in January of 2000 it was as WCW Commissioner, putting “The Funker” at odds with the nWo’s Kevin Nash. This is a wild, bloody brawl that features many memorable spots and a finish as painful to watch now as it was the night it happened.

A large portion of Terry Funk’s final run in WCW involved the Hardcore Championship. This match, Terry Funk’s third and final WCW Hardcore title win, was Funk’s first match since losing the U.S. title to Lance Storm on September 23, 2000. A hard-hitting, chaotic brawl, Funk ended Crowbar’s one and only Hardcore title reign at 39-days with a devastating piledriver on a car door. 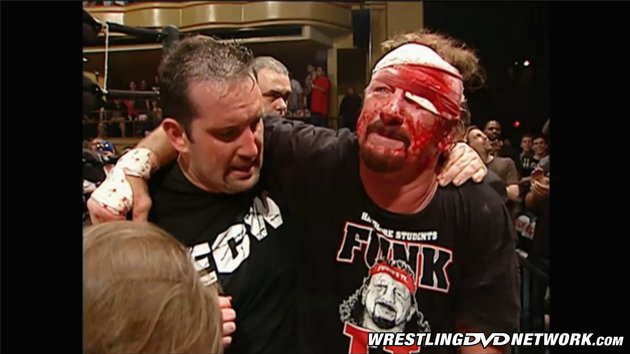 Terry Funk wrestled at Shane Douglas’ Hardcore Homecoming event rather than the inaugural One Night Stand event, choosing principles over money. In 2006, however, the timing and story were right and Terry Funk, in rare form, put on what may go down as the final high-profile fight of an incredible career. Through ladders, barbed wire, fire, and blood, Terry Funk made one last stand for hardcore in the name of Extreme Championship Wrestling.

There was, is, and never will be anyone like Terry Funk again. Ever. From a gifted wrestler and World Champion to a ruthless brawler who took it all and kept getting back up, Terry Funk was one of a kind. “The Funker” can break you heart (35:50) with one promo and have you in stitches (27:00) in another. He’s no legend or icon; he’s Terry Funk. And that’s all there is to it.

As the “Hardcore Legend” turns 72 today WrestlingDVDNetwork.com pauses to wish one of the greatest wrestlers ever a truly happy and wonderful birthday. Thanks for the memories! 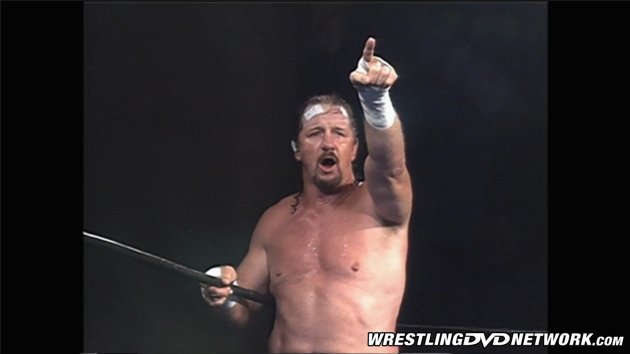 That’s all for this week’s TBT – thank you for reading! Are you subscribed to the WWE Network? Then check out these classic Terry Funk matches yourself, and let us know what you think.

Watch all of this, the Battleground 2016 PPV, and loads more on the WWE Network for only $9.99. Your first month is completely FREE! Click here to subscribe to the WWE Network.