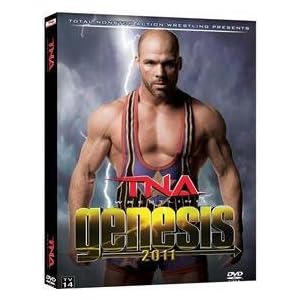 TNA Wrestling’s first Pay Per View of the year is Genesis 2011 and continues with the main theme of the dominance of the Immortal/Fortune stable as they try to win every title in the company.

The show kicks off in usual X Division fashion with X Division Champ Jay Lethal vs. Kazarian where the match starts off at a fast pace before the bell even began, this is your usual high quality spot heavy under card X division championship bout that doesn’t disappoint and makes a great opening contest to start off the pay per view.

With TNA bringing in one of the best women wrestlers in Mickie James the Knockout’s division continues to improve and her match with Madison Rayne doesn’t disappoint as they are given a good 10 minutes to have a decent match which helps continue the feud amongst these divas.

Anytime you get two of the top tag teams in the world together for the straps, your going to get a fantastic match and in the tag team title match involving Beer Money and The Motor City Machine Guns doesn’t disappoint as there are some great spots and because they are given plenty of time to showcase their abilities. It’s a shame we don’t get to see more matches like this and makes the pay per view more interesting to watch.

Former tag team partners continue their feud, as Team 3D/Dudley Boyz they were the face of tag team wrestling for a long time and while both have tried to be singles wrestlers before, this feud has been more of a way of pushing Bully Ray as a singles wrestler. This match as you might expect consists of plenty of brawling but personally I wasn’t that impressed with this one but it is passable.

Abyss had to stand in for an injured AJ Styles so this is a very different match because of that, however I liked how they mixed the styles between the two, the big powerful Abyss and fast technical Williams that just works well as it makes complete and utter sense. It’s a shame they felt they had to have some interference from AJ as the match didn’t really need it. While maybe not the greatest match on the show its not the worst either, for that reason alone I’ll say watch it.

Matt Hardy makes his TNA debut here with his new look and attitude as Cold Blood against Rob Van Dam, this is another fine midcard match that was just a way of pushing Matt as one of the bigger heels of the company and joining his brother in Immortal. There isn’t anything wrong with this match, as RVD hits all his usual spots to keep his fans happy but it’s a shame they had to do the dodgy referee ending to help position Matt as a heel.

I’m still not sure about the MMA Exhibition Match between Jeff Jarrett and Kurt Angle, as they are playing into their real life issues with Jarrett marrying Angle’s ex-wife, this is a believable feud but this felt more like something you might see on Impact and a way of just dragging out the feud, while it might be good for Angle to show his amateur skills this is nothing more than a way of Jarrett getting some cheap heel heat on Jarrett.

The two young main eventers at TNA (Matt Morgan and Mr Anderson) get to put on an impressive match to determine who faces Jeff Hardy for the title and its very obvious that Mr Anderson is being positioned as the top baby face of the company. it’s a shame that this great match simply became a run up to the real main event which turned out to be.

Finally we get to the main event of Mr Anderson vs. Jeff Hardy for the TNA World Title, This was a surprise main event that wasn’t scheduled but with all the issues Jeff Hardy has been having this year they took the decision to book the swerve and have Mr Anderson win his first world title in a quick match where Jeff wore his usual clothes and after having failed interference from his brother at the hands of RVD. It’s a shame they decided not to make this a triple threat match in the first place and advertise it rather than doing the usual TNA routine of thinking everything should be a surprise or swerve. This was a missed opportunity to build towards a proper match between the two but looking back at how Jeff was at the beginning of 2011 its probably a good thing they did do it this way.

The DVD also features a episode of Before the Bell that is a nice addition but nothing that anyone would want to watch again.

Overall: Genesis 2011 has a very good undercard with lots of great matches and a interesting main event as we got a great match between Anderson and Morgan that turned into a much bigger angle with what followed with Anderson beating Jeff Hardy in a impromptu title match. The storyline going throughout the show is that Immortal & Fortune members are under orders to win titles or lose their spot, is a interesting one that sets up the group as the dominant force in TNA but leaves the question hanging over Jeff Hardy’s position following the quick title change at the end of the show. Overall this is a great PPV that has lots of decent matches and nothing that is all that bad.