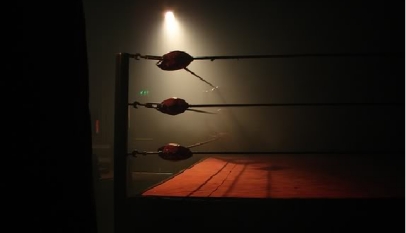 While many of you here know me as the WWE DVD reviewer, I don’t limit my DVD watching habits to only the WWE.  I’ve been a big fan of independent wrestling for quite a while now, and I watch many DVD’s from across various areas of the wrestling world.  Most years, I feel that while there are some great shows and DVD’s from independent companies, the best DVD releases still tend to come from the WWE.  This year, though, many companies stepped up their game in terms of DVD production, from Smart Mark Video to Highspots to Ring of Honor Home Video, and for the first time, I don’t think the wrestling DVD of the year came from the WWE.  I wanted to spotlight some of this year’s highlights, hence the following countdown of my 10 favorite non-WWE wrestling DVD’s of the year!

Before getting into the countdown, I wanted to share a few honorable mentions and omissions.  First off, I did not get a chance to see Memphis Heat, which I’ve heard is excellent and look forward to checking out.  It will not be on the countdown though.  Honorable mentions include ROH’s Glory By Honor XI, ROH’s From Love to Hate: The Jimmy Jacobs Story, ROH’s Bryan Danielson: The American Dragon, Smart Mark Video’s Ultraviolent Beast: The Masada Story, and PWG’s DDT4 2012. 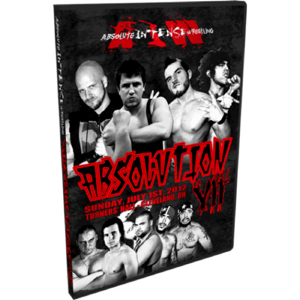 AIW is a smaller Cleveland-based wrestling promotion, and their biggest show of the year is Absolution.  The show had some great matches, including Adam Cole Vs. ACH and The Briscoes Vs. Irish Airborne.  What separated this DVD from others, though, is the great post-production work and video packages included to recap feuds.  Since this is the biggest show of the year for AIW, many of the matches are blowoffs to feuds, and we get some great video packages throughout this DVD recapping the feuds.  Between the great editing work from Smart Mark Video, some great matches, and a fantastic ending, this DVD is one of the best overall packages of the year.

9) CHIKARA Chikarasaurus Rex: How to Hatch a Dinosaur 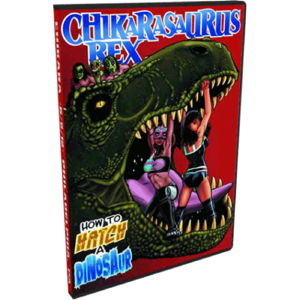 A fantastic show from top to bottom, with no bad matches and great variance between the different match types.  The main event, between The Young Bucks and FIST (Chuck Taylor & Johnny Gargano) is one of the best CHIKARA matches of the year.  You also get a nice payoff to the Tim Donst/Hallowicked feud with a Mask Vs. Hair match, which are always exciting to watch.  If you’ve never seen CHIKARA before, this is one of the best shows to watch to check them out (but more on that later…)

8) Samoa Joe Vs. CM Punk: The Collector’s Edition (Buy It) 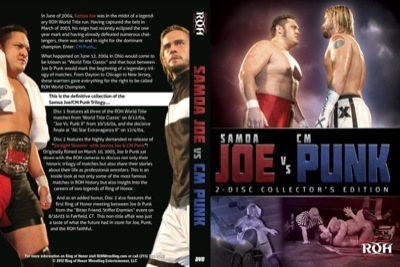 The trilogy between Samoa Joe & CM Punk is legendary, and it’s great that we finally have all three matches on one DVD.  Putting this in a package with Straight Shootin’ with Samoa Joe & CM Punk makes total sense.  After watching the three classic matches, it’s nice to then listen to the two men go into detail about everything that went into the match.  The road stories they tell afterwards are simply a bonus.  Add in an early ROH match between the two, and you’ve got a fun package. 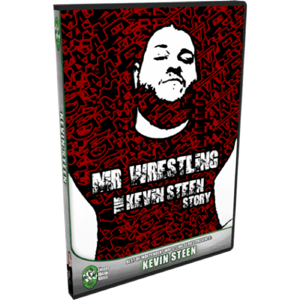 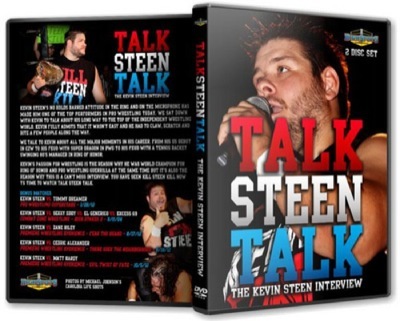 Both Smart Mark Video and Highspots ended up releasing shoot interviews with Kevin Steen within weeks of each other, but fortunately, they both were good and, more importantly, different.  While Smart Mark’s interview is much longer (around 4.5 hours), the one area of Steen’s career it doesn’t put too much focus on is his recent Ring of Honor run.  The Highspots interview, on the other hand, focuses heavily on this aspect of his career.  Both DVD’s also feature bonus matches from Steen.  If you only get one Steen interview, I’d go for the Smart Mark one (Mr. Wrestling: The Kevin Steen Story), but if you decide to get both, rest assured you won’t feel ripped off. 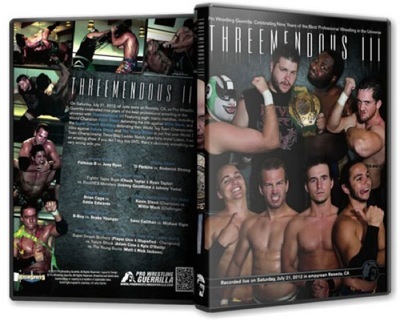 Threemendous III was PWG’s 9th anniversary show, and in my opinion, it was their show of the year.  Everything on this card, from top to bottom, is great.  While PWG has always put on incredible matches, one of their biggest struggles has been storylines and storytelling within matches.  This show helps build up a lot of storylines in PWG, which is awesome to see.  Brian Cage and Willie Mack both cemented themselves as main event level guys here.  The main event, a three-way tag team ladder match featuring the Super Smash Brothers, Future Shock, and The Young Bucks, should have been a total spotfest, but actually told a really solid story. 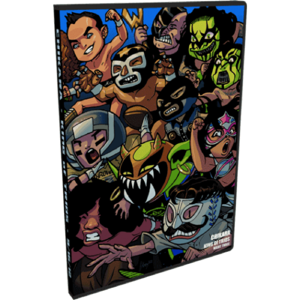 First, I need to admit a bit of bias with this pick, because I was at this show live, and it was the best live wrestling experience I’ve ever had.  Watching this show back on DVD, though, it is as good as I remember it.  The show features what might be the greatest comedy match of all time, one of the greatest women’s matches I’ve ever seen, and a very emotional final match.  Plus, Demolition Vs. The Powers of Pain was a thing that happened on this show, so it has to earn points for that. 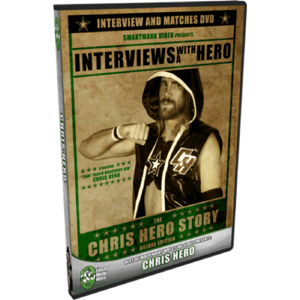 If you’ve ever wondered whether or not a 6.5 hour shoot interview with Chris Hero can remain interesting over the whole run time, I can tell you that it certainly can.  This is a great shoot interview, with Hero running through his entire independent wrestling career.  I will admit that if you aren’t already an indy wrestling fan, the interview may not resonate as much as it did with me.  I thoroughly enjoyed it, though.  The Deluxe Edition features 2 extra discs of bonus matches against opponents like CM Punk, Super Dragon, and Claudio Castagnoli.  I watched this entire DVD set, which runs about 10 hours, in only 2 or 3 days. 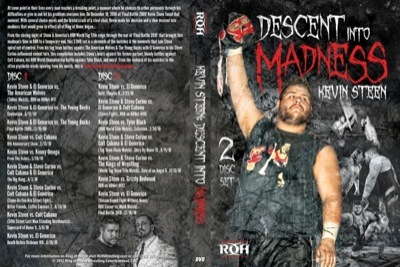 As great as this DVD is, it is also the most poorly marketed wrestling DVD of the year.  While this DVD does show Kevin Steen’s “descent into madness” in ROH in 2010, it also recaps the entire feud between Steen & former tag team partner El Generico.  Almost every match on this DVD is related to that feud in some way.  ROH really should have made this more clear in their advertising.  The feud between Steen & Generico is one of the greatest wrestling storylines of the past ten years (and probably the 2nd greatest storyline in ROH history), and it’s great to be able to rewatch the whole feud in one go. 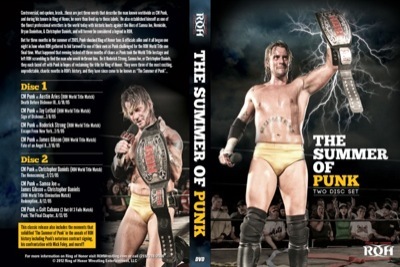 I mentioned above that the Steen/Generico feud is the 2nd greatest storyline in ROH history. Here’s the one that’s better.  After getting signed to the WWE in the summer of 2005, CM Punk won the ROH World Title on what was supposed to be his final night in ROH.  What followed is now known as the “Summer of Punk”.  All relevant matches and promos are included here.  There are some great matches, and Punk delivers some of the best wrestling promos ever.  If you are at all a fan of CM Punk, and want to see where the WWE likely got the idea for last year’s “WWE Summer of Punk”, do yourself a favor and check out this DVD as soon as possible.

1) The Last of McGuinness (Director’s Cut) 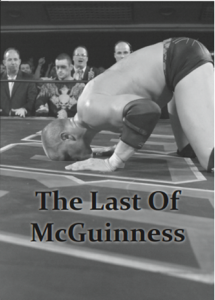 This may be the greatest documentary about wrestling ever made, and is easily the best wrestling DVD released in 2012 (sorry, WWE).  The documentary follows Nigel McGuinness (who briefly wrestled in TNA as Desmond Wolfe) on his retirement tour from wrestling.  Ultimately, the doc is about Nigel coming to grips with the fact that he never made it to the WWE, and thus never achieved his dream he worked so hard to reach.  It’s rare that a wrestling documentary has such a powerful message.  The Director’s Cut features about 2 hours of bonus material cut out of the documentary, which includes a lot of extra stories and funny moments from along the tour.  This documentary goes beyond just “if you’re a wrestling fan, you need to see this”.  This is something that everyone should see.