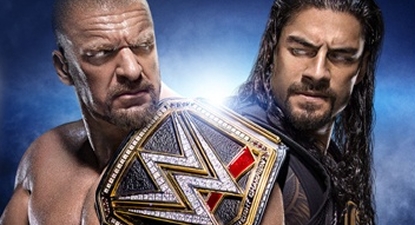 Below, get a look at the official trailer for the WrestleMania 32 DVD/Blu-ray!

We’re now exactly 3 weeks away from WrestleMania 32 hitting stores across the United States — be sure to pre-order your copy of the DVD or Blu-ray by clicking here to Amazon.com.

In the UK there will be 6 separate releases for the WrestleMania DVD/Blu-ray this year – the standard DVD, the standard Blu-ray, the Steelbook Blu-ray, the “Ultimate Collector’s” box set, and two unreported store exclusives. That’s the most ever in case you were wondering!

WrestlingDVDNetwork.com can reveal that the UK store exclusives will be found at ASDA and Sainsbury’s. Both shops will be stocking WrestleMania 32 DVDs that have exclusive cover variants that differ to one another. All of the 6 editions we’ve mentioned will hit the UK on June 6th.

As for fans in the United States, FYE stores will most likely be offering a store exclusive WrestleMania 32 DVD with dog tags included inside the packaging. As you may recall, FYE’s exclusive has been a yearly tradition dating all the way back to the WrestleMania 26 DVD.

Shown here is a reminder of the cover and a look at more of the planned artwork. 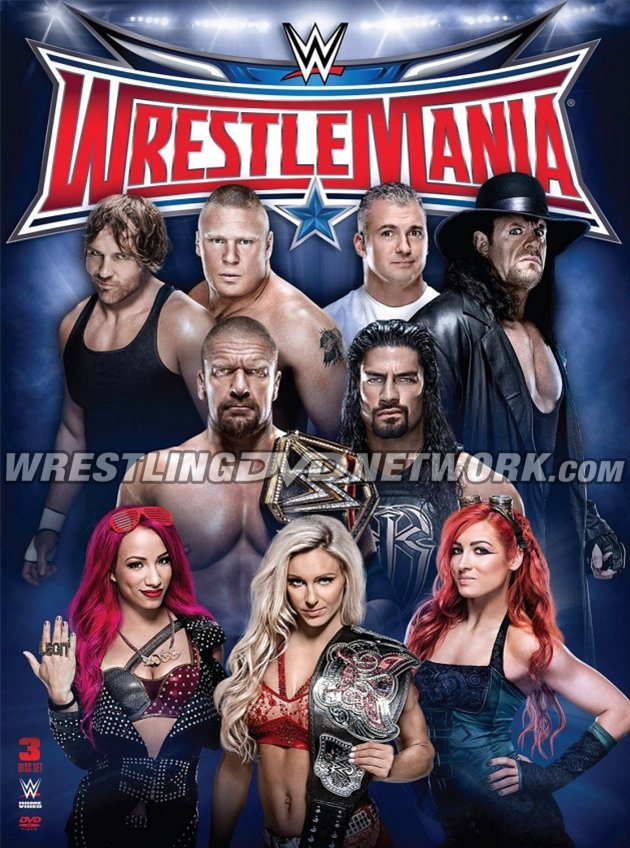 Welcome to the biggest WrestleMania of them all!

The Authority and The Roman Empire clash in the main event of WrestleMania when the 14-time WWE World Heavyweight Champion Triple H defends his coveted title against Roman Reigns. Shane McMahon risks it all for control of Monday Night Raw when he battles Undertaker in a Hell in a Cell Match that will decide both of their fates.

The Divas Revolution comes full circle as Charlotte, Sasha Banks, and Becky Lynch compete against each other in a Triple Threat Match to become the inaugural WWE Women’s Champion. “The Lunatic Fringe” Dean Ambrose faces his biggest challenge to date when he enters Suplex City to face “The Beast Incarnate” Brock Lesnar in a No Holds Barred Street Fight. 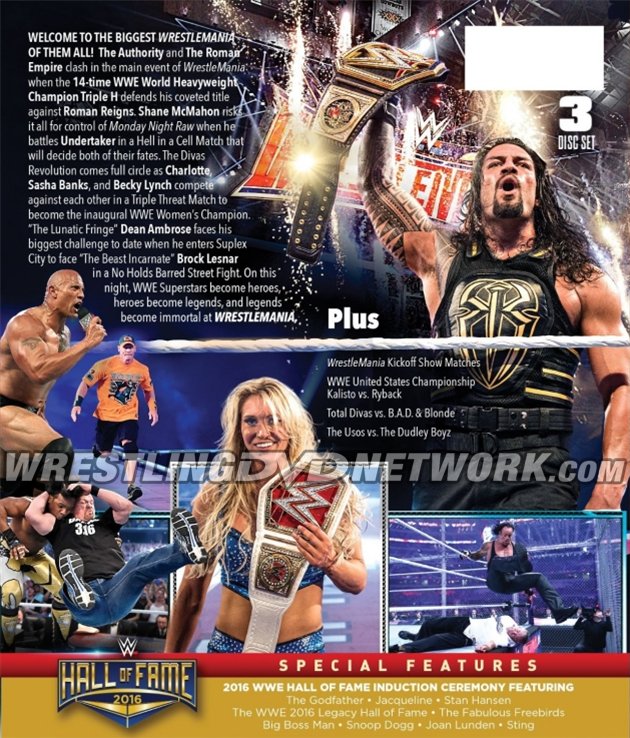 – USA: May 10th. Pre-order your copy now here on Amazon.com.

– Australia: May 18th. Pre-order your copy now over at Madman.com.au.

We noted that WWE just released a “Roman Reigns: Ultimate Fan Pack” to Kmart stores – essentially a budget action figure that also contains a few bonuses, one of which is a DVD.

No word on its content as yet, but here’s a closer look at the cover artwork: 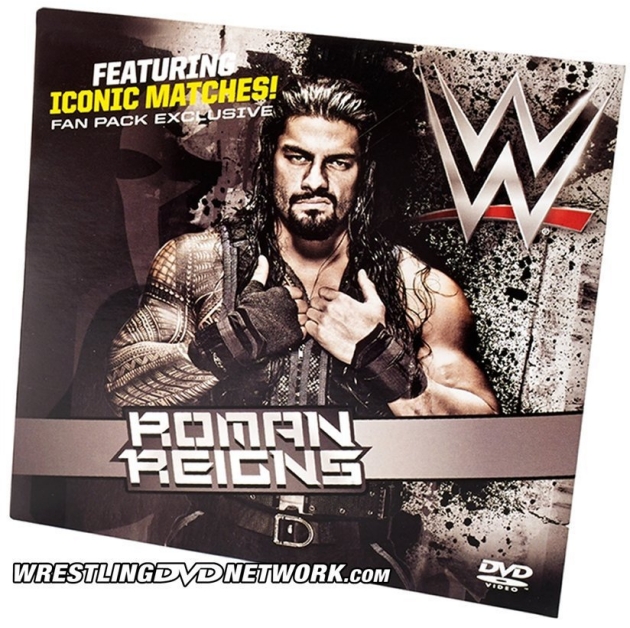 The next WWE DVD incoming is “The U.S. Championship – A Legacy of Greatness”.

JBL is the host as revealed yesterday and he will be shown on the back cover artwork, as confirmed by this new shot of the finished DVD, courtesy of WrestlingSuperStore: 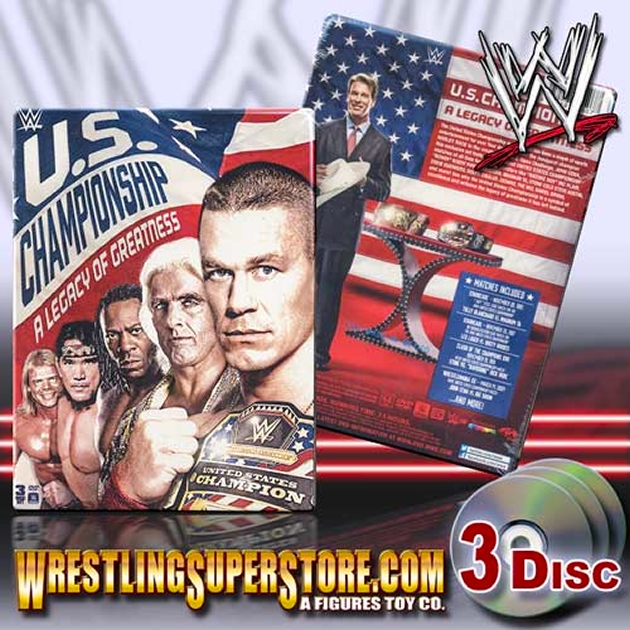 The next WWE DVD landing in the UK is Fastlane 2016, with an exclusive Blu-ray too!

It’s out this coming Monday, April 25th. Fastlane was of course headlined by the Triple Threat Match between Roman Reigns, Brock Lesnar and Dean Ambrose. Watch a clip below:

“Timeline: The History of WCW – 1997”, a 3 hour double disc set featuring Kevin Nash! It won’t be the last you see of Nash on KC DVD sets as they have his “Guest Booker” coming too.

Other titles in the works include a new series called “Bombshells” featuring shoot interviews with the women of wrestling, another new series called “Next Evolution” with Gabe Sapolsky interviewing EVOLVE and DGUSA talent, “YouShoot” with Joey Ryan, along with another installment of “Back to the Territories” which is slated to cover Indianapolis with guest Baron Von Raschke. 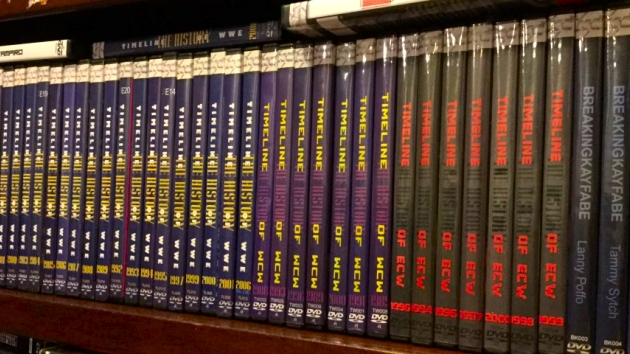