Best PPV Matches 2013 will be released this month!

We can now show you the official trailer. The DVD compilation contains 17 PPV matches spanning from the Royal Rumble to Hell in a Cell. The UK exclusive Blu-ray edition also includes an extra 5 matches on top.

The 3-disc DVD set releases later this month on December 31st! You can pre-order your copy in time for then with Amazon by clicking here.

Many readers have asked us about the status of the full year 2014 schedule and when it will be made public. We’ve heard from a reliable source that plans simply aren’t solid enough yet.

This time around WWE have been more heavily researching ideas with the help of the several surveys issued to fans. Below is a full list of the DVD ideas found in the recent surveys. Two of them (“Best of WCW PPVs” and “Music of WWE”) are confirmed for release.

FYE have now officially announced the Buy 1 Get 1 Free sale they have running on WWE DVDs, which we’ve been reporting on recently. It is valid in-store only.

There’s some confusion at WWEShop.com with regards to orders placed for the new RAW box set. Given that they had a big surge in orders the product was back-ordered. Jeffrey Evans and other WDN readers have noted that getting in touch with them about orders has helped move things along quicker with re-orders made over the phone and original sale prices honored. 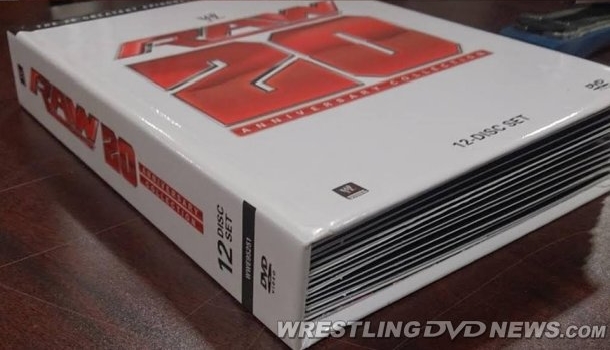 Speaking of WWEShop, if you’re looking for a good deal there before Christmas use code “WINTER” to get 20% of all orders $40+. That also includes free shipping!
— Use the code on DVDs/Blu-rays at WWEShop.com.

A 2002 FYE store exclusive in the United States, also available in Australia, but never made it to Europe originally. Despite the WWE logo on the cover, the content on the DVD readily referred to WWF which was the reason for the “deletion”. Due to time of release, in addition to being a store exclusive, this DVD can be quite difficult to find.

Released after the name change to “WWE”, this DVD was available only on Shopzone and for a limited time, so if you did not order it from there then you did not get it. It also made it to Canada for some time under the KOCH label. For the UK/European market it was a widely produced DVD that was never removed from the catalog.

Did you know the first ever ?WWF? DVD released was WrestleMania 15, back in 1999? Maybe some WDN readers own it and have been collecting the DVDs ever since! The event was re-released on the Anthology set several years ago and more recently as part of a WM 1-15 collection. Both of those, however, had edits made to them.