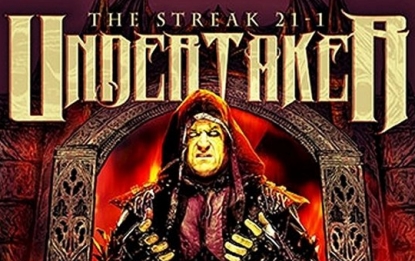 The trailer for “Undertaker: The Streak 21-1 (R.I.P Edition)” has just surfaced!

Watch it below, ahead of the WWE DVD’s release to fans across the United States on November 17th, fans in the United Kingdom on November 23rd, and fans in Australia on December 2nd.

The new 5 disc DVD set is slated to run approximately 10 hours and 40 minutes in total, featuring every match of The Undertaker’s fabled streak, extending on the original 2012 “Undertaker: The Streak” DVD release with Taker’s WrestleMania 29 match against CM Punk, and of course the WrestleMania 30 match against Brock Lesnar where the streak was laid to rest.

Promotional material promises that the earlier matches will now be “blur-free” and “unedited”.

And of course, perhaps best of all for the collectors amongst us, the DVD will come packaged in a limited edition, coffin-shaped box set! Also to be included inside is an Undertaker trading card.