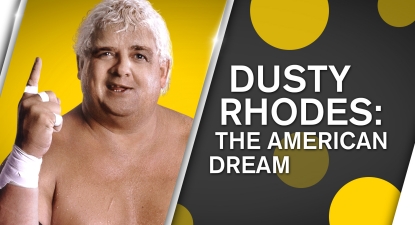 If you’re asking “Who’s Next?” to get a WWE Network Collection then here’s your answer!

Two new Collections on Goldberg and the late, great “American Dream” Dusty Rhodes are scheduled to go live on the Network tomorrow, Monday June 6th. WrestlingDVDNetwork.com has got a hold of early trailers for both of them – you can watch them exclusively below.

Dusty’s new Collection is set to include more than 20 pieces of content including matches and moments in the AWA, WWWF, Championship Wrestling from Florida and more from the ’70s and the ’80s. Joining that will be WWE career highlights and more recent NXT material with a look at his time as Commissioner and the emotional tributes following the Dream’s passing.

WWENetworkNews.com has the scoop on the entire content listing for it – go take a peek.

Far from just a ‘Common Man’, Dusty Rhodes will always be remembered for his larger than life exuberance and one of a kind innovation. The working man’s champion was a master on the mic, and a three time World Champion.

Now, celebrate the life and legacy of ‘The Father Of NXT’, ‘The American Dream’, and WWE Hall of Famer, the one and only Dusty Rhodes.

Goldberg’s Collection is set to include around 20 different career highlights from both World Championship Wrestling (notably including content from WCW Thunder) and his time with WWE. There will also be excerpts of his interview from “The Rise and Fall of WCW” DVD.

WWENetworkNews.com has the scoop on the entire content listing for it – go take a peek.

Exploding onto the scene in 1997, Goldberg launched one of the most impressive rookie campaigns in sports entertainment history. From an unstoppable force in WCW, to a highly anticipated WWE debut in 2003, the two-time World Champion stood toe-to-toe with some of the biggest names of all time. And, you can relive it all in this exclusive WWE Network Collection.

After The Spear and Goldberg’s signature Jackhammer, there was only one thing left to ask… Who’s Next?

As you can see from our WWE Network Schedule, the new Collections will be joining what looks to be a busy week of new content next week – including “NXT TakeOver: The End”, the entire second season of Swerved, a new episode of Unfiltered with Renee Young, and more!

And in case you missed it, a 20 minute preview of the Eric Bischoff DVD was just uploaded.

Watch all of that new content and the upcoming Money in the Bank PPV on the WWE Network. Your first month is absolutely FREE! Click here to subscribe to the WWE Network.