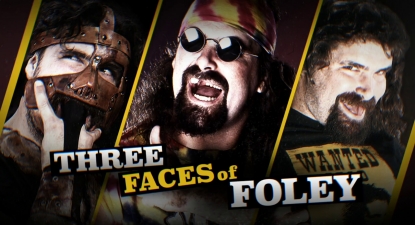 Who says you can’t “Have A Nice Day” on a Monday?

We’re hearing that a new WWE Network Collection on Mick Foley is scheduled to go live on the streaming service tomorrow morning, Monday, August 1st, 2016 — and along with that will be a separate new Collection; this one Intercontinental Championship-themed.

In a WrestlingDVDNetwork.com exclusive, watch early trailers for both of them below!

The RAW General Manager’s new Collection is slated to include more than 20 pieces of content including some early ECW and WCW Cactus Jack matches and moments, classic Foley bouts which span his entire WWE career (one of which was removed from the Network but is set to return here – namely, the Halftime Heat match), and a Legends of Wrestling roundtable snippet.

WWENetworkNews.com has revealed the entire content listing planned for it – go take a peek.

From the insane antics of the deranged Mankind, to the fun loving hipster Dude Love, to the sadistic enigma Cactus Jack. Mick Foley has entertained the WWE Universe with his unpredictability and one-of-a-kind showmanship. Now, relive The Three Faces of Foley like never before in this memorable collection.

Also hitting the WWE Network is a new Collection featuring 12 Intercontinental Championship matches – a “Best of” with a twist, as ahead of the 2016 PPV event all of the bouts picked will be from SummerSlam, showcasing the title’s impact on the summer spectacular. Just a handful of the legends involved: Bret Hart, Owen Hart, Stone Cold, Chris Jericho, and Rey Mysterio.

WWENetworkNews.com has revealed the entire content listing planned for it – go take a peek.

From the beginning, SummerSlam has highlighted some of the most exciting and unforgettable battles for the Intercontinental Championship.

From Bret Hart and Davey Boy Smith colliding in the main event at Wembley Stadium, to Triple H and The Rock climbing the ladder for gold on the Highway to Hell, this collection features The Hottest Event of the Summer’s best Intercontinental Championship Matches.

As you can see over on our WWE Network Schedule, the Collections will be joining other new content on the Network next week, including another SmackDown Live pre-show, the return of “Legends with JBL” for a two-parter with Booker T, the Cruiserweight Classic, and more.

And in case you missed it, 2006 RAW episodes have been completed and 2007 is underway!