Welcome back to Tick-C’s Treasures, where every fortnight I showcase some of the crown jewels I have found throughout the years collecting WWE DVDs!

Who doesn’t love wrestling toys? When I was a child, any toy with my favourite wrestler on it was the greatest thing in the whole world. With WWE’s colourful gear and comic book muscles, it was only a matter of time before WWE made the transition into the world of action figures. I can even make the argument that WWE action figures helped nourish my fascination with WWE. It’s been a good while since I played with action figures though. Not because I am 28 years old, but because my disposable income is being spent elsewhere (like on WWE DVDs, ha).

LJN started things off for them in the mid ’80s, presenting caricature figures for a time when many wrestlers sported cartoon-ish gimmicks. These figures were made of solid rubber and were very accurate in appearance to their real life counterparts; however they did not have any articulation. Hasbro continued that trend in the early ’90s, but enhanced the creation. The toys were manufactured from plastic and although not fully articulated, had various spring-loaded action features such as punches and clotheslines.

Jakks Pacific had an exclusive deal with WWE going into the new millennium. They upped the ante on realism, creating very lifelike versions of the superstars. More recently, Mattel has taken over and done a lot of what Jakks did, but adding their own flair as well, with lines which feature 26 points of articulation and packaged with accessories such as masks, armbands, t-shirts and in this case… with WWE DVDs!

After some research, I found out that there were only 4 DVD FlexForce figures out there to find, sold originally through Toys “R” Us stores.

The DVDs themselves have a runtime of 19-23 minutes each. They highlight each wrestlers’ careers with behind the scenes interviews on how they became WWE Superstars, with quick a look at their signature moves and their journey into the spotlight. Translation: mostly clips from their respective DVDs released in the past (e.g. Rey Mysterio Biggest Little Man), segments hosted by Josh Matthews and some interviews with Todd Grisham.

If anyone reading this wants in on the action, you can still grab these figures but there isn’t too many around. Your best bet would be to look on eBay.com or Amazon.com where they currently look to be available to pick up at reasonable prices. 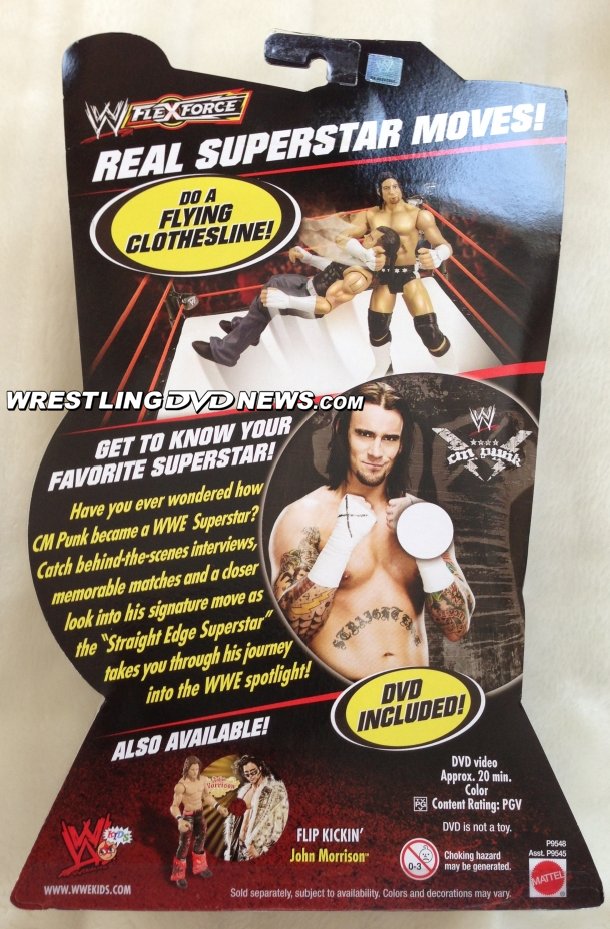