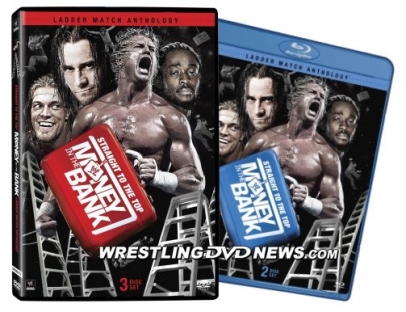 Straight to the Top: Money in the Bank Anthology will have a total runtime of approximately 6 hours and 30 minutes on the DVD version.

Breaking it down, disc one will have just short of 2 hours worth of content, disc two just over 2 hours, and disc three 2 hours and 27 minutes. We’re awaiting Blu-ray specifics.

The DVD or Blu-ray can be pre-ordered for October 29th by clicking here. The DVD contains every MITB ladder match to date, while the Blu-ray also features cash-in segments on top. 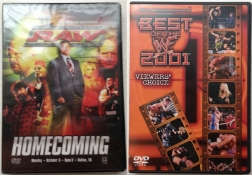 Earlier today on eBay a factory sealed Raw Homecoming DVD sold for $249! You can see that here. Also, a copy of the “Best of WWF 2001 Viewers’ Choice” DVD finished up at $270 here with the reserve price not met. In North America these two Region 1 WWE DVD releases are often considered amongst the rarest to find. 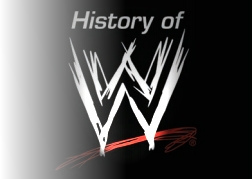 A little more official info has come out about the “History of WWE: 50 Years of Sports Entertainment” DVD release which is on the way for November. It is noteworthy that a documentary feature has not yet been mentioned in two synopses.

Chronicles the most meaningful moments in the exciting evolution of the WWE. Loaded with all-new interviews with Superstars and the McMahon family. Relive the launch of WrestleMania, RAW, Saturday Nights Main Event, and more!

Best PPV Matches 2013 will be the last WWE DVD and Blu-ray release of the year, coming December 31st. The official synopsis can be read below. The set has been listed at this link which means all scheduled releases of 2013 can now be pre-ordered.

Take home the highlights of all the top matches that happened this year during WWE Pay-Per-View Events. Which Superstars rose to the challenge and had the most talked about Main Event bouts this year? Catch all your favorite WWE Superstars and Divas including John Cena, CM Punk, Randy Orton, Sheamus, AJ Lee, The Bella Twins and many more! 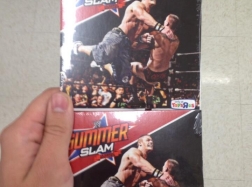 WDN readers Jason McGinnis and Dan Mader got in touch to let us know that although the Toys ‘R Us promotion has now ended, they still managed to get hold of the “SummerSlam Classic Matches” DVD exclusive by simply asking in store – and for free!

If that doesn’t work for you there are multiple copies currently listed here on eBay. 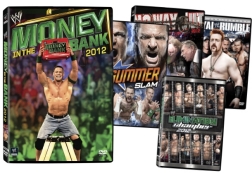 All 2012 WWE PPV DVDs are down to $5.99 each on Amazon, as the Night of Champions and Hell in a Cell 2012 DVDs have now been dropped in price in line with the others. WrestleMania is the one exception which has not gone down to $5.99 since it’s a three disc set.

Thanks to Stevie Breech for passing that along; find the deals here on Amazon.com. 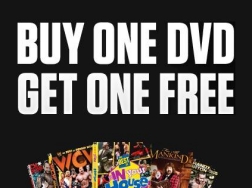 Here’s a list of the WWE DVDs and Blu-rays that you, the WDN readers, purchased in WWEShop.com‘s recent Buy One Get One Free sale.