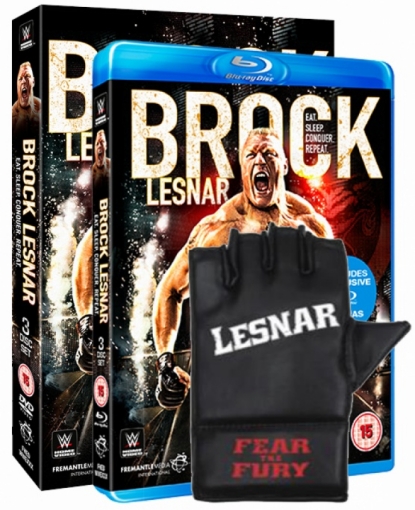 WDN has now received a few more updates on it. First up, for those wondering if there will be a UK release, there unfortunately will not be because the box set is exclusive to the United States.

However, WWEDVD.co.uk has new packages for pre-order that include the Lesnar fight glove.

One reason for there being no UK offering is speculated to be because part of its contents, the ring canvas, was recently released in the “WrestleMania 32 – Ultimate Collector’s Edition” box set.

The full Collector’s Edition “Brock Lesnar – Eat. Sleep. Conquer. Repeat.” box set will bundle all of the content listed below and can be purchased for $59.99 here on Amazon.com. The artcard in there, initially thought to be signed by Brock Lesnar, is in fact only a print and not a real signature, however the same artcard features a piece of the ring canvas used at WrestleMania 32.

A new shot of the confirmed box art for the Blu-ray Steelbook version follows below: 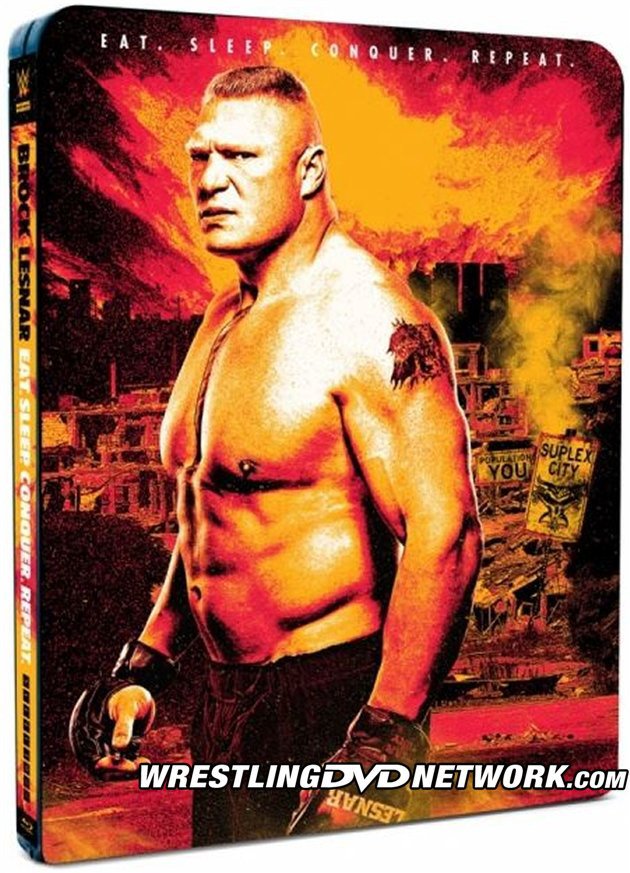 – Australia: TBA. Look for your chance to pre-order it very soon at Madman.com.au.

We’ve got our hands on the new, limited edition box sets that just hit Australia…

Check out some first look photos of the big box sets below, the largest of which contains a whopping 11 DISCS! As you can see, each one packs in past WWE DVDs of a particular theme.

Fans in AU/NZ – head to Madman.com.au to see more details and add them to your collection. 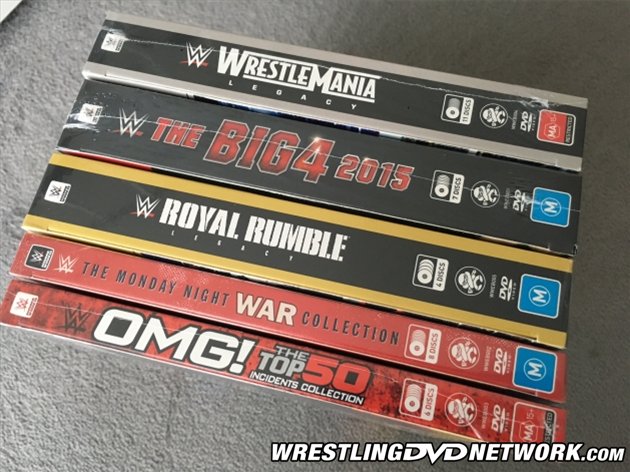 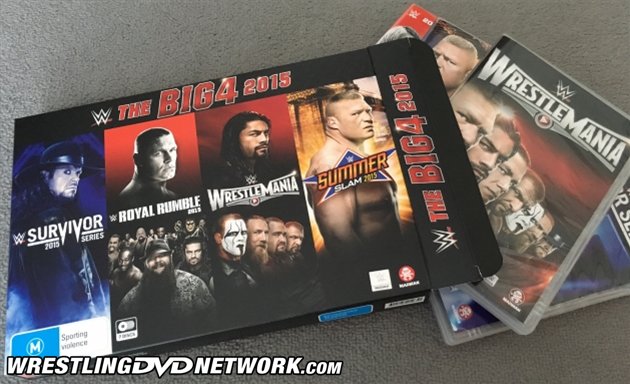 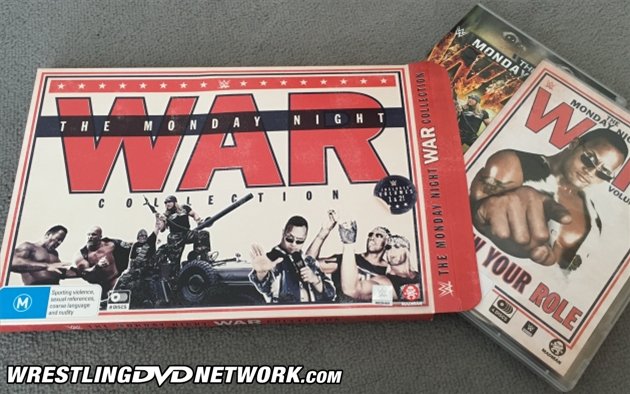 Stay locked to WrestlingDVDNetwork.com — we’re planning on GIVING AWAY some of these to our loyal readers! 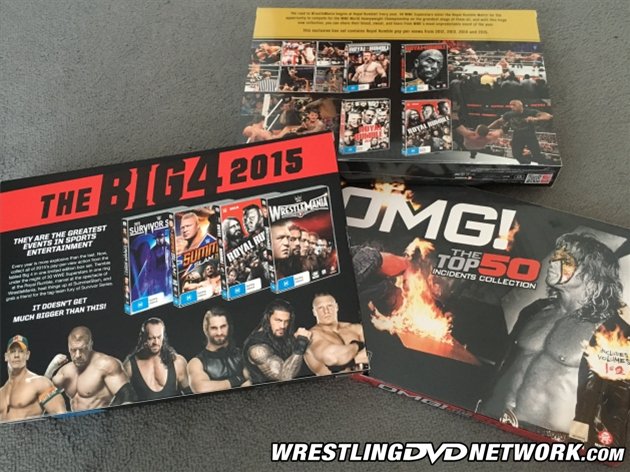 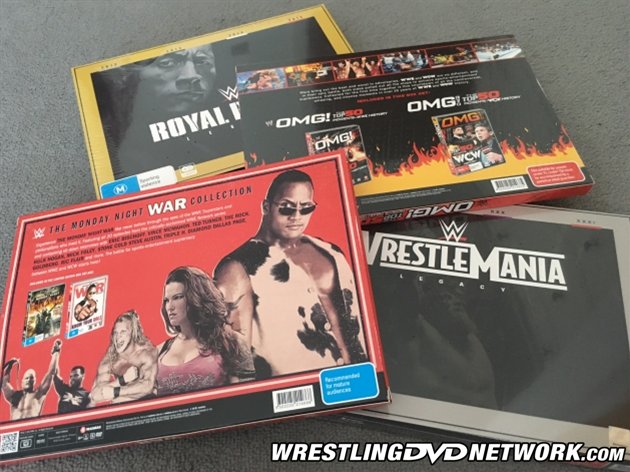 “Attitude Era Vol. 3 – Unreleased” has just been listed here on WWEShop.com and their listing for the Blu-ray edition confirms that the mini-book is also coming with that version too.

This is not expected to be a WWEShop exclusive – all first run copies of both DVD and Blu-ray in the United States should contain the book. You’ll be able to tell by looking at the cover artwork.

The third Attitude Era DVD/Blu-ray officially hits the UK on Monday and the USA on Tuesday. 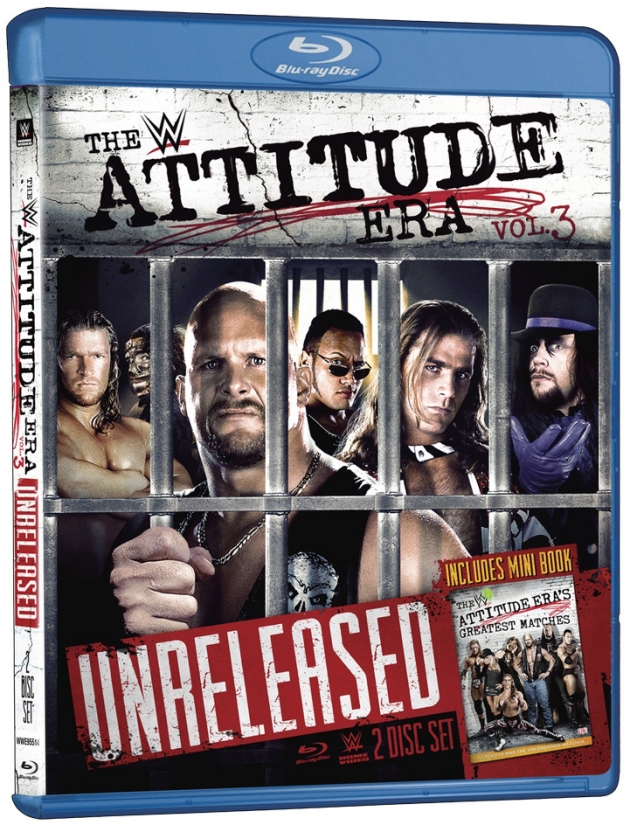 EBAY WATCH: A handful of WWE DVD goodies to look out for in eBay auctions today.

They include the new Eric Bischoff DVD for a fraction of the price you can find it in stores, a decent deal on the recent Owen Hart DVD, and several WWF DVD rarities such as WrestleMania 18! 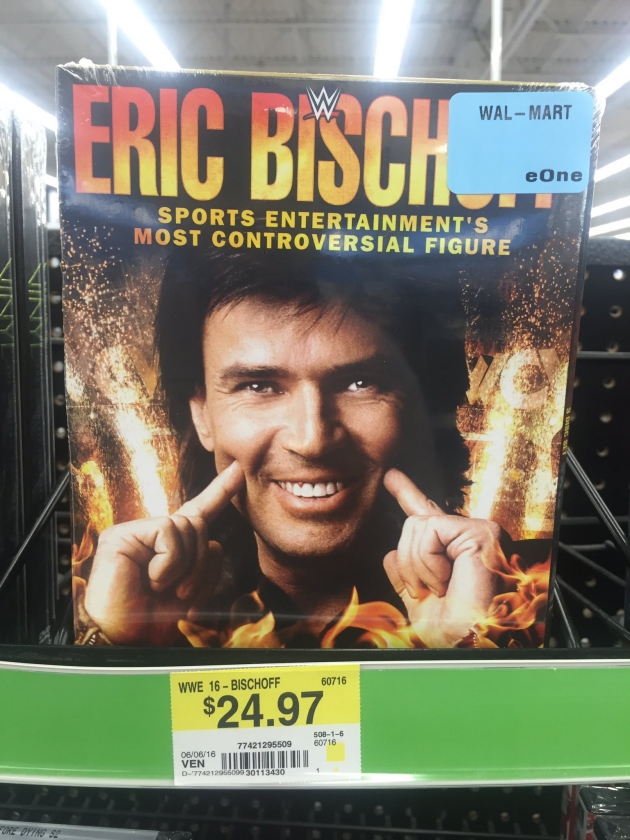