We can now reveal the first details of The Great American Bash DVD which we learned was added to the schedule a few weeks ago.

The set will be titled: United We Slam: The Best of Great American Bash. Additionally the synopsis reveals that not only will it recap the Jim Crockett Promotions and WCW Great American Bash Events, but also the 2004 – 2009 WWE PPV events too!

This 3 disc DVD and 2 disc Blu-Ray set will be released on July 15, 2014 in the United States, below is the official synopsis:

“One of sports entertainment’s most patriotic traditions, The Great American Bash provided the July fireworks for fans from 1985 – 2009. Originating with the NWA and WCW, the event has featured legends such as the “Nature Boy” Ric Flair, The Road Warriors, Sting, Randy Savage and more clashing for championship gold. Continuing in WWE, the red, white and blue pay-per-view always delivered historic thrills. Now, relive the best star-spangled excitement from nearly 20 events, featuring the greatest matches and moments from history’s top Superstars.”

United We Slam: The Best of Great American Bash will be available to pre-order soon.

However, we are awaiting the final confirmation. It has been the case historically that the WrestleMania DVD/Blu-Ray artwork is updated after the event has taken place. We hope to have more information on this in the coming week.

Speaking of WrestleMania, did you know that it airs this weekend on PPV and for the first time ever the WWE Network, are you excited? 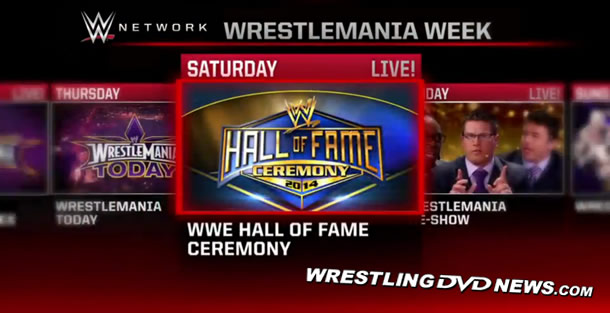 In case you may have forgotten, the 1989 movie No Holds Barred was released on Blu-Ray this week. Unlike the DVD version which was released a couple of years ago, this one features two bonus matches:

This will be the first time that the steel cage match has ever been released on DVD/Blu-ray. Order your copy of No Holds Barred on Blu-ray now from Amazon.com.

Finally, stay tuned to the site later this week for details of our 4th Anniversary Giveaway Spectacular…