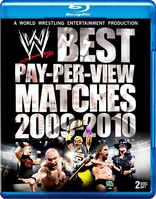 Artwork and some additional information for the upcoming “WWE – Best Pay-Per-View Matches 2009-2010” Blu Ray has been released.

“The pinnacle for every sports entertainer is to appear on pay-per-view, and once there, they desire to steal the show-put on the best match. For the first time ever on home video, the WWE Universe can enjoy the best PPV matches in a one-year span in one home video collection. The stars of Raw, SmackDown, and ECW present the greatest bouts of the year, from longtime PPV standards WrestleMania, SummerSlam, Survivor Series, and Royal Rumble, as well as newly themed events, including Breaking Point, Hell in a Cell, Bragging Rights, TLC, and Elimination Chamber” (Blu-ray.com).

The Blu Ray release is rumoured to be a Best Buy Exclusive on sale July 20, 2010 and will be a 2 Disc Set.  According to PWInsider.com this title will include over 8 hours of footage.

A high quality image of the newly released Blu Ray cover is shown below: