This 3-Disc DVD and 2-Disc Blu-ray is released in the United States on October 30th [order yours] and also in October for fans in the UK and Europe (when pre-ordering at Silvervision.co.uk). Australian fans can order a copy at WWEDVD.com.au.

The night after WrestleMania XXVIII, Brock Lesnar made a shocking return to the ring and leveled John Cena with an F-5, sending a message that after eight years, the pain is back! In 2002 and 2003, The Next Big Thing brought it to the biggest and baddest competition in WWE, becoming the youngest WWE Champion of all time and a household name virtually overnight. His awe-inspiring physique, amateur championship pedigree and affinity for punishing opponents made him an unstoppable force in the ring. Now, after years of dominating the MMA scene, Brock is back and looking to steamroll the biggest Superstars of today.

This rerelease of the 2003 DVD, Here Comes the Pain, includes the original documentary that chronicles Brock’s meteoric rise to fame, as well as six hours of additional matches not included on the original DVD! Plus, hear Brock’s controversial comments upon his return to sport entertainment! . Fans can experience classic matches against Hulk Hogan, Undertaker, Rey Mysterio, Randy Orton and many more!

Hell in a Cell Match for the WWE Championship
Undertaker vs. Brock Lesnar
No Mercy 20th October, 2002 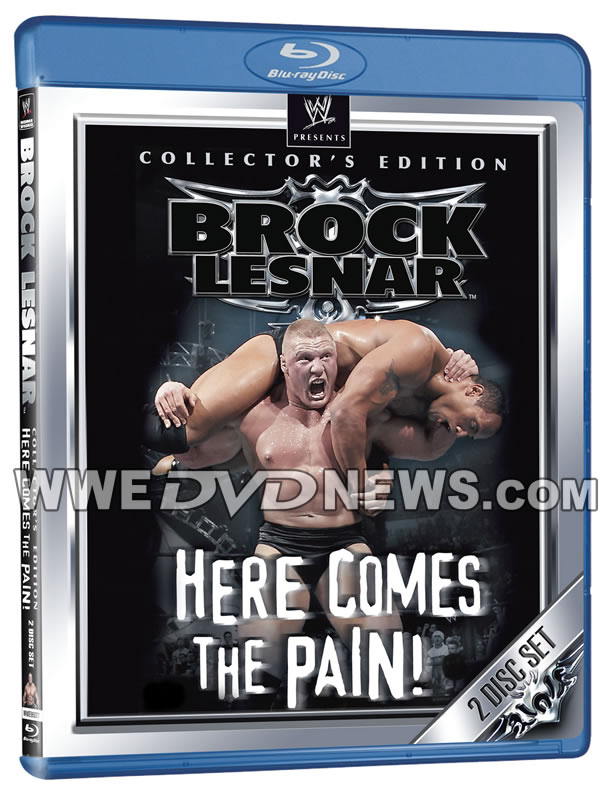 – US fans can order the Lesnar DVD for October 30th release by clicking here
– Fans in the UK and Europe can pre-order a copy at SilverVision.co.uk
– Not forgetting Australia – order for November release at WWEDVD.com.au

What are your thoughts on Brock Lesnar’s Collectors Edition DVD & Blu-ray content? Are there any matches or moments you would have included which aren’t? As always leave your thoughts in the comments section below!

90 Comments left on this article...