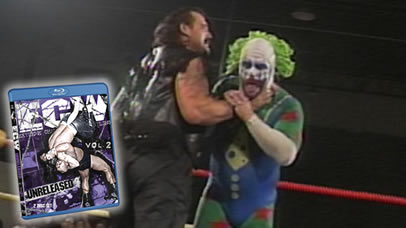 This Tuesday, the second Volume of ECW Unreleased hits stores across the US, in advance of this I am here today to look at the Blu-ray exclusive matches from the set.

I won’t be looking at the matches from the main feature, however you can of course read Joe Israel’s excellent review of those matches right here.

In total the Blu-ray extras consist of 6 matches and runs for approximately 1 hour and 39 minutes.

The first match comes from the infamous NWA World Heavyweight Championship Tournament. The match features 911 and the wild card entry – Doink The Clown (Matt Bourne). The tournament not only featured ECW talents but those from around the world, including: 2 Cold Scorpio, Chris Benoit, Dean Malenko, Osamu Nishimura, The Tazmaniac and the eventual winner Shane Douglas. 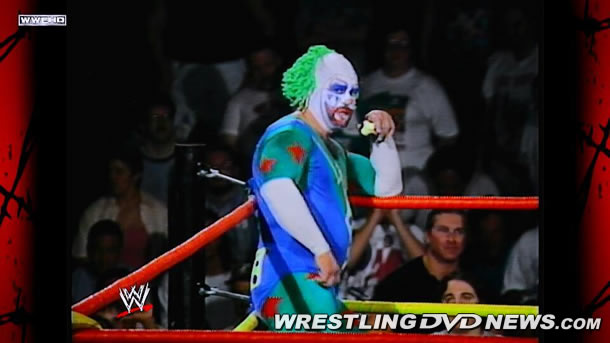 The match itself was nothing more than a quick angle; as the contest is very one sided in the favour of 911, only lasting a few seconds. The main purpose of the match, in my opinion was to point out the differences between ECW and WWE. Paul Heyman himself proclaims following the match; in a moment which has become a staple of all ECW video packages: “This ain’t no circus… this is E.C.W.!”. 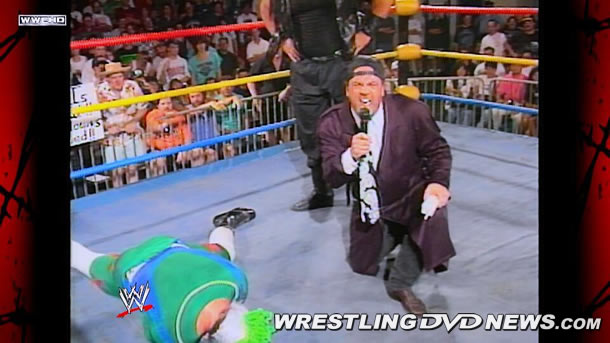 Unfortunately Bourne’s tenure in ECW was short lived, as soon after beginning his “Bourne Again” character he departed the promotion.

This six-man steel cage match was originally slated to feature The Sandman joining forces with The Gangstas (New Jack and Mustafa) however as Mustafa had apparently gotten himself into some “legal issues”, therefore Sandman’s semi-regular tag team partner 2 Cold Scorpio joined the team. Their opposition for the match combines Mikey Whipwreck with The Public Enemy. Mikey, who had been training around this time with The Public Enemy dons a similar attire to Grunge and Rock, he also demonstrates his newly learned “hoodie” skills by stealing the watch and wallet of ring announcer Bob Artese. 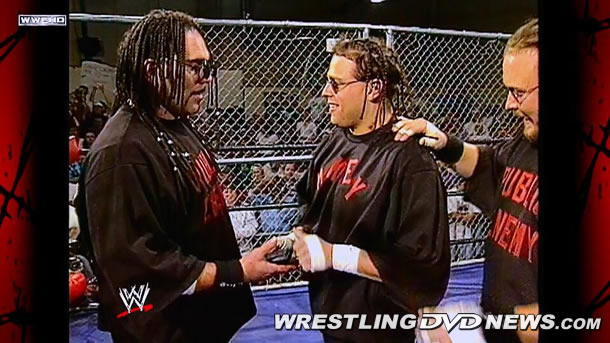 This match is a typical brawl; as you would have expected with many of these competitors. The cage is unable to hold all of the action as New Jack and Johnny Grunge brawl around the arena. There are a few cool spots, however the main purpose of the match was to establish Mikey Whipwreck as a truly credible challenger for The Sandman’s ECW Championship on the next Arena show.

Overall the match was a decent brawl; if you were expecting a technical masterpiece you were always going to be disappointed. 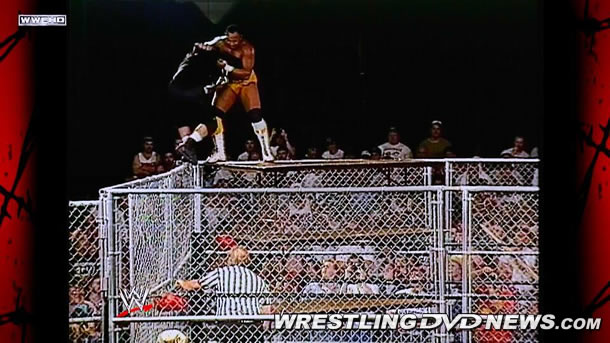 Four Way Dance for the ECW World Heavyweight Championship: Terry Funk vs. Raven vs. Stevie Richards vs. The Sandman (The Buffalo Invasion, 5/17/97) [15:55]

Just over a month after winning the ECW Championship at their first PPV: Barley Legal. Terry Funk takes on all of his opponents from that night in a four-way dance (fatal 4-way elimination match). The match is also historic as Stevie Richards suffers a sever neck injury in the conclusion of the match when Terry Funk drops a length of guard rail onto the back of his head and neck. 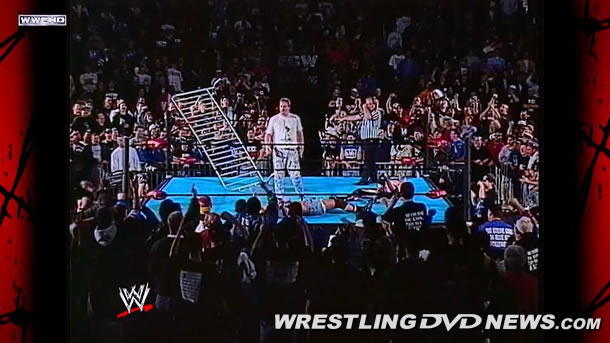 The match itself does fall a little short. Raven and Stevie have some good exchanges, baring in mind their history, however the early elimination of Raven and the final two eliminations coming so close together do hurt the match a little in my opinion.

This isn’t really a “match” per se, the showdown takes place after The Public Enemy left WCW and just before they began their brief WWE run. 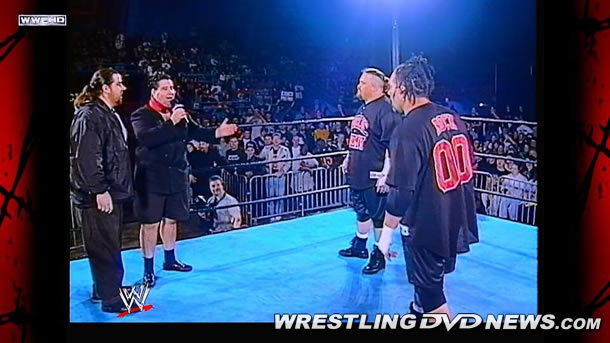 The segment begins with Joel Gurtner and Sign Guy Dudley trash talking with Rock and Grunge, before Bubba D-Von and Big Dick come out to beat down The Public Enemy. After they are beaten down and the Dudley’s leave, Rock and Grunge call them back to continue the beat down. Even New Jack tries to make the save, but is also beaten down by the Dudley trio and carried to the back. After several comebacks eventually The Public Enemy and Dudley’s brawl out of the arena.

This segment appears complete here, however back in 1999 only clips were used on the Hardcore TV show which made the The Dudley’s look as strong as possible as the final image we saw on TV was Public Enemy left laying. The back story to this at the time was that a mysterious benefactor had paid The Dudley’s to take out both The Public Enemy and New Jack. 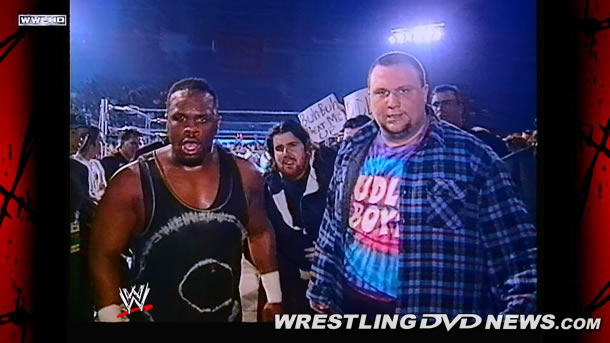 This match comes from the 1999 edition of Hardcore Heaven; a show remembered for the awesome Rob Van Dam vs. Jerry Lynn match. Tommy Dreamer was locked into a bitter feud during this time with The Impact Players: Justin Credible and Lance Storm. This match again isn’t a scientific match, but rather another hardcore encounter.

The match is fine, it is more of your typical weapon filled hardcore match. I feel a straight up wrestling match would have been better placed at this point on the Blu-ray. 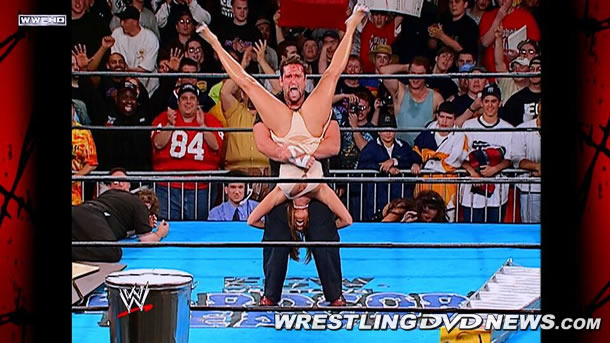 The final match of the Blu-ray exclusives comes from Hardcore TV. This particular match was filmed in Ft. Launderdale, FL and features Yoshihiro Tajiri taking on his most famed ECW rival: Super Crazy.

Tajiri joined ECW in late 1998 and shortly after began his feud with Super Crazy. These two always had great matches together whether they were: high-flying encounters, mat classics or like we have here a hardcore melee. This match is a Japanese Death Match; a rematch to their Mexican Death Match that took place on TNN a few weeks prior. 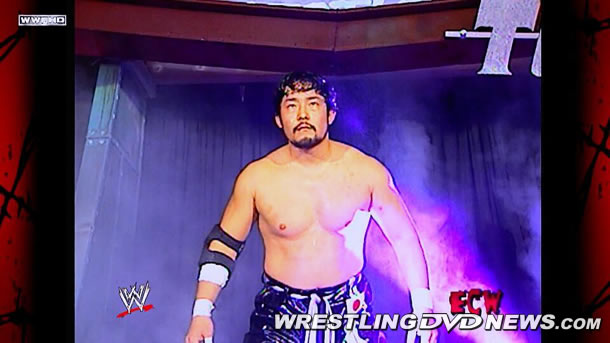 This match is really good, but honestly you can’t go far wrong with any Crazy/Tajiri match-up. From the outset this match is a bloody brawl, we don’t see a range of weapons used here like in other hardcore matches, however we do see a liberal use of tables and chairs (many, many chairs). The use of furniture does allow for a few great spots including: a leg drop from the top rope to the floor and the very innovative finish involving a table, a pile of chairs and a top rope double foot stomp, another cool yet disgusting spot is the “war paint of blood” moment. 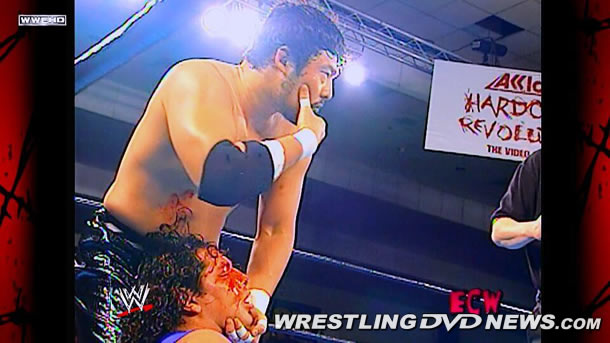 Overall the Blu-ray extras for ECW Unreleased Vol. 2 are very entertaining, most of the matches are at least decent, and I don’t believe anyone would be bored watching them.

The only real criticism I could make of the match choices here, is that they are all of the hardcore persuasion. While it was this style of wrestling that ECW was well known for, it wasn’t the only style the promotion utlized; as is illustrated with the match selection of the main feature.

Don’t forget you can pick up ECW Unreleased Vol. 2 on DVD or Blu-ray this Tuesday.