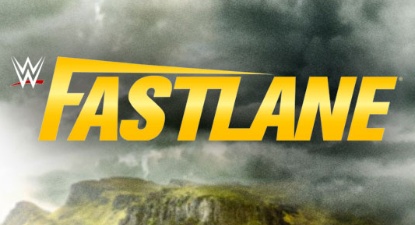 WWE will be releasing Fastlane on Home Video to the United States on May 4th, to be followed up less than a week later with the release to fans in the UK on May 10th.

Drew McIntyre will be gracing the front cover in a slightly modified version of the PPV’s promotional poster, a recent trend we’ve observed of WWE carrying over the event poster to the DVD artwork for “creative continuity”. Roman Reigns, Daniel Bryan and The Fiend will appear on the spine, while the back cover will feature multiple photos of the in-ring action from the evening. 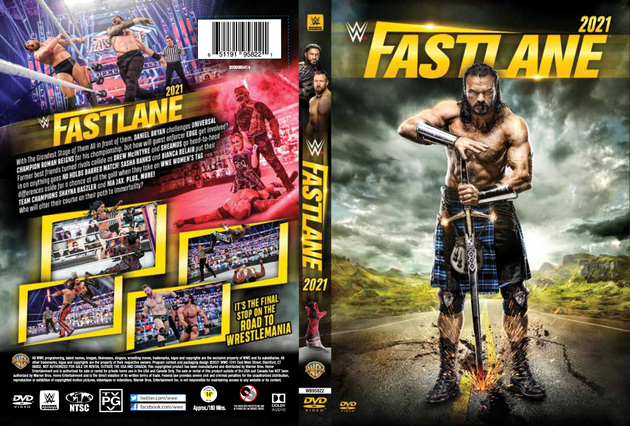 With The Grandest Stage of Them All in front of them, Daniel Bryan challenges Universal Champion Roman Reigns for his championship, but how will guest enforcer Edge get involved?

Former best friends turned rivals collide as Drew McIntyre and Sheamus go head-to-head in an anything goes No Holds Barred Match! Sasha Banks and Bianca Belair put their differences aside for a chance at all the gold when they take on WWE Women’s Tag Team Champions Shayna Baszler and Nia Jax. Plus, more!

Who will alter their course on their path to immortality? It’s the final stop on the road to WrestleMania! 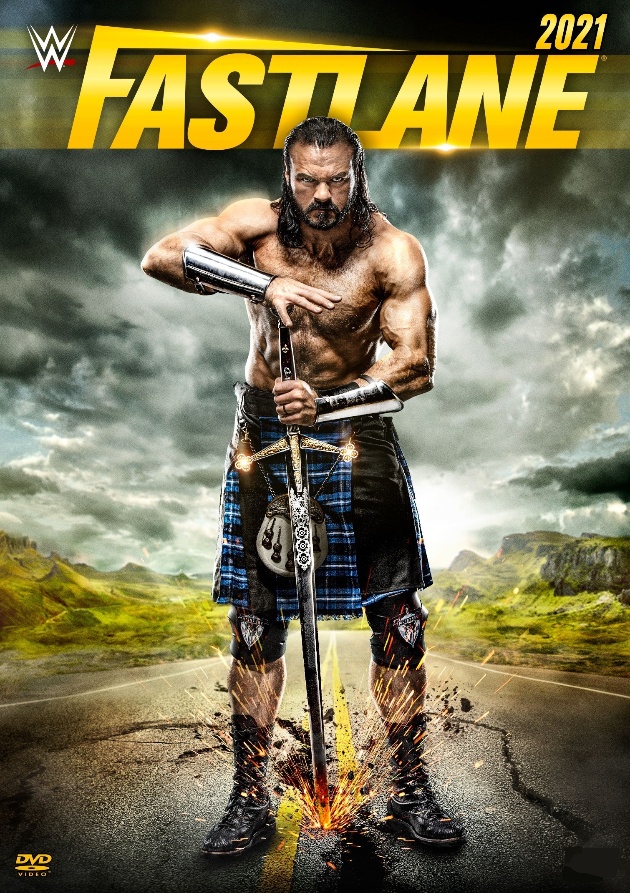 The Fastlane to WrestleMania

You Know I Can Perform

Smells Good Being the Champion

The match from the Kickoff Show will be included as the sole special feature: 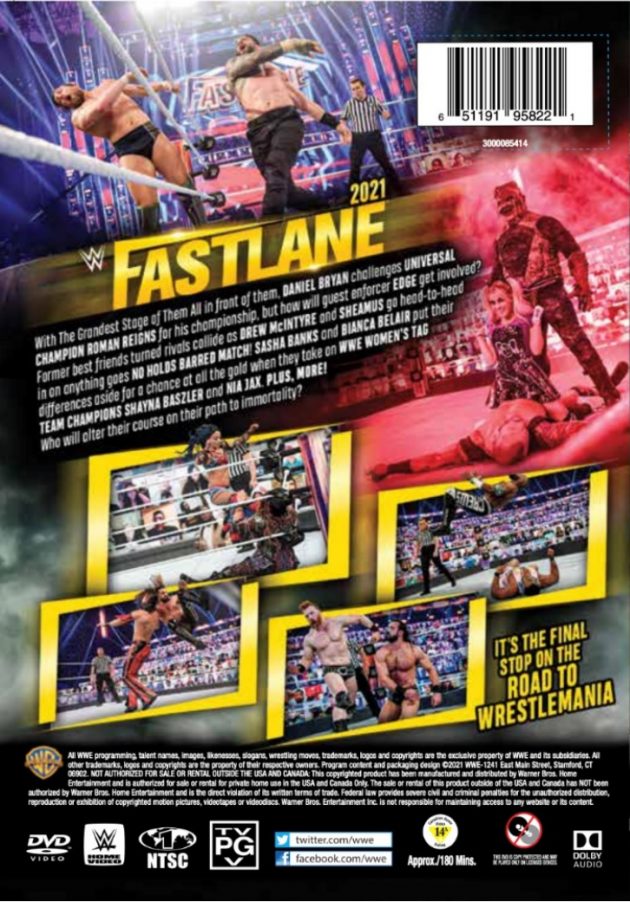 Earlier this month we exclusively revealed that WrestleMania 14, 16, 20, 22 & 24 will all be returning to DVD in the UK as individual releases, right before WrestleMania 37!

Since then, the DVDs were confirmed by Fremantle and now is your chance to get hold of them!

All five titles have been listed for pre-order here on Amazon.co.uk and here on WWEDVD.co.uk.

The following press release has been sent out:

CLASSIC WRESTLEMANIAS – BACK ON DVD

RETRO ACTION FROM THE GREATEST SPECTACLE & SUPERSTARS IN SPORTS-ENTERTAINMENT 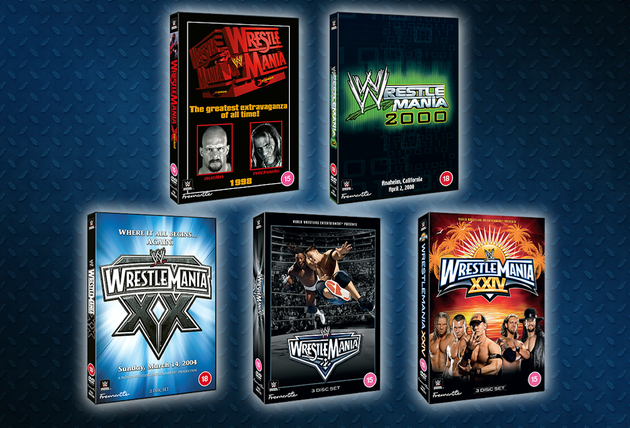 The Attitude Era begins! Stone Cold Steve Austin challenges Shawn Michaels for the WWE Championship, with special enforcer Mike Tyson at ringside – but whose side is “The Baddest Man of Planet” on? Also on the show, The Undertaker and Kane face off – the first ever clash between the “Brothers of Destruction” – and The Rock defends the Intercontinental Championship. Plus, wild action from Triple H, Cactus Jack, the New Age Outlaws, and Sable! Released as part of its own DVD set for the very first time.

The Rock faces three other Superstars in a star-studded Fatal 4-Way Match for the WWE Championship – with a member of the McMahon family in every corner!

The Hardy Boyz, Edge & Christian, and the Dudley Boyz take the tag team division to new heights in a Triangle Ladder Match – a groundbreaking collision that set the stage for their historic TLC matches. There’s more incredible Attitude Era action from Kane, Rikishi, DX, and Chyna – plus, a crazy Hardcore Battle Royal!

WWE marks the 20th anniversary of WrestleMania by returning to where it all began – Madison Square Garden! Eddie Guerrerro defends the WWE Championship against Kurt Angle in a classic matchup, and The Rock returns to reunite the Rock ‘n’ Sock Connection and battle the Evolution trio of Batista, Randy Orton, and Ric Flair. There’s also a Brock Lesnar vs. Goldberg dream match – with Stone Cold Steve Austin as the special guest referee!

John Cena puts the WWE Championship on the line against Triple H, while Rey Mysterio sets out to fulfill a lifelong dream of becoming World Heavyweight Champion – but he has to go through both Kurt Angle and Randy Orton in a Triple Threat Match! There’s also high-risk action in a Money in the Bank Ladder Match, a Harcore battle between Edge and Mick Foley, and an Undertaker vs. Mark Henry Casket Match! The 3-disc set includes exclusive extras and the 2006 Hall of Fame Ceremony.

Edge and the Undertaker battle in the main event and it’s all on the line – Edge’s World Heavyweight Championship and the Deadman’s WrestleMania undefeated streak!

In one of the all-time great WrestleMania celebrity moments, Floyd Mayweather steps into the WWE ring for a GIANT challenge. Also, Ric Flair says an emotional goodbye to the WWE Universe when he battles Shawn Michaels – plus, John Cena, Triple H, and Randy Orton clash in a Triple Threat Match for the WWE Championship! The 3-disc set includes the 2008 Hall of Fame Ceremony.

Don’t miss the classic WrestleMania DVDs – own a piece of WWE history!

Back cover artwork has now been finalized for each title too – shown below!

You may notice any reference to Chris Benoit in the text descriptions and/or imagery has been removed from the original artwork where he appeared before (for example, a new photo of Randy Orton appears in place of Benoit on the WrestleMania 20 artwork).

This is similar to the company’s approach seen in the past on the WWE Network streaming service, whereby Chris Benoit isn’t mentioned nor highlighted, but is shown in the actual footage. 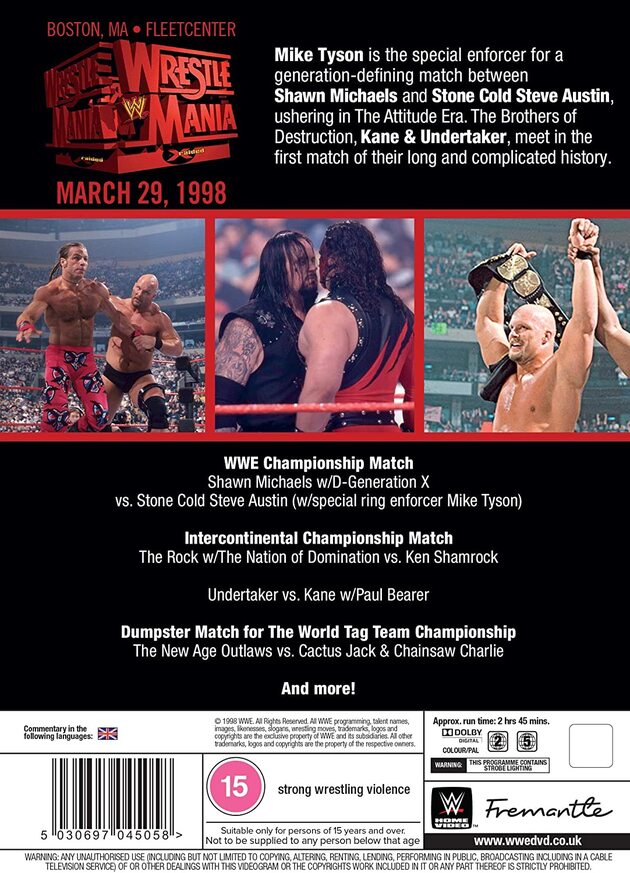 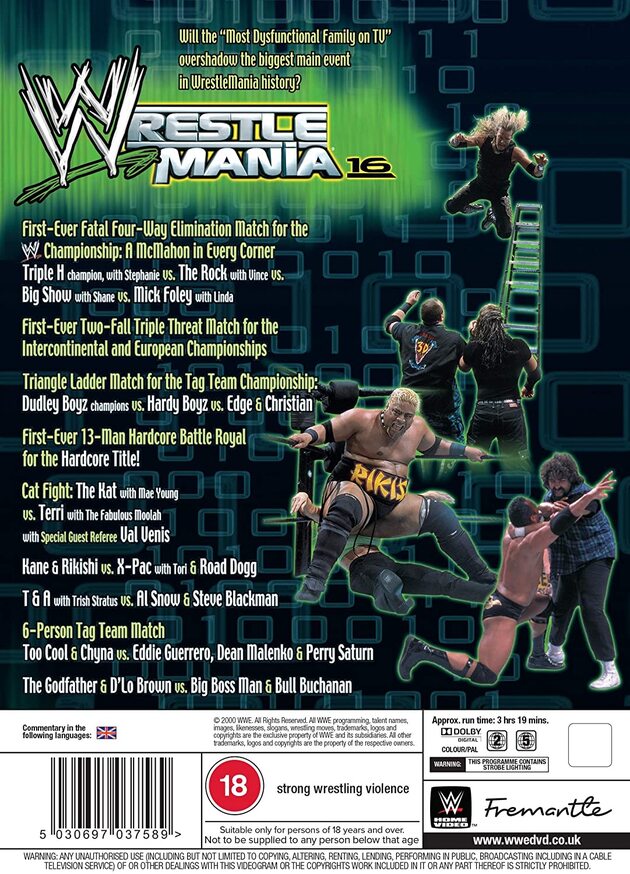 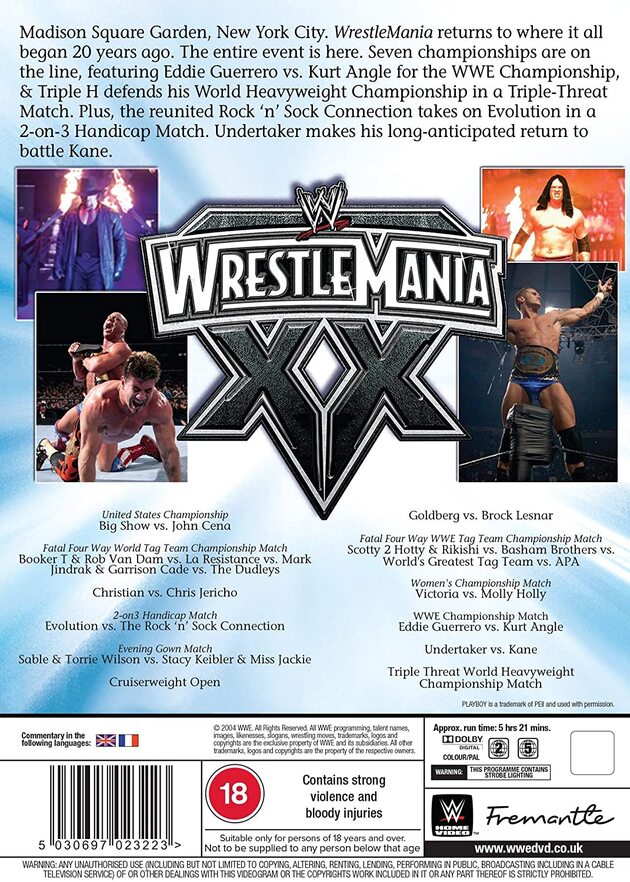 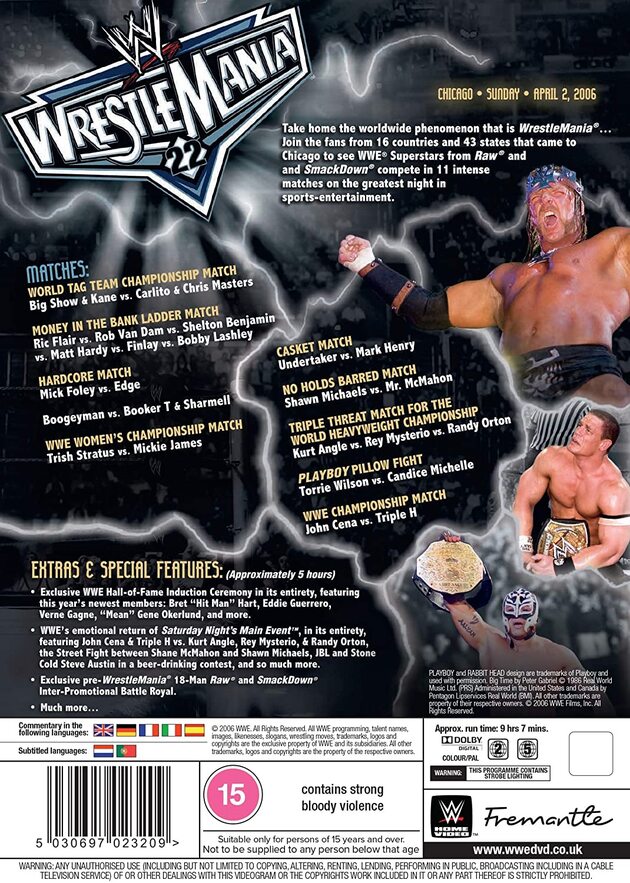 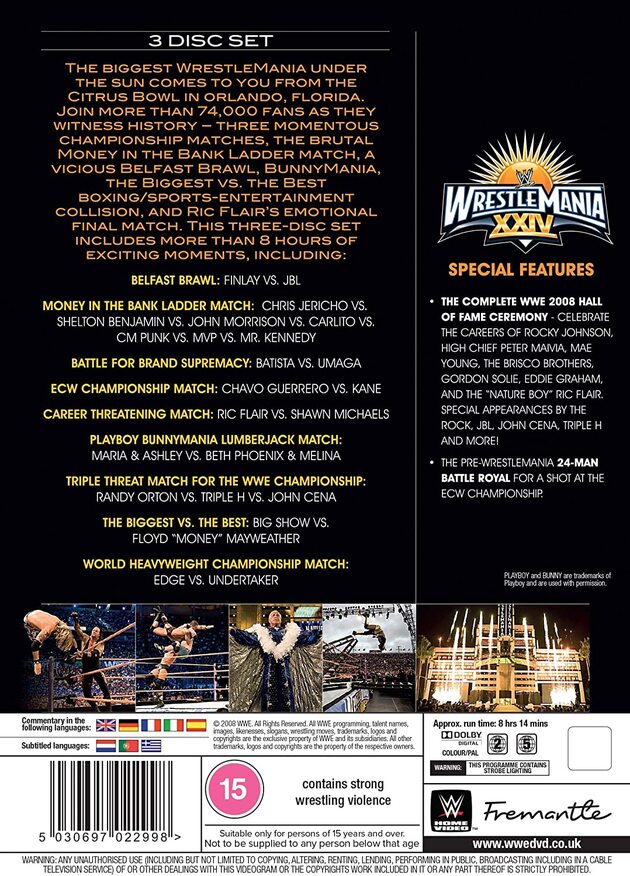 Enter the giveaway by joining our free email subscription before that date. Just enter your email in the box below or by doing the same at Bit.ly/WDNEmails.

Increase your chances of winning by also entering on Twitter:

Give us a FOLLOW and RETWEET this for another chance to WIN these classic #WrestleMania DVDs (the unedited UK prints by @WWEHomeVideoUK!)

Heads up — Elimination Chamber 2021 will arrive on DVD in the United States this Tuesday!

WDN reader Wyatt Thomason got his hands on a copy early and shared the photo below. The Topps trading card found inside is expected to feature Shayna Baszler. 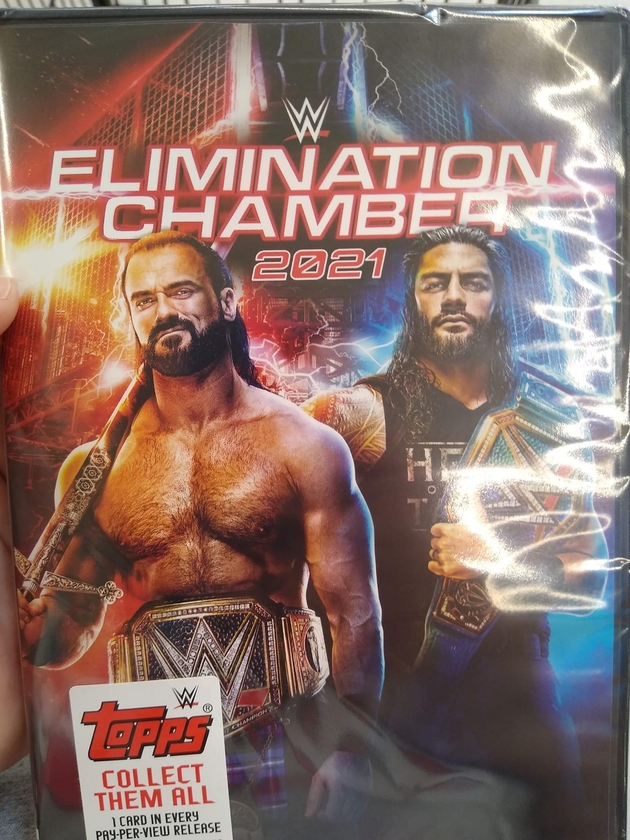 Get your copy of the WWE ELIMINATION CHAMBER 2021 DVD…

– Australia: May 19th. Your pre-order opportunity is now live at Madman.com.au.