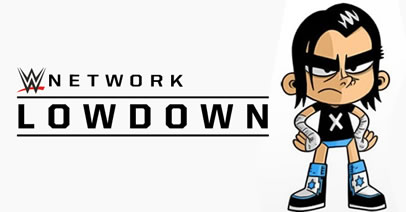 There was some big news regarding the WWE Network this past week as we learned that the current subscriber base clocked in at 1,300,000.

Of course, the announcement of the subscriber base comes on the heels of that ‘rassleMania show from last week, did you hear about it? If not, you really should check it out because it was a pretty solid show – we’ve heard some saying it was the greatest one ever!

This week not only did the Network begin adding the fifth (2011) series of Tough Enough, but also they also added compete second season of the show to the video on demand section. The second series features a bunch of future WWE Superstars and Divas as potential contestants, so keep your eyes peeled for them all in the casting episode.

It was also cool to see WWE drive viewers to go to the Network this week to hear from the Stinger following his WrestleMania match against Triple H. Sadly, it looks like Sting might just be done with WWE which is a real shame for those of us who really wanted to see that final match versus The Undertaker. Hopefully, somehow, some way..

With the rumoured issues between WWE and Steve Austin, WWE has drafted in the Ayatollah of Rock and Rolla, Chris Jericho for the WWE Network’s next live “podcast”. Jericho’s guest for the podcast will be the current reigning United States Champion, John Cena.

The live podcast will air immediately following RAW on Monday night. For my money Steve Austin puts on a much better podcast than Chris Jericho and something tells me that Jericho will toe the company line much more than the Rattlesnake would.

The next Beyond the Ring to be featured on the Network will be Hulk Hogan’s 2006 DVD offering – “The Ultimate Anthology”. This Beyond the Ring will air on Friday afternoon and will be available as VOD shortly afterwards.

Also announced alongside the current subscriber number was a slate of new programming. So I thought we would take a look at the new shows and give my two cents on each of them (based off the details we have right now)…

Chris Jericho… ugh. Personally I’m over Chris Jericho, he’s really not funny and isn’t much of a podcast host. Every topic he discusses has to come back to him, and frankly, JR should have a podcast on the Network as that would be awesome (make it happen WWE!).

Hosted by legendary talk show host Jerry Springer, this series will re-introduce the WWE Universe to the most outrageous stunts and cringe-inducing moments in TV history. The series will be chock full of insane situations and racy romps from WWE’s past that will have members of the WWE Universe asking, “Did they really do this?!” Springer will inject his own brand of humor into each episode with themes such as “Love Hurts,” “All in the Family” and “Weddings and Funerals.” The half-hour series will be available beginning in April in WWE Network’s video-on-demand library with new episodes weekly.

Who doesn’t love Attitude Era content – especially when it is dressed up like this, but Jerry Springer as host? I guess Springer was a hot commodity when the Attitude Era was running wild and that’s the connection? I’m sure this one could be fun, granted it’s likely not going to set the world on fire, but as 30 minutes of “popcorn” TV, it could be fine.

Unfiltered with Renee Young (May 2015)

WWE announcer Renee Young interviews WWE Superstars and other pop-culture celebrities, covering just about everything, except what they are famous for. In this short-form series, Renee’s guests include Grammy Award winner Wiz Khalifa, five-time Grammy nominee Skylar Grey and WWE Superstars Roman Reigns and Seth Rollins. Unfiltered will debut in May.

Renee is awesome, and I’m sure a show with Renee will be awesome too. I’m not crazy about Renee interviewing Wiz Khalifa, but still it’s Renee. 😉

WWE Network will look back at this epic David vs. Goliath encounter at WrestleMania 24 (2008) and its shocking conclusion coming just in time for Mayweather vs. Pacquiao, which is expected to be one of the biggest boxing matches in history.

Uh…. didn’t we have this already, I believe it was called “WrestleMania Rewind”. I suspect this show will be VERY similar to that and likely one to be skipped; just like the Arnie and Triple H interview… has ANYONE seen that?

WWE teams up with the Director of Jackass and Bad Grandpa, Jeff Tremaine, to give you the hilarious original series, Swerved. Swerved is a half hour series and will premiere in May.

The idea of a wrestling themed show called “swerved” and not having Vince Russo involved made me chuckle a little bit. Honestly, we don’t know enough about what this show is to really give any kind of analysis. I suspect it would be WWE Superstars and Divas performing “Jackass” style stunts on each other and fans, but that’s all I’ve got. Regardless, it’s apparently coming our way next month, so we don’t have too long to wait.

WWE commentator Corey Graves reveals a variety of unique venues, customs, music, food and people as WWE’s tour travels around the world. From Marvel comic headquarters to a tattoo shop on the lower east side of Manhattan, Graves examines the local culture with his unique perspective and style. This short-form series will premiere in June.

WWE spans the globe in search of the most beautiful, athletic and charismatic women to find the next stunning WWE Diva. This competition will give viewers the opportunity to witness the challenges, trials, drama and rewards that accompany the journey of these women, as they vie for superstardom. Coming this Fall.

#GiveDivasAChance… remember that? On the face of it (and knowing the history of the Diva Search), this show seems to completely spit in the face of all the hard work which female superstars have done both with Total Divas as well as in the ring at NXT to develop their characters and in ring personas. It’s possible that it could be a “female Tough Enough” which would be nice to see where the emphasis will be on the ladies training. However, something tells me that we might just see them eating whipped cream from Kamala’s stomach.

WWE, in partnership with Seth Green’s Stoopid Buddy Stoodios, will debut a new, animated short-form comedy series entitled Camp WWE. Imagine WWE Superstars and Divas when they were kids at their favorite summer camp…which happens to be run by none other than Mr. McMahon – add in shock-value, slapstick humor and social satire – and you have WWE’s first adult comedy, which will debut later this year.

South Park meets WWE. If we wanted to watch South Park, wouldn’t we just do that? I’m really not feeling this particular show. No doubt, we’ll watch it and see what it’s all about. Something which does intrigue me about the show is its rating – TV-MA – will WWE really have the characters of their superstars push the envelope? We’re going to have to just wait and see.

WWE The List is the best, the worst, the most bizarre and interesting of everything and anything WWE. If it’s amazing, outrageous, sexy or just plain fun, it just made #TheList.

I love wrestle crap, and this one looks to be a show all about wrestle crap. Granted, it sounds very similar to Countdown, but still it could be a fun show.

The acclaimed 30-minute docu-series takes you on a lightning-fast journey through a day in the life of WWE’s most intriguing Superstars and groundbreaking events.

WWE documentaries… you can’t go too wrong with a WWE doc and going off the two specials we’ve had already, WWE 24 is awesome. I hope however we get into some kind of schedule – even one episode each month would be nice.

WWE Countdown settles the great debates across WWE history. Who was the most dangerous Diva? Who had the best catchphrase? This one-hour series allows the WWE Universe to determine the top 10 in each category and have the final word on who tops each list.

I guess Countdown is the most popular series on the WWE Network, after all it is the only show which will have THREE series’. I’m not entirely sure how much stuff is left to “Countdown” but all in all Countdown is a decent watch most times. Nice to see it return.

This docu-style series takes a look at the greatest rivalries in WWE history, as never told before. Get the real stories behind WWE’s most exciting matches and entertaining feuds through the eyes of the Superstars who created them. Each one-hour episode leaves no story untold.

WWE Rivalries was decent series and sadly it ended its run early, so it’s nice to see that it will be returning. Hopefully this series can give a little focus on some more non-WWE rivalries, like: Von Erich’s vs. Freebirds, Raven vs. Tommy Dreamer and Sting vs. Hulk Hogan/nWo.

Harkening back to 1985, this Saturday morning cartoon, which originally aired on CBS, features Hulk Hogan, Andre the Giant, Junkyard Dog, Captain Lou Albano, and Roddy Piper in a series that is both nostalgic and entertaining, 30 years later.

We were told Rock ‘n’ Wrestling was coming to the Network for quite a while, so it will be cool to see it finally added. I’m not sure that it will really drive subscriptions (in a positive way) but it’ll be nice to check out a few episodes of the classic cartoon here and there.

We suspect this will be the Foley comedy show which WWE recorded all the way back in November 2013 at Smithtown, Long Island. This has been one of the shows which I personally have been awaiting since February 24, 2014 so I’m super pumped that this one is FINALLY coming – because who doesn’t love the Micker?

While the new season of Tough Enough will air on the USA Network this June (and it appears that Stone Cold Steve Austin likely won’t be returning as the host, due to his current rift with WWE) it’s possible that Tough Enough could be re-aired on the Network, or maybe we will have some kind of Network-exclusive post show.

Not to sound like an episode of WWE Countdown, but what do you think of the list? Join the conversation (in the comments below) and let us know which sound best and other kinds of original shows you would like to see on the WWE Network…