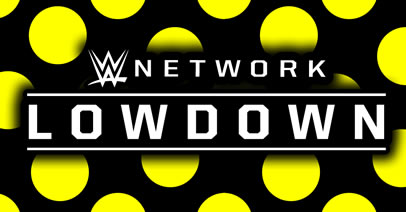 Hard times were subjected to wrestling this week with the very sad news of the passing of Dusty Rhodes. So, to honor “The Dream”, today in WWE Network Lowdown, as well as looking at the recent and upcoming content on the Network, we will also take a look at a small collection of Dusty Rhodes content available to view right now on the Network.

Money in the Bank

Tonight, live, the WWE Network will air the sixth annual Money in the Bank PPV event. The proceedings will begin tonight at 7pm EST with the Kickoff show, followed by the event itself.

The PPV will of course feature the Money in the Bank Ladder Match, along with the rematch between Kevin Owens and John Cena, while Seth Rollins attempts to regain his championship belt when he takes on Dean Ambrose in a ladder match. Also on the line will be the Tag Team Championships, Divas Championship and the Intercontinental Championship.

Who do you think will win tonight's Money in the Bank Ladder Match?

Renee Young will return to our screens on Tuesday with another edition of WWE Unfiltered. This week Renee will shun the movie and television stars in favor of a WWE Superstar, Darren Young, in what promises to be a revealing interview. Unfiltered will drop on Tuesday at 4pm.

Ahead of the new season of Tough Enough next week, the WWE Network added the entire third season of the show to its video on demand section, along with the 1 hour DVD version of the fourth ‘season’ too.

So, now that the Network has caught up on all the Tough Enough action, we’re ready for the brand new season (which begins on the USA Network next Tuesday).

To kick off the season, on Tuesday at 8pm EST the WWE Network will air a special featuring the final selection process. This one hour show will see highlights of the three day try-out where the contestants were filtered down from 40 to the final 13.

This past week “The WWE List” kicked off with a look at the “Trendiest Divas” and as we speculated in last week’s edition of WWE Network Lowdown the show actually turned out to be very similar to WWE Countdown (without really counting anything down).

The 30-minute show also has a similar format to Countdown with talking heads discussing the topic in question, the only real difference was that we have cryptic clues about the upcoming topics on the show by way of the on-screen graphics.

This wasn’t a great show, however maybe this week’s edition, which will look at Shocking Title Changes will be a little better? This week, The WWE List will air on Tuesday at 4:30pm EST (after Unfiltered).

Here is a full rundown of the new content available since we last checked in with a Lowdown, all added to the WWE Network over the past seven days:

We learned on this past week’s edition of NXT that this coming week would see Samoa Joe take on the NXT Champion, Kevin Owens, in a non-title match. Also scheduled for this coming week’s episode is a six-person mixed tag team match where Enzo, Big Cass & Carmella will attempt to avenge their recent loss to the Tag Champions (Blake & Murphy) and Alexa Bliss. Catch these two matches and more on Wednesday night at 8pm EST.

As part of ‘Throwback Thursday’ on the WWE Network this week, the second episode of Hulk Hogan’s Rock ‘n’ Wrestling will air, which is titled: “Four-Legged Pickpocket” — yes folks, this is your piece of must see Network programming this week, be sure to catch it 11:30am EST. 😉

The sad news of this week was the passing of “The American Dream” Dusty Rhodes, I’m sure everyone would agree that the wrestling world has lost a true icon, trendsetter, and incredible mind. In honor of the American Dream’s life and times the WWE Network will air a special one hour documentary: “Celebrating The Dream” on Monday night, following RAW. The documentary sounds like it will be very similar to the Ultimate Legend documentary for the Warrior from last year and WWE has been working hard on the piece over the weekend, by interviewing a number of personalities, including Ric Flair.

Dusty will be remembered for so, so many reasons: his incredible promos, his in-ring exploits and of course his contributions outside the ring, along with his work with the next generation of superstars (his ‘kids’) in NXT. With all this in mind, let’s take a look at a collection of Dusty content which you can remember the man by, already available to view on the WWE Network.

How do you talk about Dusty matches and not bring up Ric Flair? And what better match than this Starrcade ’85 classic? These two began their careers as good friends, but the true magic was with the two as bitter rivals in their incredible NWA/JCP run. Here, Dusty ‘regained’ the NWA Championship and it all happened at the Dream’s own baby – Starrcade – the father of the modern-day wrestling supercard.

Dusty Rhodes vs. Kevin Sullivan (Clash of the Champions III; 9/7/88)

At the moment we sadly don’t have any Championship Wrestling from Florida on the WWE Network, as Florida was the birthplace of the American Dream. However, we do have this match between two Florida wrestling legends and again taking place on another Dusty brainchild – Clash of the Champions. Also keep an eye out for Garry Hart as well, who was also involved with Dusty first adopting the American Dream moniker.

In 1989 the Dream headed north to the World Wrestling Federation, where he famously donned the polka dots. Here in his sole WrestleMania match, he teamed up with “Sweet” Sapphire to take on the team of the Macho King and Queen Sherri — sadly, everyone in the match has now passed away. That is becoming a very common thing looking back on some of these old wrestling cards now.

Now this isn’t a Dusty Rhodes match, however War Games WAS a Dusty match, and what better way to look at this Dusty innovation than with quite possibly the very best War Games match?

When you think Dusty Rhodes rivalries, Ric Flair might be at the top of the list, but the Funker is right near the top of the list as well. Here in this match the “egg sucking dog” Dusty Rhodes teams with his son, Dustin, to take on the team of Bunkhouse Buck and the incomparable Terry Funk. The Funk/Rhodes feud dates all the way back to the 70s, but these two would remain ‘kayfabe’ rivals until the very end.

Another Dusty innovation here – The Great American Bash – and in this match the legendary Dusty takes on the legend killer Randy Orton, in another Dusty staple – the bull rope match.

Our final match and it’s a very emotional one; it sees the Rhodes boys (Goldust and Cody) team up to take on The Shield and get back their jobs in WWE. The match was a simply incredible one and with the Dream himself in the corner of his boys and the crowd solidly into the match, this match is a true example of why we all love wrestling. The Dream even got to crack open a bionic elbow and while this would be Dusty’s on-screen swansong, it couldn’t have been much better as all three Rhodes stole the show.

On behalf of everyone here at WrestlingDVDNews.com we would like to express our deepest condolences to the family and friends of Dusty Rhodes in this very difficult time. To Dusty, THANK YOU. Thank you for everything you have done for the wrestling b’ness and thank you for the memories.

Until next time, we really hope that you enjoy tonight’s Money in the Bank PPV and the rest of the week’s WWE Network content.