FINALLLY…. THE LOWDOWN HAS COME BACK TO WrestlingDVDNews.com…. did you miss us? After a one week absence, today we are back with a bumper edition of WWE Network Lowdown. In this edition we’re going to be covering all the goings-on of the past couple of weeks and taking a look forward to the coming week of WWE Network-ness.

A second first look at The Destruction of The Shield

When it came to the breakup of The Shield, the question which we had was “Why Seth, why?” but after this week and WWE adding a “First Look” at Destruction of The Shield DVD/Blu-ray on the Network the question has changed to “Why WWE, why?”

Those of you in the know will be aware that this week WWE released an extended version of the WWE Network original documentary “Destruction of The Shield” on DVD/Blu-ray with a bunch of matches. Of course, the original documentary feature is still available on the Network, so it was logical to assume that if WWE added a first look (like they have done with Sting, Macho Man etc.) they wouldn’t include ANY of the documentary portion as it is already available on the Network. How wrong could we be? 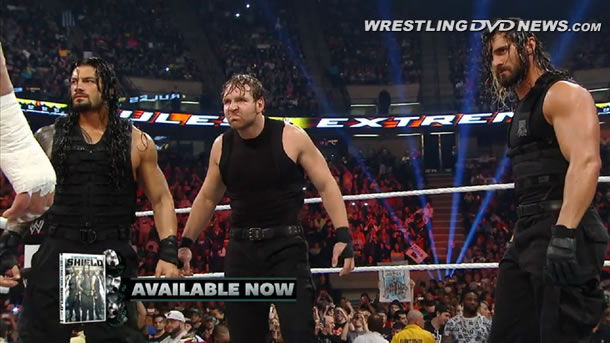 In addition to featuring segments of the documentary, it also featured a bunch of the extended scenes from the DVD/Blu-ray documentary. Problem being, how does this make everyone want to go out and buy the DVD, as now we would guess approximately 90% of the extended feature is available on the Network across the original feature and this “First Look”, so surely the way to go was to make a 30 minute feature from the bonus materials of the DVD, no?

Anywho, if you still want to pick up the DVD/Blu-ray (there’s still lots of bonus matches and interviews on top of the documentary) you can pick it up right here from just $19.99.

Valentine’s week saw the WWE Network’s attempt at Valentine’s Day themed programming in the form of the “WWE Crazy Stupid Love Show”. As you could probably guess, the short 23 minute feature was all about on-screen romances between WWE Superstars and Divas over the years – a mix of flashback footage and interviews, hosted by Renee Young. I wouldn’t go out of my way to sit down and watch this one (well, I’d actually recommend pretending it never happened) but hey, there were a few funny moments to look back on.

What were those? It’s tough to pull some out now you’re putting me on the spot, but it’s cool to revisit Triple H and Stephanie’s attempted renewal of their wedding vows on RAW or Rico’s attempt to marry Billy and Chuck on SmackDown, and did you know that “98% of WWE’s TV weddings end in divorce”? But, when the best parts of the show are Renee’s dress and Tyler Breeze spinning in his chair… yeah, nobody said this one would be ground breaking. Oh, also, no more Vickie/Edge clips for a good while in these Network shows please!

Did Seth and his Ho’s get Countdown pulled?

It’s been a hard couple of weeks for The Architect. A week or so during which I’m sure his head had to be throbbing at times – we’re obviously not the type of folks who would go dicking around with penis jokes, but if we were you can bet we would have at least a couple here in this little piece. 😉

This has to be one of the oddest stories we’ve ever covered here in Lowdown. Last week, just hours after the series of events which unfolded on social media regarding Seth Rollins, WWE aired an edition of WWE Countdown looking at the most eccentric odd jobs in wrestling history (basically occupational gimmicks). Shortly after the episode aired, it was pulled from the Network… the buzz on social media was that it was down to one little comment by Seth Rollins, that comment being this…

“Well… uhhhh… one ho probably wouldn’t gonna be enough for me. I would say that it really depends on the city and the quality of ho to be honest with you, we’re gonna have to uh… it’s a case by case situation. ” — Seth Rollins

When the episode was re-uploaded later in the week, that very comment had been removed from the show. In any other week the comment would have been completely acceptable, however due to its unfortunate timing, the episode was pulled. Being the investigative journalists that we are at WDN, we managed to track down the clip – check it out in full below.

Have WWE exhausted their library of documentaries for Beyond the Ring? Recently we’ve had three match compilations added to Beyond the Ring (which was originally intended to be for the DVD documentary specials). Over the past few weeks we’ve had Hulk Hogan’s Unreleased Collectors Series, John Cena: Greatest Rivalries and this week DX: One Last Stand all added to the Network. This coming Friday the 2013 “Bret Hart: Dungeon Collection” will join them.

While the Network does have a whole bunch of the DVD documentaries, there are still several notable features still not available including: True Story of WrestleMania, Eddie Guerrero: Cheating Death, Stealing Life, The History of WWE, Ric Flair & The Four Horsemen and more. Only time will tell what new documentaries or match comps we will get in the coming weeks.

BTW WWE, a directors cut / extended edition of True Story of WrestleMania would be a great addition in the run up to WrestleMania!

Last week we saw another NXT live special added to the history books and as we suspected NXT Rival was an INCREDIBLE wrestling show. If you still haven’t seen it, or maybe you aren’t watching NXT on a regular basis, then you really should.

Rival delivered a stacked card of really great matches from the opening bout between Tyler Breeze and Hideo Itami, through to the AMAZING/MUST SEE clinic between Finn Bálor and Adrian Neville to the spectacular Women’s Championship Four-Way and of course the intense showdown between Sami Zayn and Kevin Owens. 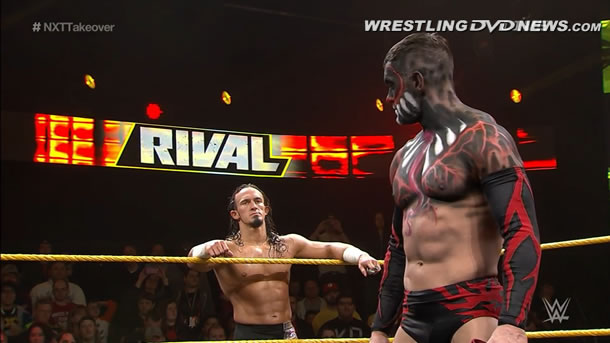 Plus this week’s edition of NXT was also really good – if you like surprising returns then you should definitely check it out and also keep tuned to NXT each and every Wednesday for more surprises in the coming weeks.

It’s a really big week for the WWE Network, as this coming week will mark the first anniversary of the service! – it’s hard to believe that we’ve had the Network for a year already.

In a recent presentation at the Needham Growth Conference, Stephanie McMahon and George Barrios revealed that the Network launched on February 24, 2014 with 1,000 hours of content and over the past year they have added an additional 1,500 hours of content. So, with this week being the first anniversary, there is sure to be a big new series debuting, live specials and brand new first run episodes galore…. right? Well actually, nope, there is absolutely nothing going on!

There are only a few new shows set to air this week, including: RAW Pre-Show, NXT and two new 1996 RAW’s – so there doesn’t even look to be a new edition of Countdown and the previously announced Booker T edition of WWE24 doesn’t look like it is set to air on Monday either…. WORST ANNIVERSARY WEEK EVER!

However, we do have the Fast Lane PPV tonight – the festivities will kick off at 7pm EST as we are speeding down the road towards WrestleMania, which is now just 35 days away! As we have seen in the past, we suspect during the PPV we’ll have some big announcements of new Network shows/specials set to air in March when the free month has ended.

Again, if you’ve not already signed up for the WWE Network you can watch Fast Lane for FREE! To get yourself signed up to the Network click here.

You may have missed out on Lowdown last week; however we are going to make sure you don’t miss out on last week’s classic match up… 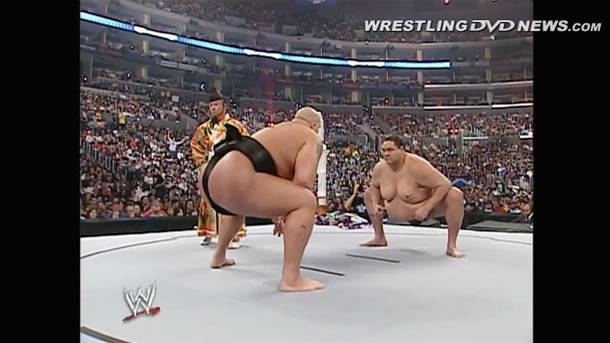 The WrestleMania 21 Sumo Match may in all likelihood be the worst WrestleMania match of all time. Not only did we have to endure two big ol’ dimpled asses, but also a whole lot of “stalling” for what wound up being 61 seconds of “action”. Tazz (bless his heart) did a really great job on commentary and tried to add legitimacy and gravitas to the match, but despite being a former sumo grand champion and an early MMA competitor Akebono just wasn’t a big enough mainstream star in the United States to pull off the “big time” vibe – something which we would get a few years later with the Floyd Mayweather Jr. match.

Okay, so we had a match that you just can’t seem to forget (no matter what you do!) so, for this week’s Classic we have a really good “forgotten” WrestleMania match. 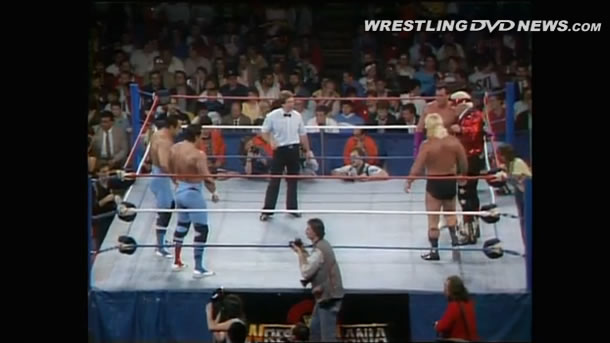 After months of build up, the Chicago portion of WrestleMania II was headlined by the Tag Team Championship as The British Bulldogs (flanked by fellow Brit Ozzy Osbourne) challenged The Dream Team following two failed attempts, this time in their final encounter. The match would feature an additional trouble shooter referee (despite not actually being mentioned on the commentary).

This match was at this point the greatest WrestleMania match, sadly however after WrestleMania III happened this match lost its crown and actually has, in my opinion, gone on to become the very best forgotten WrestleMania match of all time. If you haven’t seen it before, you should really check it out.

If you haven’t subscribed to the WWE Network before (why haven’t you?), February is your chance to get it for FREE! Sign up now at WWE.com and you’ll get to see Fast Lane tonight.

Until next time folks, enjoy the PPV…