The big news in regard to goings-on with the WWE Network recently has to be last night’s announcement that the Network will finally be launched in the United Kingdom and Ireland. Just in time for the Royal Rumble PPV, the Network will hit the UK & Ireland in two weeks on Monday, January 19, 2015. Also of note is that the service will be priced at £9.99 in the UK and €12.99 in Ireland (i.e. $15.30), which interestingly wasn’t the pricing when it was to have launched back in November (that was to have been $9.99/£6.30).

Finally, some feared that the UK version of the WWE Network would be delivered using Sky TV (similar to Rogers in Canada), however that will not be the case. The WWE Network will be delivered as in the United States as an Over the Top digital network via the Web, WWE App (on iOS & Android), Streaming Devices, Smart TVs and Games Consoles.

It’s been a little quiet over the past few weeks on the WWE Network when it came to new, original content – as you may have expected over the festive period.

Just prior to the holidays the latest edition of The Monday Night War was added. The episode, titled “Mistakes on the Battlefield”, looked at the rise of Eric Bishoff within WCW and some of the mistakes made by WCW leading to Bischoff’s eventual removal from power in the fall of 1999. One of the true highlights of the episode however was the archive footage of “Easy E’s” WWE tryout from 1990, which included him “selling” a broom! 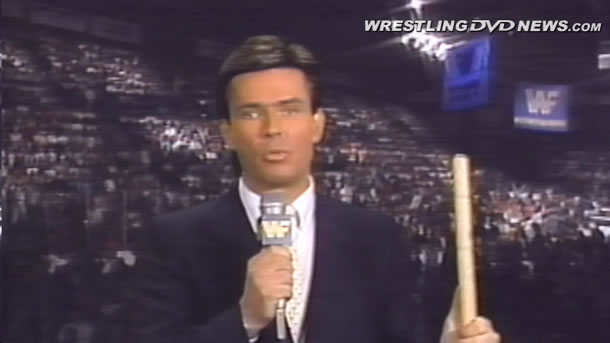 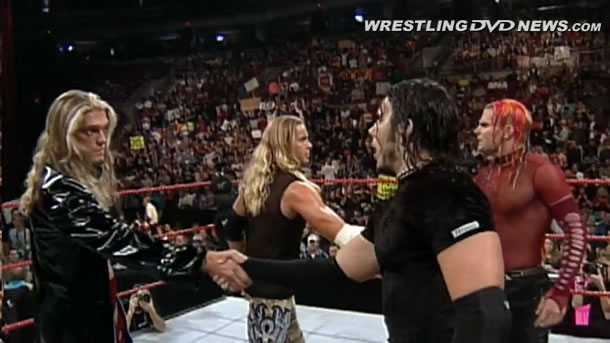 Highlight of the week

While there was a lack of new original content, we did have an attitudinal escape over the holidays, as WWE Network treated us with: The 12 Days of Attitude. — It’s nice to escape the family over the holidays and what better way than with some Attitude Era Rasslin’?

Each day over the holidays the WWE Network added one complete episode of either: RAW, SmackDown or Heat along with a handful of extras (classic clips, matches and promos). Each day there was something new to check out — personally I feel this is a much better way to add new content rather than adding up 50+ episodes all at once. Here’s a rundown of all of the complete shows which were added during the 12 Days of Attitude.

RAW 229 [10/13/97]
This RAW comes hot off the heels of the initial Hell in a Cell match and steaming down the road towards Survivor Series, with the rivalry between Shawn Michaels (with DX) and Bret Hart (with The Hart Foundation) reaching a fever pitch. Other highlights of the show are the build to the Road Warriors Tag Team Title Match and Jim Cornette (and Vince McMahon’s) take on New York Post writer Phil Mushnick. 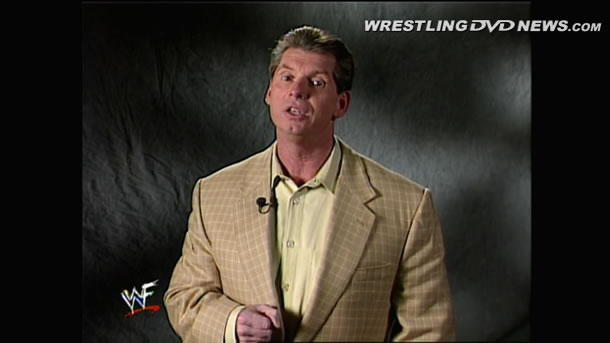 RAW 238 [12/15/97]
The debut of the scratch logo! This edition of RAW featured not only a new logo but a new ‘attitude’ as Vince McMahon delivered the famed “Cure for the Common Show” monologue. The main event of the show saw the Road Warriors take on Shawn Michaels and Triple H in what would prove to be a very memorable angle and launching point for the antagonists.

RAW 274 [8/24/98]
The Highway to Hell had its final stop on August 24, 1998 and it was headlined by a Hell in a Cell encounter between Mankind as Kane (just weeks after the iconic, much more widely known King of the Ring matchup).

RAW 284 [11/2/98]
All too often these days RAW will begin with a 15 minute promo that seems to never want to end, however back on November 2, 1998 the show began with a 15 minute promo THAT YOU DON’T WANT TO END! This particular show illustrated why we all hated Mr. McMahon so much and there’s a really cool visual at the end of the show; one which isn’t really remembered by the masses. 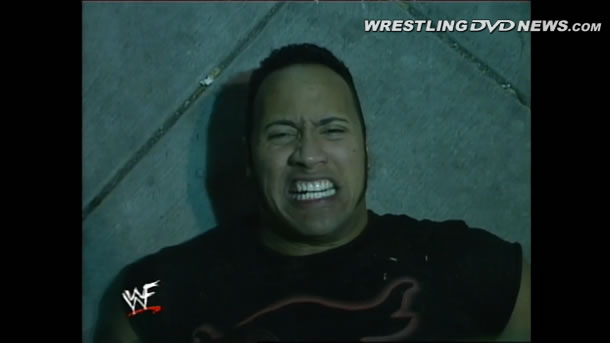 Heat 27 [1/31/99]
Halftime Heat. Nuff said? If not, this episode of Sunday Night Heat aired during SuperBowl 33, with the main event “empty arena” WWE Championship match between The Rock and Mankind timed to happen during the SuperBowl’s half time. A week after their brutal brawl at the Royal Rumble, this one while still violent had a little more comic relief. The show also features the WWE’s memorable SuperBowl commercial — get it?

SmackDown 0 [4/26/99]
While the first weekly episode of SmackDown is already available on the WWE Network, the pilot episode was not… until now. Originally broadcast in April 1999 the special episode features the formation of the Corporate Ministry, as well as the beginning of Edge’s rise after picking up the slack in a Brood in-ring promo.

RAW 315 [6/7/99]
The long anticipated reveal of “The Higher Power” was given to us during this particular episode of RAW, and of course this lead to Steve Austin becoming the WWE’s new CEO, something which we will see more of later. Another memorable angle on the show was the closing match between Undertaker, The Big Show and the ring. 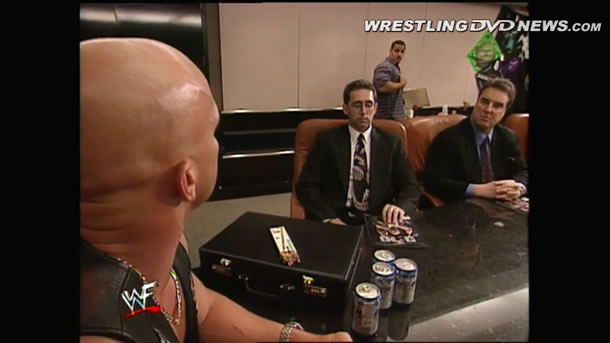 RAW 316 [6/14/99]
This was a very appropriate way to close out the 12 Days of Attitude; the three hundredth and sixteenth episode of RAW. Following up on the prior episode this show featured Steve Austin fulfilling his new CEO duties at WWE HQ in Stanford, CT – and who’da thunk that craziness and hilarity would ensue?

Heat 52 [7/25/99]
The final countdown to Fully Loaded 1999, this show might be most remembered for Triple H’s promo with JR where “The Game” was born. However, the show also featured a really hot angle leading into the PPV and the “End of an Era” First Blood Match for the WWE Championship with The Undertaker and Steve Austin. I bet once you’ve watched this show, you’ll be more than temped into checking out some of the Fully Loaded PPV! 😉 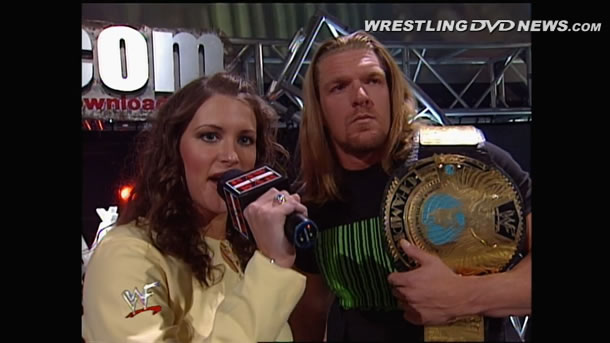 RAW 346 [1/10/00]
The McMahon-Hemsley regime ruled WWE with an iron fist, but on this night the WWE roster, unified by The Rock, had enough. The roster threatened to walk out unless the recently fired Mankind was reinstated, which began the build to the iconic Royal Rumble Street Fight. The show also features the roster choosing their own matches and DX facing off as Road Dogg battles Billy Gunn, while X-Pac takes on Triple H for the WWE Championship.

RAW 360 [4/17/00]
The momentous night in Penn State University when the Ayatollah of Rock n’ Rolla – Chris Jericho shocked the world by winning the WWE Championship…. only for it to be overturned a few minutes later. — This was fantastic storytelling from the Chris Kreski era of WWE.

SmackDown 39 [5/18/00]
On the road to Judgment Day and the Iron Man Match between Triple H and The Rock, the McMahon-Hemsley regime had one final opportunity to put The Rock in jeopardy. Believe it or not they did just that as The Rock would compete in the first Handicap Lumberjack Tables Match. Also of note this episode featured Gerald Brisco “stealing” the Hardcore Championship from Crash Holly.

Two weeks before the showcase of the immortals where the WWE Universe is destined for the showdown between Stone Cold Steve Austin and The Rock at WrestleMania X-Seven. This episode of SmackDown featured the build to that match with a great sit-down interview with JR and Steve Austin and a No Disqualification Match between the Texas Rattlesnake and Kurt Angle in the main event with The Rock at ringside…

After an absence of a few months, a brand new episode of WWE Countdown will air after RAW. The episode will count down the biggest crybabies in pro-wrestling history. Interestingly, a few weeks ago the poll for this edition included some of the following names: Chris Jericho, Raven, The Miz, Eric Bischoff, Bret Hart and CM Punk! — can the WWE Universe have the audacity to pick CM Punk as one of the biggest cry babies in wrestling… Find out TONIGHT at 11:06PM EST! 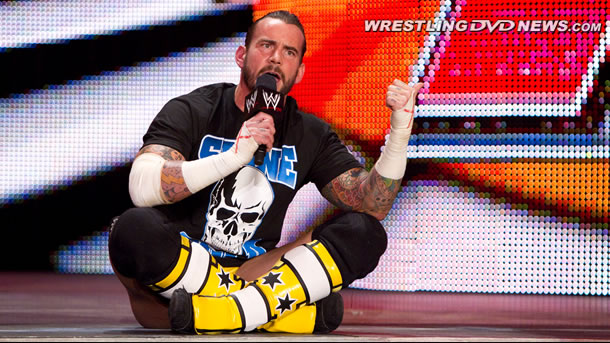 The other big new original show is the penultimate episode of The Monday Night War, which will air tomorrow night and is set to look at more WCW mistakes in the wake of the first Bischoff era: 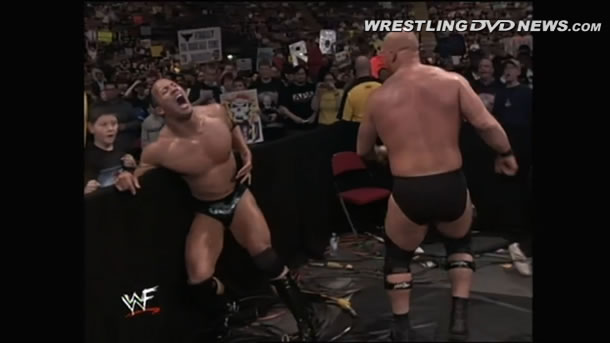 With the impending launch of the Network in the United Kingdom, buying a WWE PPV on Sky Box Office might well become a thing of the past for many. Back in 2001, us fellow UK fans were still getting UK exclusive PPV events in addition to the usual lineup, and I distinctively remember ordering Rebellion as a youngster all excited to see Stone Cold vs. The Rock. Well, how could you not be? This was their first match together one-on-one since that fateful night in the Astrodome where Rock was screwed, and he wanted his revenge!

That revenge didn’t come with a title switch though, thanks to some interference and calamity toward the end. It was a good match to go back and re-watch though and for me it still has the same sort of atmosphere to it that it did all those years ago, with a nice back and forth brawling style to it that reminded me a lot of their WrestleMania X-Seven match. Fans in North America might not have seen this bout outside of owning the DVD so why not check it out through WWE Network’s VOD library now? Fans in the UK can relive it later this month.