Another week has gone by in the world of the WWE Network and we are at the very last day of #FreeFreeFree, so if you haven’t tried out the service yet – why not?

Good news (kind of) for WWE fans from the Great White North, it appears that Rogers have received approval from the CRTC allowing the Network to air across Canada. This means that Rogers can begin to make deals to bring the WWE Network to other carriers across Canada. While it isn’t an over the top (OTT) Network like the U.S. and other countries – it is a step forward. If you still don’t want to go that route, just ask yourself “What would Lance Storm do?” — I’ll bet your answer is brought to you by the letters: N, V & P. 😉

Back to the OTT WWE Network, it held up great during the Survivor Series PPV (for the majority of users we heard from), even with all the extra added demand from the free users. In fact, it might have held up better than some of the “non-free” shows! Hopefully the steps WWE has taken here will be utilized going forward as well. Speaking of Survivor Series…

Of course Survivor Series happened this past week and provided us with a great main event. In that match, things were looking rather dark for Team Cena, amidst the onslaught of the evil Authority. Team Cena and the WWE Universe needed help, and for this help, they looked to the skies, they looked for someone who could strike fear into the hearts of The Authority. Against this army of shadows came a dark warrior, a purveyor of good, with a voice of silence and a mission of justice…. enter…. Sting! 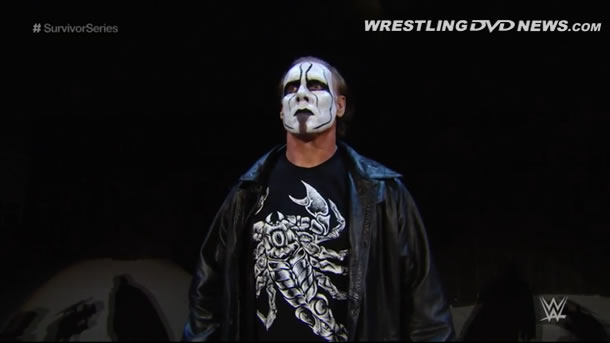 Of course this was by far the biggest story coming out of Survivor Series on the WWE Network. After a more than a 30+ year career, the man called Sting made his WWE debut – and it provided us wrestling fans with an iconic moment that I’m sure we won’t soon forget, all via the WWE Network; which while not free for much longer is very reasonably priced at just $9.99 — not sure if you knew that or not. 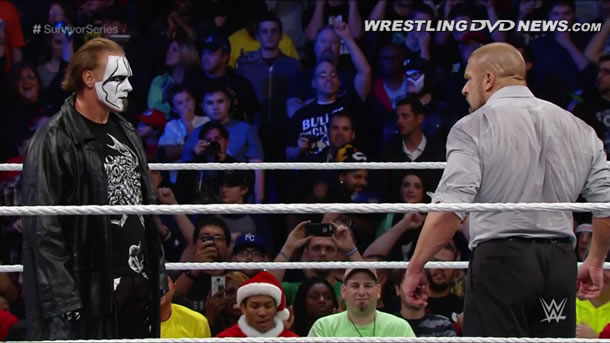 A 30 minute piece, “The Usos: 10 Hours to Houston”, aired this week after Raw and is available to watch on demand now.

The documentary was a short but enjoyable one. If you’re looking for a profile on The Usos and their in-ring WWE career so far, perhaps this isn’t for you as it largely sticks to the “Before They Were Superstars” theme, but regardless that makes for a very interesting look at their family background and how they ended up where they are now. 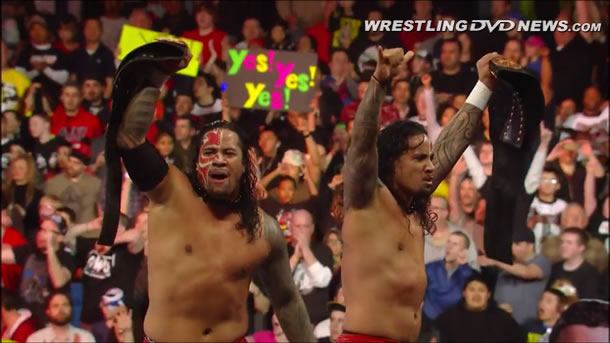 It was nice to see an interview with The Usos’ father Rikishi in here and touching to hear about the impact Umaga had on their lives and career before his untimely passing, which you’ll learn is where the “10 Hours to Houston” tagline of the feature comes from.

All in all, this was worth the watch. You could say it’s the type of thing we were once given on WWE DVDs but phased out in recent years. Check it out. 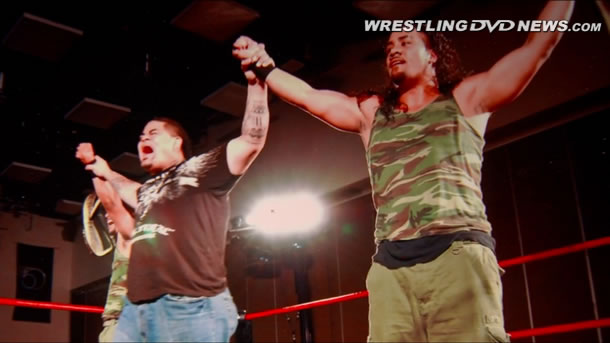 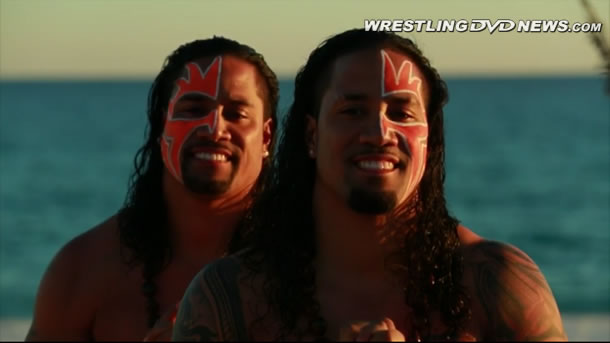 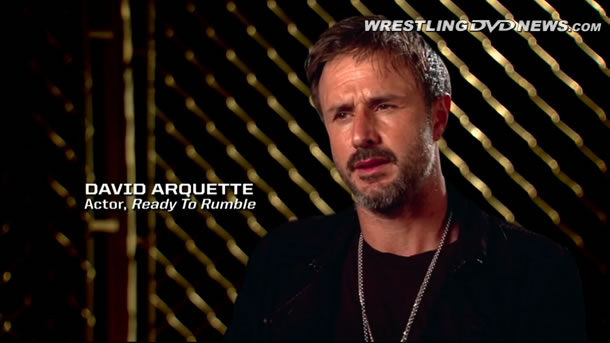 Also last week’s originally scheduled Rivalries episode looking at Triple H vs. Shawn Michaels did not air in the live stream. However, it was made available in the VOD section. This week there again doesn’t look to be a new Rivalries episode set to air. 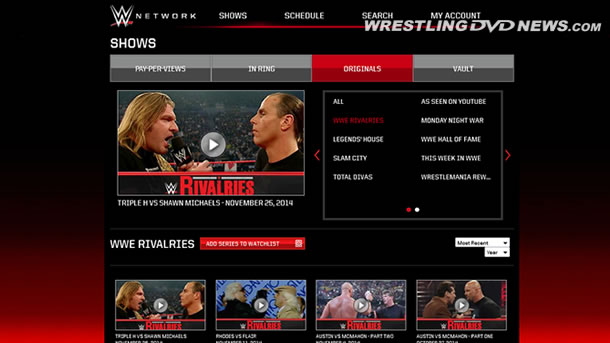 Also this week we saw two new sections added to the WWE Network, the first “As Seen on YouTube” which as you might suspect, features videos which were previously featured on WWE’s YouTube channel. The second new category is “Tribute to the Troops”, and thus far the 2005 and 2006 specials have been added, likely with more coming in the next few weeks.

The other big show coming to the prime 11:06 Monday night time slot this week will be a live special “podcast” hosted by the incomparable Stone Cold Steve Austin with his special guest: Vince McMahon. Now, I’m sure it will be more of a shoot interview style show than a “podcast” – we can only hope that WWE has learned from the ECW Exposed special and they have Steve Austin and Vince McMahon in a more relaxed setting. If the gloves are allowed to come off, this interview could be really good – we’ve all heard this week that a no holds barred podcast can make a rather big splash amongst the ‘rasslin community. 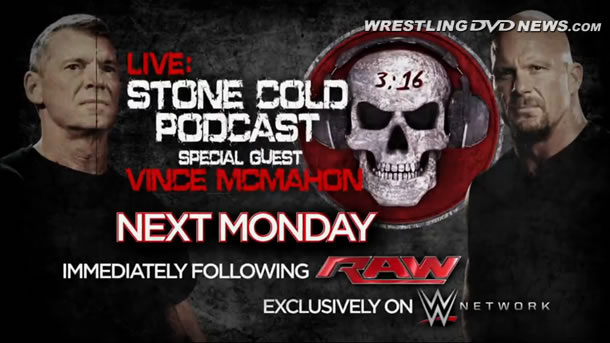 This week’s classic match comes from the final In Your House event of 1996 and honestly is a forgotten match, on a forgotten PPV! Mankind and The Undertaker had one of the best feuds in 1996; this match saw the end to the brief involvement of The Executioner (Terry Gordy) in the feud. This crazy match was ahead of its time and before the “hardcore” trend which would infiltrate WWE in the next few years. 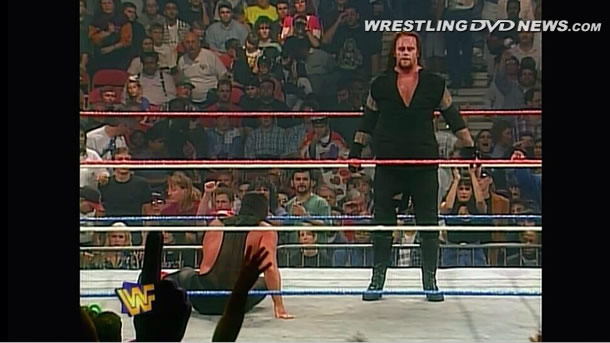 Armageddon Rules Match
The Undertaker vs. The Executioner
In Your House: It’s Time • December 14, 1996

The “Armageddon Rules” match was in actuality an old school “Texas Death Match” – the fore runner to the modern day last man standing match. On this December night in West Palm Beach, Florida, The Undertaker and The Executioner tore the house down (LITERALLY!). Mankind even became involved in the bout, before being dealt with in a very unique manner. If you’ve not seen the match, I won’t spoil it too much, but this is most definitely a fun match that you should check out this week.

If you’ve listened to Colt Cabana’s podcast with CM Punk, I’m sure you’ll know that towards the end of his WWE run, Punk had a few crappy nights. However probably none quite as craptacular as the December 5, 2013 edition of SmackDown – which you can of course check out on the WWE Network 😉