NEXT FOR 2018: WWE Releasing ‘The Shield: Justice For All’ DVD This July – With Unreleased Matches!

Welcome to The Shield of Justice.

Release the hounds because it’s official – WWE are producing a brand new Shield DVD for 2018 to be named “The Shield: Justice For All” (changed from the working title “The Shield: Rise and Fall”).

The 3-disc DVD set can already be pre-ordered by clicking here to Amazon.com.

As of last word this new release, the second DVD on the group following “Destruction of the Shield” in 2015, is scheduled to hit stores in the United Kingdom first on July 9th and follow a day later to the United States on July 10th.

Early information suggests that this one will be formatted as a match compilation that highlights the best of Seth Rollins, Dean Ambrose and Roman Reigns both as a team and as singles stars. Along with the matches will be newly-filmed interview segments with all three members of The Shield.

WrestlingDVDNetwork.com has exclusively learned that the current plan is for each of the discs in the 3-disc set to focus on one Shield member and therefore Rollins, Ambrose and Reigns will have their own disc of featured matches and moments in which that Superstar is the focus. Perhaps best of all, we have word that WWE will be adding some never-before-released matches to this collection!

The official synopsis for “The Shield: Justice For All” follows below.

They were a united front against injustice… The Shield was the most dominant group WWE has ever seen, and launched the careers of three of WWE’s most successful superstars. As dominant as they were as a trio, Dean Ambrose, Roman Reigns and Seth Rollins took WWE by storm, and each achieved incredible individual success. All three would go on to achieve the ultimate goal of being WWE Champion, and compete in some of the biggest matches in WWE history.

This set follows the journeys of Seth, Dean, and Roman as they compete with Legends like The Undertaker, Brock Lesnar, John Cena, and Triple H. Hear from the stars themselves, as they discuss the impact The Shield days had on their careers, and how it helped drive and mold them into what they are today. Even when apart, their brotherhood remains strong… and you never know when the Hounds of Justice might reunite again to help fight for a common goal.

This is the legacy of Rollins, Ambrose, and Reigns… The Shield. See their greatest matches in this new collection from WWE Home Video.

This month began with a bombshell announcement on April 1st that NXT TakeOver: New Orleans will be released on DVD as a bonus disc with the WrestleMania 34 Home Video in the UK.

Since our original post we’ve received a few updates on the NXT TakeOver bonus disc. For those asking, it’s still confirmed to be an exclusive for Europe and produced in the UK; the UK will get it through WWEDVD.co.uk and in store at ASDA, however it has now been revealed that the disc will also see a release in Germany for customers of Media Markt/Saturn and Amazon.de.

This will be a limited edition offering and the numbers allocated to each of those outlets is expected to be scarce, so if you’re in the UK or Germany we would urge you to pre-order WM34 online as soon as possible or get in store the week of release. For UK fans that’s week commencing June 4th, 2018.

WrestlingDVDNetwork.com has learned that the NXT TakeOver bonus disc will have a runtime of approximately 2 hours and 59 minutes. Below is the complete content listing:

Ladder Match for the NXT North American Championship
EC3 vs. Killian Dain vs. Adam Cole vs. Velveteen Dream vs. Lars Sullivan vs. Ricochet 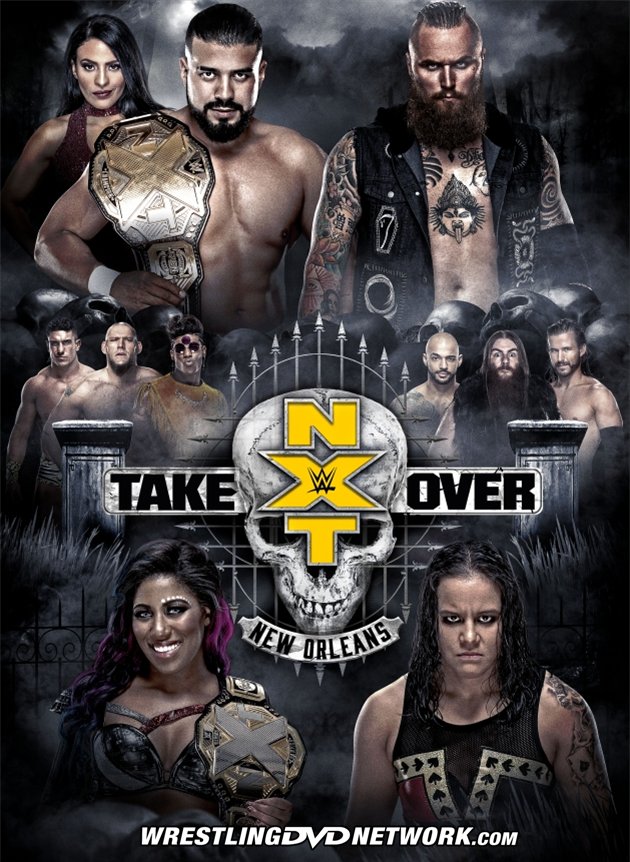 Speaking of WrestleMania 34, you may recall that while its DVD release in Australia was scheduled for May 23rd a Blu-ray edition had not surfaced with it raising some concern over its status.

However, we’re pleased to report that WrestleMania is coming to Blu-ray in Australia as normal – but it will instead follow two weeks later than the DVD, on June 6th.

The delay could mean that Madman Australia are once again partnering up with FremantleMedia, the UK licensee for WWE Home Video releases, whereby they make use of UK-made WWE Blu-ray discs (the UK and Australia share ‘Region B’ Blu-rays) but create their own retail packaging, thus making possible limited edition runs of Blu-ray titles they wish to sell for a short period in the territory.

With the final “Double Feature” now officially in stores as of this week, the next WWE DVD on the horizon will kick off the May releases: “Twist of Fate: The Best of the Hardy Boyz”.

This week we gave you a sneak peek at the TNA footage that has been added to the Hardys DVD which marks the first time ever WWE has used TNA material in their product, DVD or otherwise. The story is creating lots of buzz online and Matt Hardy himself has made reference to it on Twitter.

Through all of that commotion you may have forgotten that this WWE DVD will be produced with two different editions of cover artwork! A close-up split-face shot of Matt and Jeff will be made available as a Best Buy exclusive offering in the United States, while fans in the UK are going to be treated to both covers in the same purchase by way of a unique reversible sleeve.

WWE Home Video UK have now given us a first look at both cover designs in the flesh: 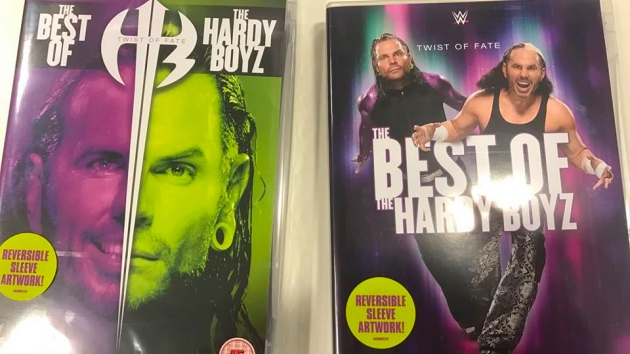