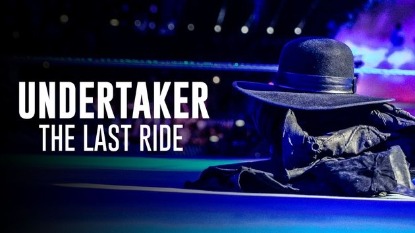 We told you there would be WWE DVD news this week worth Markin’ out for and today’s the big one, straight from Death Valley (well, WWEDVD.co.uk), we give you, “Undertaker: The Last Ride” on DVD and Blu-ray, with what looks to be the chance to grab it worldwide!

The acclaimed documentary series that looked back on The Undertaker’s storied history in WWE, while capturing the real-life challenges Mark Calaway faced coming to grips with a career nearing its end, is confirmed to be one of the WWE DVDs closing out the 2020 schedule with a release now pencilled in for late November.

Three editions are in the works including a “30th Anniversary Collectors Edition” (on Blu-ray!), named as such because this Home Video release will hit stores almost exactly 30 years since The Deadman debuted at Survivor Series 1990! 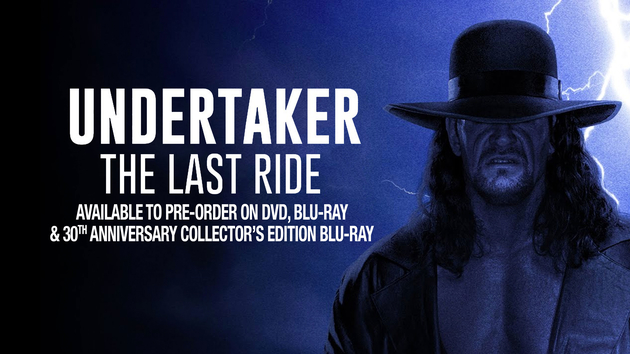 Early information we’ve received suggests the DVD is on the way worldwide!

UK fans are lucky enough to be able to pre-order from today here on WWEDVD.co.uk.

It’s also coming to Blu-ray! Early information we’ve received suggests the Blu-ray release may be an exclusive to the UK and Europe.

Again, fans in the UK can pre-order the standard Blu-ray from today here on WWEDVD.co.uk.

A phenomenal Collector’s Edition, the “30th Anniversary Collectors Edition”, will be produced in Blu-ray format too! As of now, this is another exclusive to the UK and Europe. We’ve been told this special version will be strictly limited to 666 copies.

The “30th Anniversary Collectors Edition” will feature: The Last Ride on Blu-ray, exclusive artwork (each copy individually numbered), a mini Undertaker comic, and a photo hand-signed by ‘Taker himself! 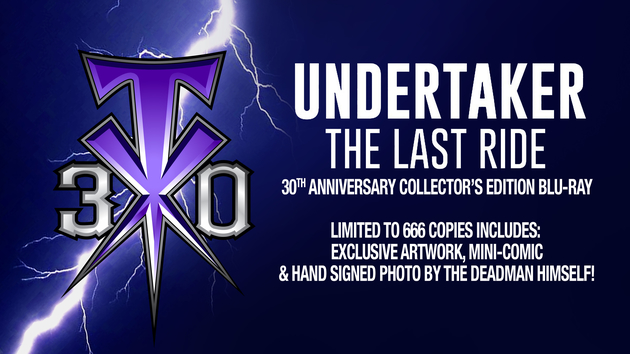 WrestlingDVDNetwork.com has learned that in addition to the DVD/Blu-ray presenting all of the episodes in the series, it will also include the animated bonus episode “Tales from The Deadman”. If there’s space remaining on the Blu-ray edition, we hear there’s potential for WWE to approve some additional extras on top, but that’s still to be confirmed.

When can we grab it? We have a confirmed UK release date right now of November 23rd, 2020. 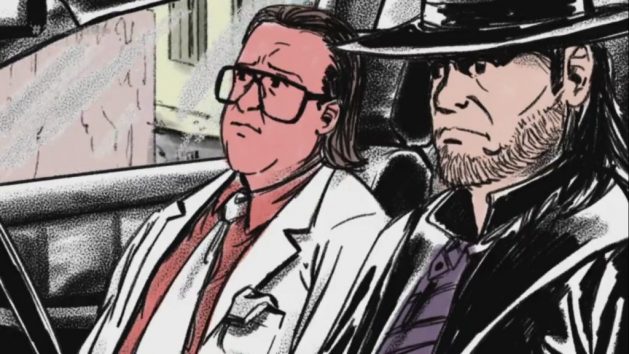 Get a rare and revealing look at Mark Calaway, the man behind The Undertaker, as he prepares for the final match of his storied WWE career against Roman Reigns at WrestleMania 33.

The Undertaker’s greatest fear is realized as his disappointing performance against Roman Reigns fuels the Dead Man to rebuild and redeem himself in a match against John Cena at WrestleMania 34.

Chapter 3: End of an Era

Fresh off his stellar performance at WrestleMania 34 against John Cena, The Undertaker seeks closure on his 30-year career in a series of matches with the men he respects the most – Triple H, Shawn Michaels and Kane. With a dream scenario involving all four Legends at WWE Crown Jewel, the stage was set for The Phenom to ride off into the night.

Chapter 4: The Battle Within

Seeking a storybook ending for his legendary career, the Undertaker’s mental and physical struggles come to a head in Saudi Arabia, with disastrous results. And in the wake of that catastrophe, Mark Calaway makes a major decision regarding his future as the Undertaker.

With The Undertaker seemingly content calling it a career after a successful match at WWE Extreme Rules, the lure of a WrestleMania dream match with AJ Styles brings The Deadman back for perhaps his last ride at The Showcase of the Immortals.

Speculate no more – the empty slot for a “premium” title on the WWE Home Video schedule is in fact “Undertaker: The Last Ride”.

Make that three slots now we’re getting a DVD, a Blu-ray, and a Collector’s Edition!

For the latest updates on the release and to be notified once pre-orders are ready in the United States and Canada, please join our free email list by entering your address here: