It’s that time again (as WrestlingDVDNetwork.com turns 12 years old this month) when we take a look at the cover artwork, content, and planned special editions for the WrestleMania DVD!

We’ve got our hands on the full content listing WWE has finalized for WrestleMania 38 on DVD and Blu-ray, which will be formatted as the usual 3-disc set on DVD and a 2-disc set on Blu-ray. The listing reveals that for the DVD version, similar to last year’s WrestleMania 37 release, Night 1 of ‘Mania will be featured on the first disc and Night 2 on the second disc.

However, the two main events of both evenings — Kevin Owens vs. Stone Cold Steve Austin, and Roman Reigns vs. Brock Lesnar — will be featured together on the third disc of the DVD, and along with those matches will be The Undertaker’s Hall of Fame induction speech as an extra! 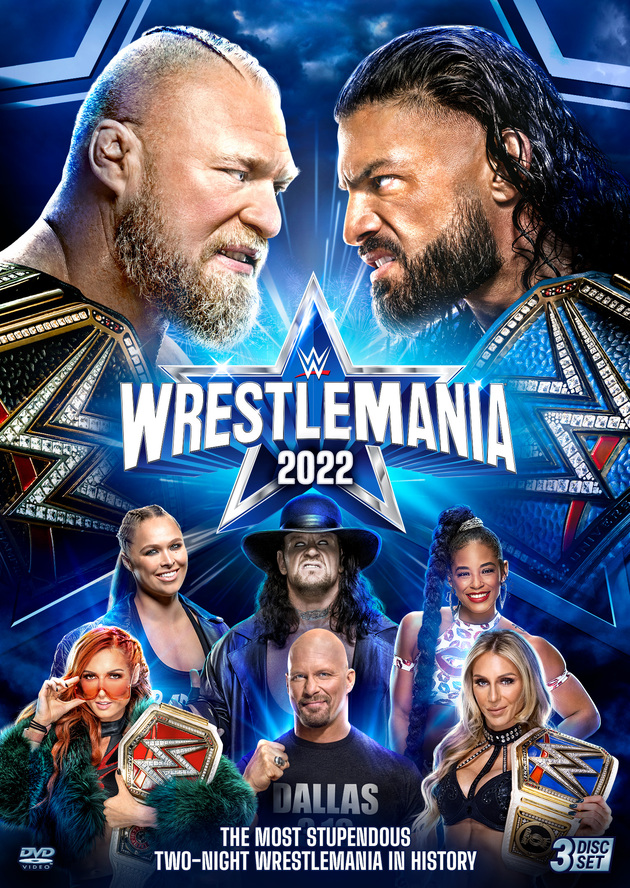 PRE-ORDER IN THE US: Grab your copy of WrestleMania 38 in the United States; click here to Amazon.com for the 3-disc DVD or here for the 2-disc Blu-ray.

The Most Stupendous Saturday in History

Seth Rollins vs. An Opponent of Mr. McMahon’s Choosing

The Most Stupendous Sunday in History

A Message from The Game 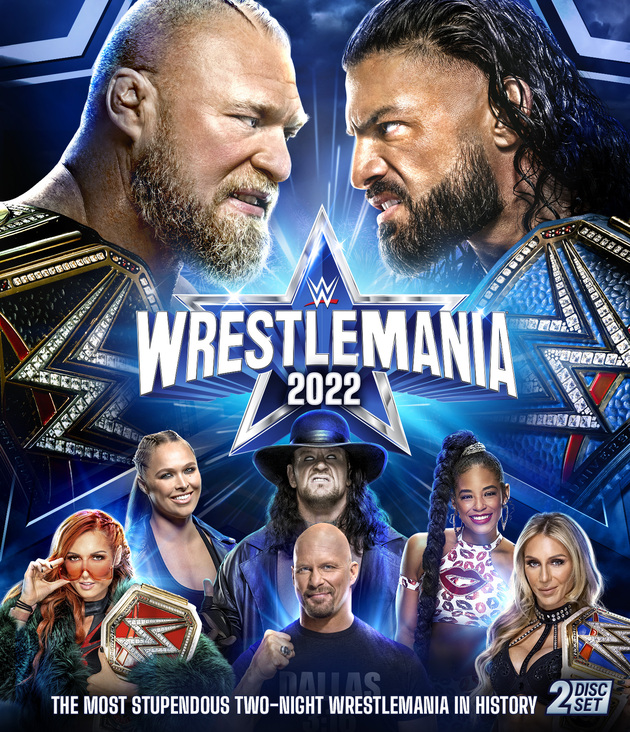 PRE-ORDER IN THE UK: Heads up, WrestleMania 38 is also now available to pre-order in the UK; click here to Amazon.co.uk to grab the 3-disc DVD or here for the 2-disc Blu-ray.

The KO Show Comes to Texas

Fremantle in the UK will be offering WrestleMania 38 with alternate cover artwork!

The standard cover artwork seen earlier puts the main focus on Roman Reigns and Brock Lesnar, while the alternate artwork features closer-up shots of all the stars, including legends Stone Cold Steve Austin and The Undertaker! Check it out: 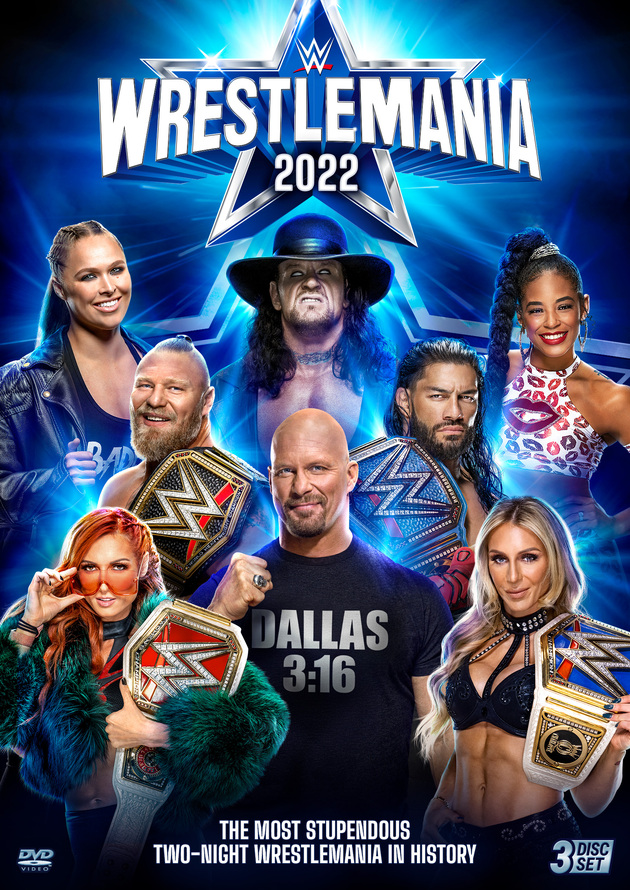 UK fans get a choice between the two covers because there’s versions with or without the alternate artwork. Also of note, the UK editions of the ‘Mania DVD will once again be produced in Digipak packaging for that premium feel.

In Germany, the alternate artwork (DVD) will also be a retail exclusive like in the UK, with that retailer still to be confirmed.

To break this down, the following are all the UK editions planned:

UK pre-orders for the exclusive versions placed directly with WWE Home Video UK via WWEDVD.co.uk will also include an exclusive WrestleMania 38 pull-out poster (A3 size) and a free drawstring bag. 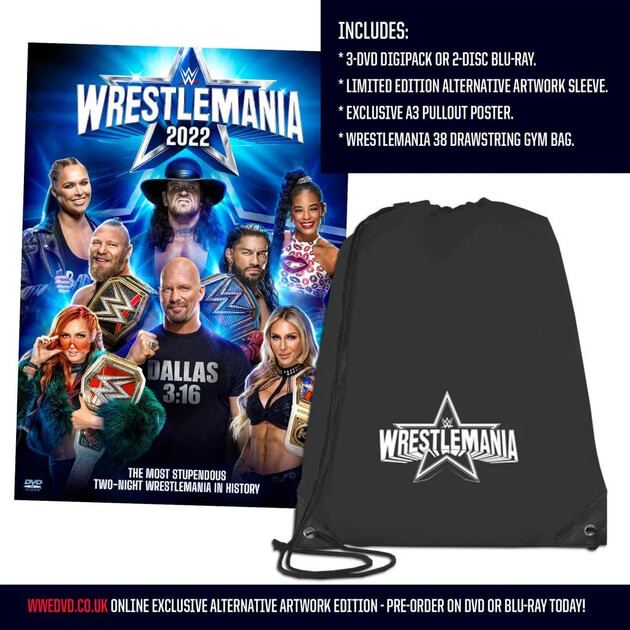 If all that artwork wasn’t enough, the front and back covers for WWE Home Video UK’s upcoming “Ruthless Aggression 2” DVD are ready to be revealed! 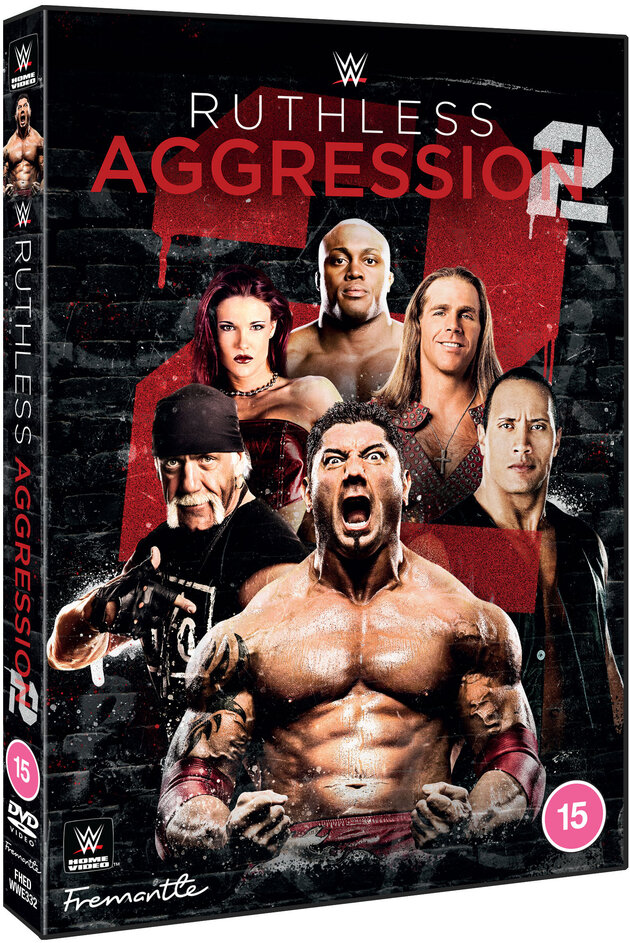 Each episode of WWE Ruthless Aggression 2 goes in-depth and takes you behind the scenes of the most transformative periods in WWE’s history. From the creation of innovative matches such as the Elimination Chamber, the Money in the Bank and the first WWE Women’s Revolution, this series brings you through all the top moments that inspired an entire generation of the WWE Universe.

In this collection, you’ll be able to relive The Rock’s electrifying Hollywood debut, the shocking return of Shawn Michaels, and the rise of future Superstars John Cena, Brock Lesnar, and Batista. For the first time ever, hear the true stories from the Superstars who changed sports entertainment forever and created a brand new era for WWE. 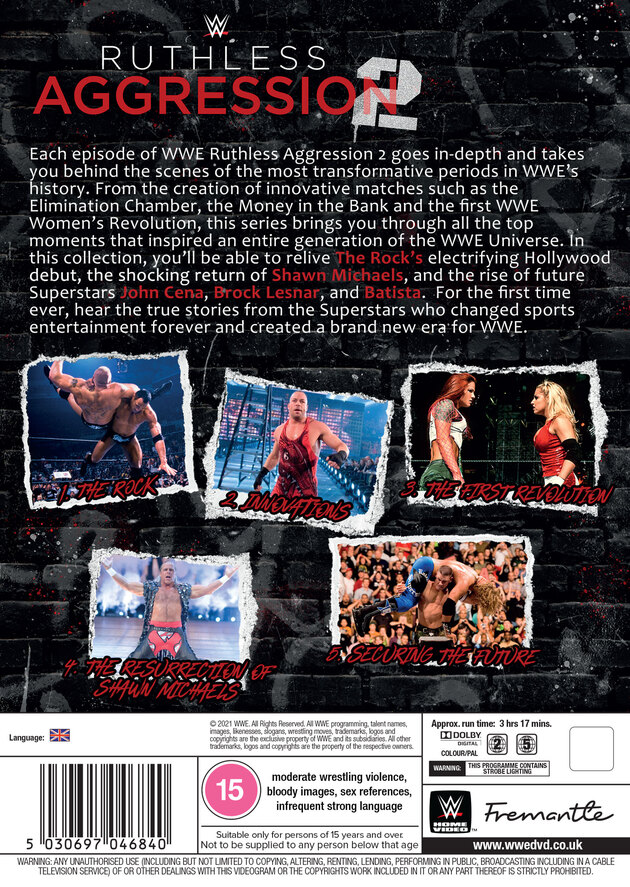 Fans in the UK will be treated to the exclusive “Ruthless Aggression 2” DVD on May 2nd, 2022. Available to pre-order now on Amazon.co.uk.