News making the rounds is that WWE has surveyed fans to gauge interest in potential new DVD and Blu-ray ideas, which include some controversial topics and the possibly of WWE Network shows being released in physical form.

Here we have a look at the survey questions, which were sent out earlier this week to “Fan Council” members. We’d like to give a shoutout to Chris Riddle for the screenshots.

The survey reveals that under consideration now are DVD releases for the WWE Network shows Legends’ House, WWE Countdown, WrestleMania Rewind and The Monday Night War. The first season of Total Divas is also listed as a possibility.

Under the name “Legendary Biographies” are 3-disc DVD/Blu-ray ideas for big names in WWE history, with a documentary portion making up the first disc of each set. This is described as similar to ESPN’s “30 for 30”. As you can see in the screenshot, three Superstar options among others for that question were Sunny, Brock Lesnar and Hulk Hogan. 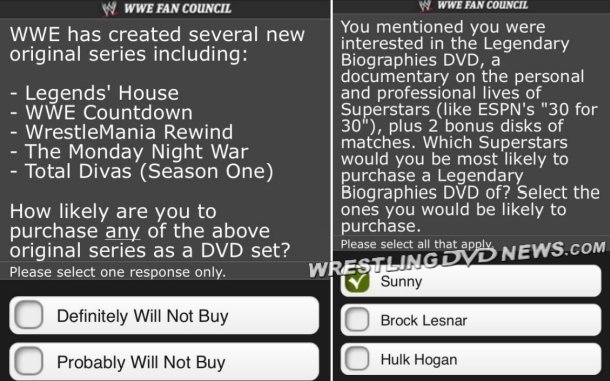 The “WWE Reveals” DVD concept looks to be all about the most controversial moments in wrestling history. Potential topics for the DVD series include Jerry Lawler vs. Andy Kaufman, “The Curtain Call”, the “Dr. Death” David Schultz slap, Owen Hart’s tragic passing, Mike Tyson coming to WWE after time in prison, and a documentary on the XFL. 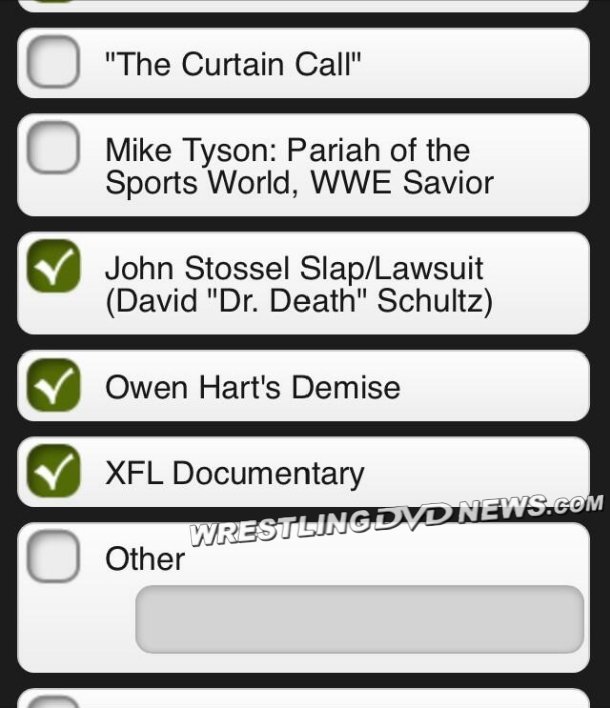 PWInsider reports that the survey also mentioned DVDs documenting the real lives of current WWE Superstars, and a “One Man Show” concept in which WWE legends tell stories on stage (inspired by the shows Mick Foley and Jim Ross have been involved with in recent years).

Go here to Highspots.com and find the $5 DVD banner at the top of the page to see all of the deals up for grabs. You’ll find ROH titles, WWE titles and other promotions too.

We have a factory sealed nWo: Back in Black DVD (Region 1 or Region 2 format) up for grabs. All you’ve got to do is enter on Twitter with the two simple steps below. 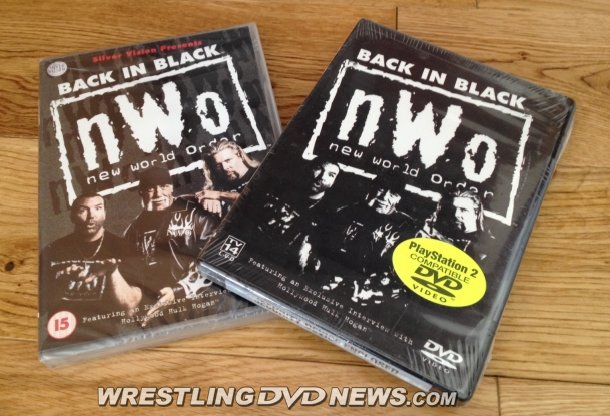 In the videos below YouTube personality “Gemni888” gives his picks of the top 10 must-own wrestling DVDs, and 10 to avoid completely! Which DVDs would make your lists?