Today WrestlingDVDNetwork.com treats you to an early look at WWE’s Super Show-Down DVD!

This 2-disc DVD is not actually due to hit stores for another 2 weeks from now (November 26th via Amazon.co.uk, November 27th via Amazon.com) but with thanks to WDN reader Robert Emons we’ve got a set of exclusive pre-release photos.

It’s the third and final WWE Home Video of November as we move closer to a new year of releases. 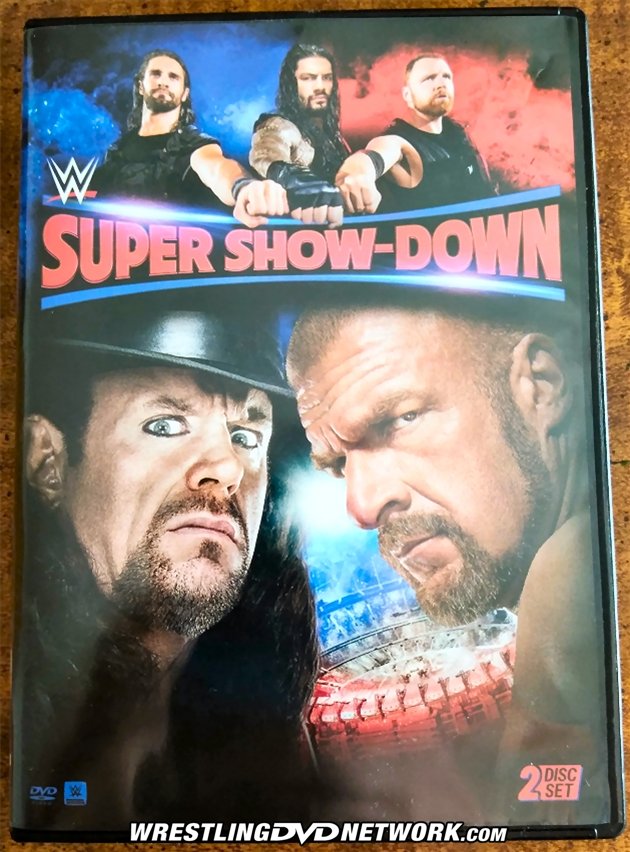 The Undertaker and Triple H are most prominently featured on the cover art as those two legends would do battle one-on-one for the Last Time Ever in the main event of Australia’s biggest WWE live event to date. The Shield, also shown on the cover, took on Braun Strowman, Dolph Ziggler and Drew McIntyre in a 6-man tag, on a night that saw the in-ring return of John Cena, a SmackDown Women’s Championship contest between Becky Lynch and Charlotte Flair, and more! 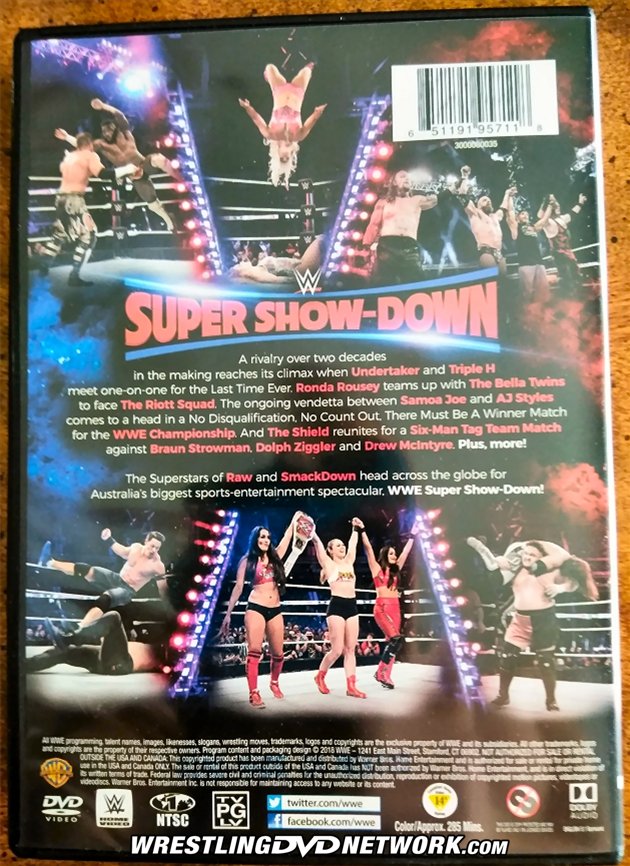 A rivalry over two decades in the making reaches its climax when Undertaker and Triple H meet one-on-one for the Last Time Ever.

Ronda Rousey teams up with The Bella Twins to face The Riott Squad. The ongoing vendetta between Samoa Joe and AJ Styles comes to a head in a No Disqualification, No Count Out, There Must Be A Winner Match for the WWE Championship. And The Shield reunites for a Six-Man Tag Team Match against Braun Strowman, Dolph Ziggler and Drew McIntyre. Plus, more!

The Superstars of RAW and SmackDown head across the globe for Australia’s biggest sports-entertainment spectacular, WWE Super Show-Down!

The extras here are unique in that they all center around the build-up to Super Show-Down’s main event with RAW segments involving The Undertaker, Triple H and Shawn Michaels – extras list.

Unfortunately a Topps trading card was not found in the packaging of this one. 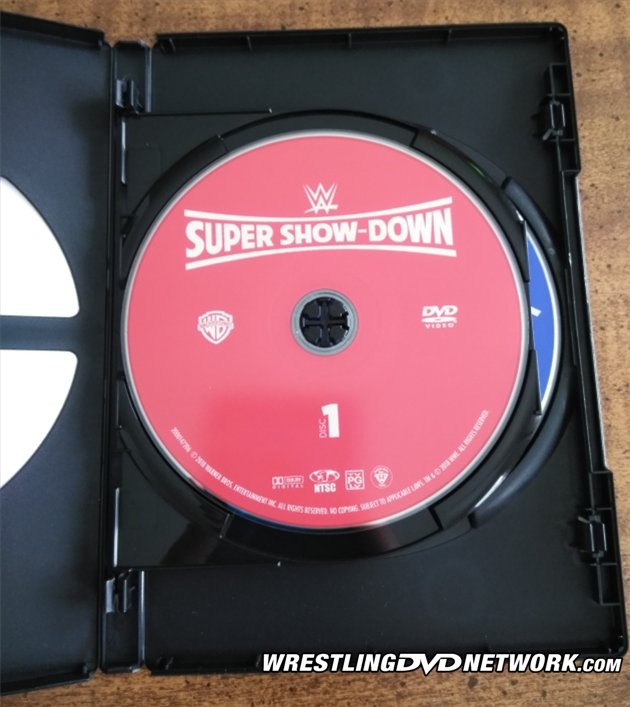 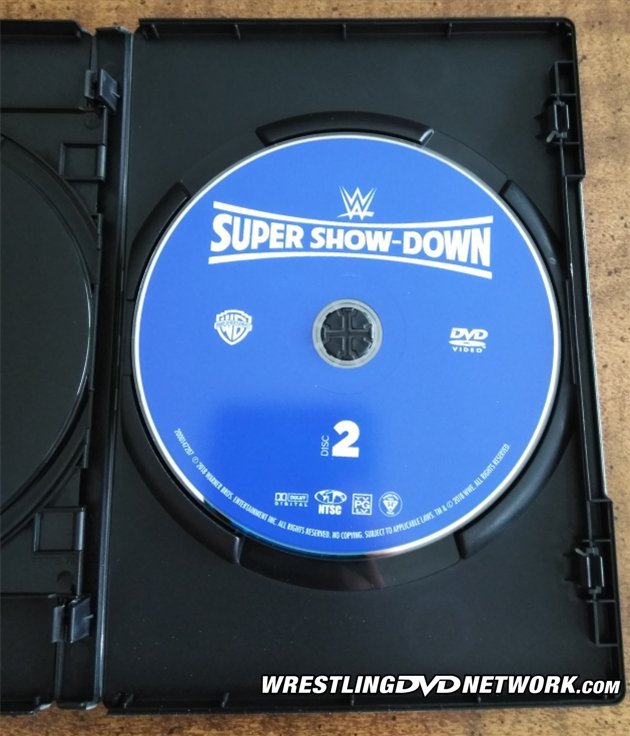 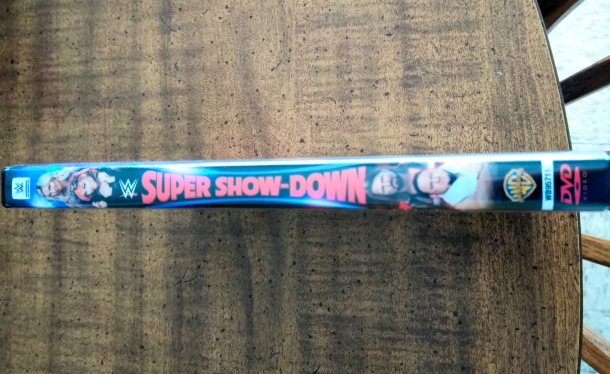 Before then, the Greatest Royal Rumble PPV finally landed on Home Video this week!

This is also another 2-disc DVD set and it’s in stores now; fans in the United States can grab a copy for $14.96 by clicking here to Amazon.com. UK fans, Amazon.co.uk has it in stock for £15.99. 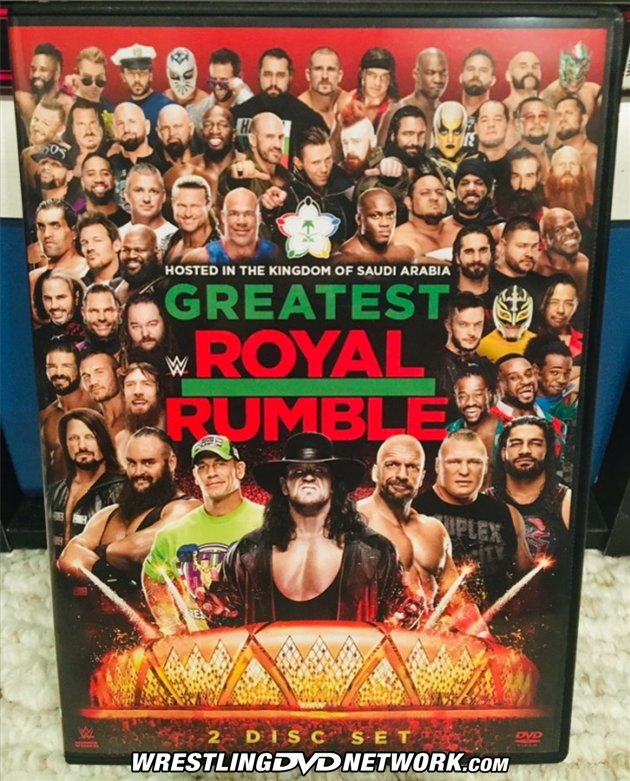 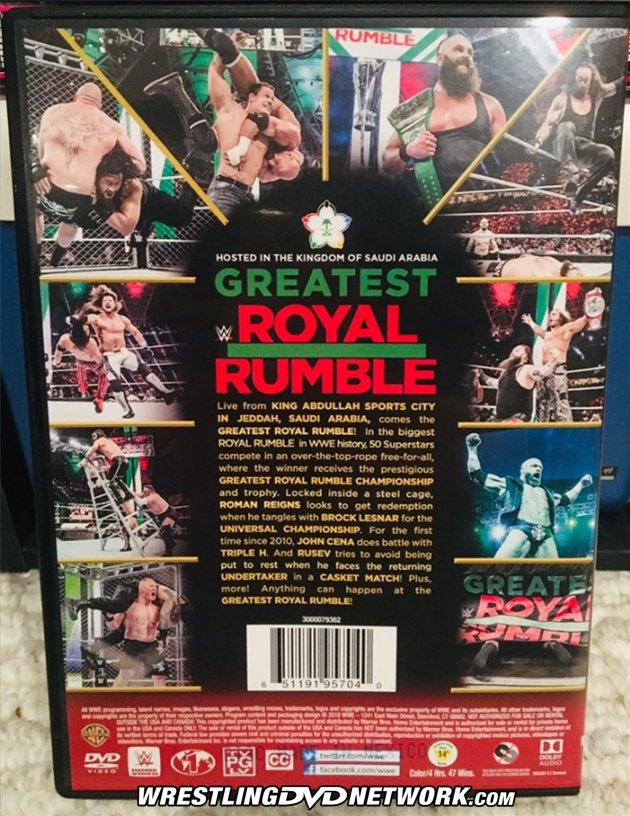 A stacked international super-show in its own right, Greatest Royal Rumble was of course headlined by the first-ever 50-man Royal Rumble match. It also played host to Triple H vs. John Cena, Brock Lesnar and Roman Reigns in a Steel Cage, an Intercontinental Championship Ladder Match, and an appearance by The Undertaker in a Casket Match!

Special thanks to WDN reader Matthew Tremble for sending in these pics. 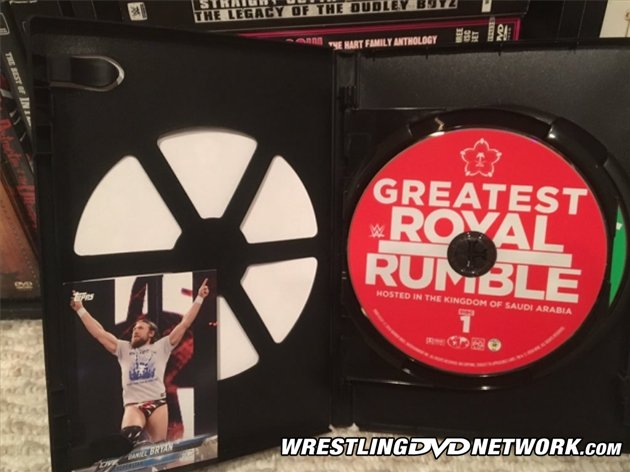 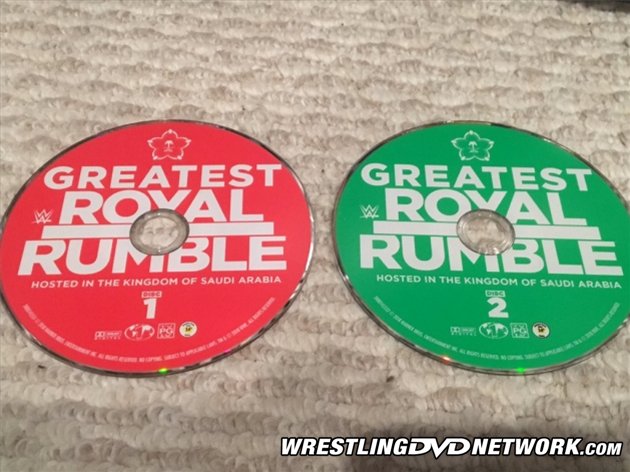 Locked inside a steel cage, Roman Reigns looks to get redemption when he tangles with Brock Lesnar for the Universal Championship. For the first time since 2010, John Cena does battle with Triple H. And Rusev tries to avoid being put to rest when he faces the returning Undertaker in a Casket Match! Plus, more! Anything can happen at the Greatest Royal Rumble!

A 10-man tag match a 6-man tag match from RAW and SmackDown Live episodes in the run-up to the show will be included as bonus content – extras for Greatest Royal Rumble.

We’re pleased to report that all first-run copies of this DVD include a Daniel Bryan trading card! 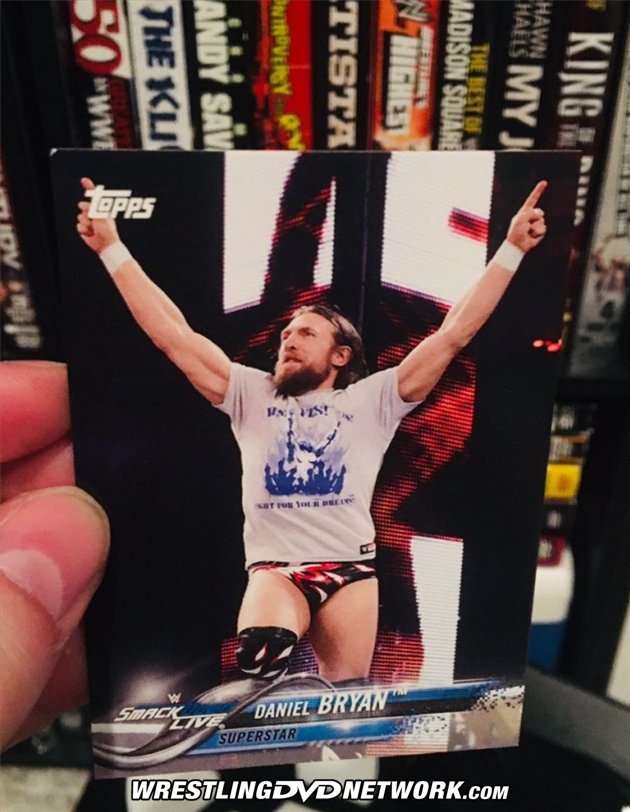 – UK/Europe: RIGHT NOW! Get the Greatest Rumble 2018 DVD over on Amazon.co.uk. 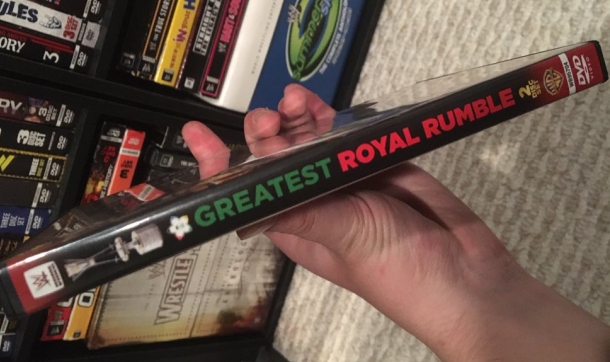