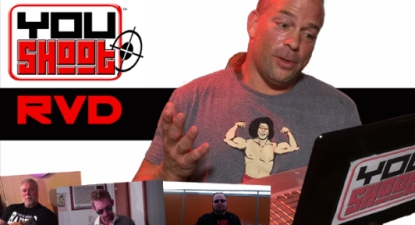 Kayfabe Commentaries‘ ever-popular “YouShoot” series is back with a truly “one of a kind” edition in “YouShoot: Rob Van Dam”.

For those that don’t know, “YouShoot” is a shoot interview series in which fans, through a variety of platforms, ask the questions with host Sean Oliver leading the discussion. The program is broken into chapters, each focusing on different aspect of the wrestler’s life and career. For “YouShoot: RVD” the topics include: “Early Days”, “Heat”, “WWE”, “Weed”, “Sex and Drugs”, “Potpourri”, “WWECW”, “The Dirt”, “TNA”, “On the Road”, “The Boys”, and “ECW”. 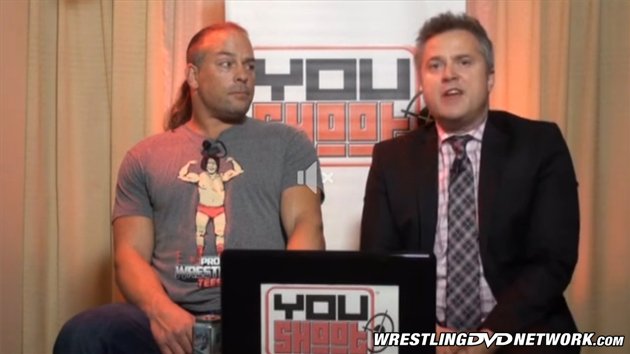 We start off with “Early Days” during which Van Dam talks about kissing Ted DiBiase’s foot to win $100 in 1987 when he was 16, money Van Dam says he spent on comic books. Talk turns to training with Sabu and the Original Sheik and working T.C. Martin’s National Wrestling Conference promotion in Las Vegas where Van Dam developed many of the double-team moves later seen in ECW with a wrestler named Bobby Bradley as part of the team Aerial Assualt.

Next up is “Heat” where RVD admits he was an “a–hole” when he debuted in ECW. RVD talks about striking a “special” fan who wound up bringing “I sued Rob Van Dam” signs to the arena. Van Dam talks about Shane McMahon “stealing” the Van Terminator, the real life fight between himself and Taz, and friction with AJ Styles in TNA. Van Dam doesn’t know if Triple H held anyone down in 2002 – 2003 but that the perception was real in the locker room because Triple H was going over while at the same time having a hand in booking. “Heat” wraps up with a fun game of “Pick a Hand”, where Sean Oliver presents a name and RVD explains if he ever fought the name in question or ever wanted to. Names include Vince McMahon, Bob Holly, John Cena, Chris Jericho, Shawn Michaels, and Triple H among many others. And yes, of course he wanted to fight Vinnie Mac! 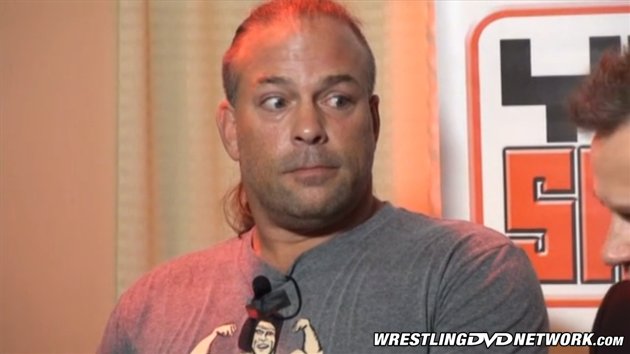 In “WWE” Rob Van Dam comments on his love of working with Jeff Hardy, transitioning to the WWF locker room in 2001, thoughts on the “Invasion Angle”, and his reaction to fan interference during the famed “Ladder Match” with Eddie Guerrero. Van Dam explains how Vince McMahon would go out of his way to get to know talent, no matter how awkward, and how the lack of a relationship with Vince hurt his chances at a top spot. Finally, Van Dam decides which belt meant more to him – the WWE Championship or the ECW World Television Championship, an answer sure to surprise.

“Weed” is just that; a long conversation on RVD’s thoughts on marijuana, how he first smoked on his 21st birthday in Jamaica, and why big business won’t get behind legalization. In “Sex and Drugs” RVD plays the infamous “What’s in the Bag” game and even gives his thoughts on what a drug-free ECW locker room would have been like. The chapter comes to a close after a game of “F—, Marry, Kill” involving Sunny, Francine, and Kimona. 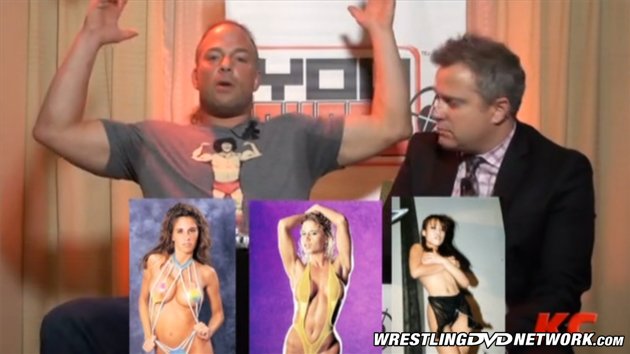 “Potpourri” covers everything from teachers messing up his last name, meeting Jean-Claude Van Damme, and what RVD does with all of his old ring attire. Next up is a discussion of “WWECW” and what Van Dam thought of the first two One Night Stand events, how much Vince and Shane were involved, and if the ECW revival could have ever worked. Talk moves to “TNA” where Van Dam reveals what he liked best and least about his time in TNA, thoughts on his run as World Champion, why he really left the company and how close he was to coming back.

The program wraps up with a quick discussion of “ECW” including what his favorite series of matches were, Sabu or Jerry Lynn, Todd Gordon leaving ECW, the FTW title, the Mass Transit Incident, the infamous crucifixion angle, and if he still keeps in touch with any ECW Originals. 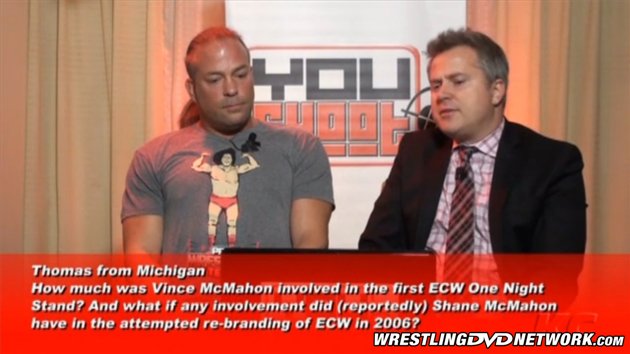 Other topics discussed include thoughts on Bob Holly, Jamie Dundee, The Sandman, Insane Clown Posse, and Louie Spicolli. RVD also talks about ribs, who was the stiffest worker he worked with, who his favorite partner was, and what he really thinks of CM Punk walking out of WWE in 2014.

Clocking in at 2 hours and 26 minutes, “YouShoot: RVD” is hands down one of the most entertaining “YouShoot’s” yet and is a must-own for any RVD fan. From marijuana to the Mafia, WWE to FMW, Rob Van Dam takes on all questions in an honest, compelling, and often hilarious interview that is quintessential Rob Van Dam and everything you would expect from him and from Kayfabe Commentaries.

“YouShoot: RVD” is available right now over at KayfabeCommentaries.com

You can purchase a physical DVD copy or stream it instantly On Demand!