WrestlingDVDNetwork.com has your exclusive first look at the cover artwork for WWE’s new “NXT – BEST OF 2017” DVD! 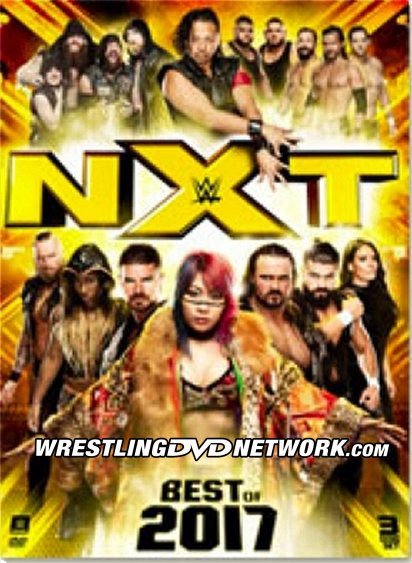 The cover will feature more than 15 Superstars seen on the NXT brand during 2017, headed up by Asuka and Shinsuke Nakamura. This lower-than-usual quality shot of the cover (above) is the only one available right now; consider it an official first draft with a few tweaks still possible.

“NXT – BEST OF 2017” has not yet been listed for pre-order but is expected here on Amazon.com either this week or next. The 3-disc DVD set was previously scheduled in the United Kingdom with a release date of March 26th, 2018. As of today we can now confirm that the release date to fans in the United States will come slightly earlier on March 20th, 2018.

The NXT 2017 retrospective promises to show off the developmental brand that’s forging the future of WWE; where future WWE Champions and Hall of Famers get their start, collecting together the best matches and moments witnessed this year on NXT’s weekly shows and TakeOver specials.

Along with the matches we’re all expecting, early word is that this DVD will include some never-before-seen footage. Specifically, a few post-show segments and/or live event footage, one of which will be Tye Dillinger saying farewell to NXT before he moved up to the main roster.

The future is here! We Are NXT!

Witness the next generation of WWE first hand and relive the greatest NXT matches of 2017 with this definitive set featuring all the heart-stopping action from up-and-comers like Asuka, Bobby Roode, Aleister Black, Drew McIntyre, Sanity, Tye Dillinger, and more!

Joining the NXT DVD in March will be the Home Video release of Royal Rumble 2018.

On the subject of PPVs, new information we’ve received suggests that there may be a Roadblock 2018 event airing on January 7th (before the Royal Rumble), with the DVD following a month later. This is unconfirmed for now and could have surfaced from outdated plans – update shortly.

What’s coming next? Check back in with WrestlingDVDNetwork.com soon to find out!